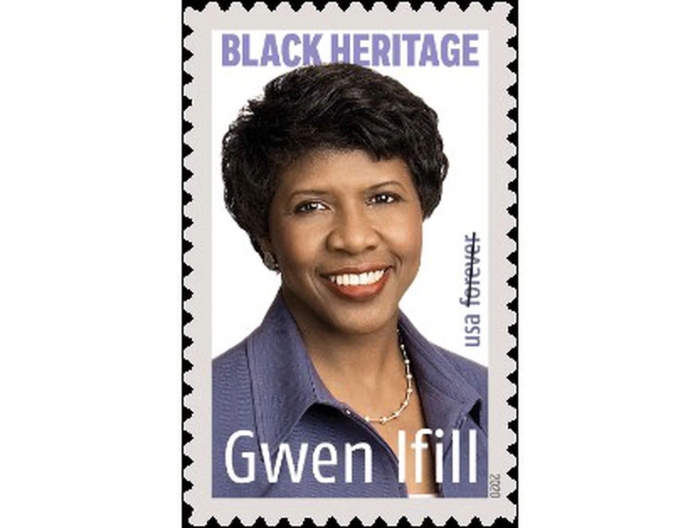 The stamp features a photo of Ifill taken in 2008 by photographer Robert Severi and designed by Derry Noyes, according to the Postal Service.

The stamp features a photo of Ifill taken in 2008 by photographer Robert Severi and designed by Derry Noyes, according to the Postal Service.

Among the first African Americans to hold prominent positions in both broadcast and print journalism, Ifill was a trailblazer in the profession.

Her mother, Eleanor Husbands, was from Barbados.

According to Ifill’s 2012 biography and interview with The HistoryMakers, her father’s ministry required the family to live in several cities in different church parsonages throughout New England.

Ifill’s interest in journalism was rooted in her parents’ insistence that their children gather nightly in front of the television to watch the national news, according to The HistoryMakers.

In 1973, Ifill graduated from Classical High School in Springfield, Massachusetts. Four years later, she received her B.A. degree in communications from Simmons College in Boston.

“During her senior year, she interned at the Boston Herald American newspaper,” the biography reads.

She later worked at the Baltimore Evening Sun, the Washington Post, and the New York Times before moving over to NBC News.

In 1999, Ifill became the first African American woman to host a prominent political talk show on national television when she became moderator and managing editor of PBS’s “Washington Week” and senior political correspondent for “The PBS NewsHour”.

“She was the most American of success stories,” Sherrilynn Ifill, a law professor, director of the NAACP Legal Defense Fund, and Gwen Ifill’s cousin told NBC News. “Her life and her work made this country better.”