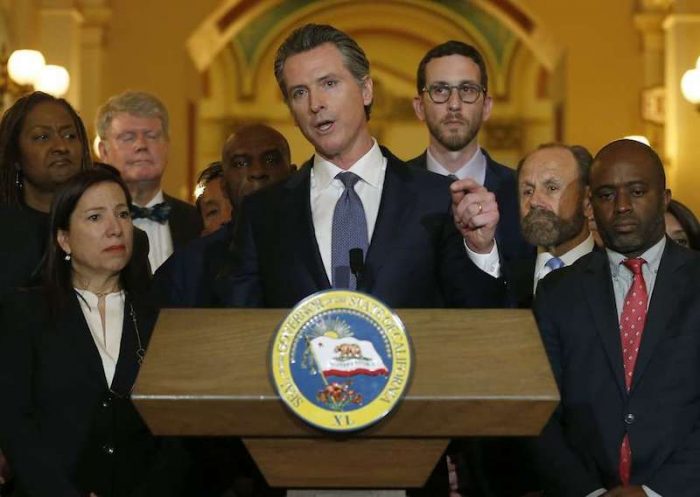 California Gov. Gavin Newsom discusses his decision to place a moratorium on the death penalty during a news conference at the Capitol, March 13, 2019, in Sacramento, Calif. (AP Photo/Rich Pedroncelli)

“You cannot deny the racial inequities when it comes to the death penalty,” said California Governor Gavin Newsom, which is why he recently announced a moratorium on the procedure here. As governor, Newsom said he could not “in good conscience” sign off on killing people, some of whom are undoubtedly innocent, as a result of a pre planned, pre meditated process. That is why, he told the press during a conference call on March 19, that the nearly 800 prisoners on death row will not face execution during his administration.

“Our death penalty has been a failure,” Newsom told reporters.

“It consumes our court system. It costs billions of dollars that could be redirected, It has provided no public safety benefit or value as a deterrent.”

Newsom has already ordered the closure of the state’s gas chamber and the removal of it’s equipment. The next step will be the consideration of commuting sentences on a permanent basis, from death to life without the possibility of parole. Only California voters can actually repeal the death penalty, something Newsom intends to ask them to do via the next ballot in 2020.

Californians rejected a ballot measure attempting to rule out the death penalty in 2016. In addition, they also voted for a measure that would speed up the process. But Newsom said that the state’s residents have “entrusted” him to do what he’s doing by way of California’s constitution.

“I have been crystal clear about my opposition to the death penalty for four decades now,” said Newsome.

“ For those who have followed [my political career] I don’t think it comes as a surprise. The constitution and the laws of this state afford me the right to do this. The law does not change; it will only change with voters or the Supreme Court.”

Proponents of victims’ rights and some lawmakers expressed chagrin toward Newsome’s decision, one victim’s relative calling it “Trumpian to override what voters decided and make a decision based on your own personal philosophy.”  But others have supported his decision wholeheartedly and some lawmakers are with Newsom in proposing a permanent dismantling of the death penalty on the next ballot. 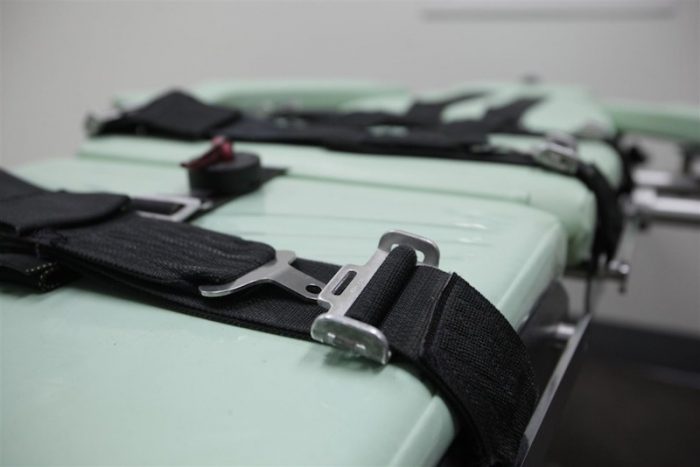 California’s Governor Gavin Newsom recently issued a moratorium on the death penalty in the state. He has shut down the state’s death chamber and removed its equipment. (AP file photo)

Almost ten years ago, a more than $850,000 upgrade to San Quentin’s execution chamber was completed. Since then, no execution has been carried out in the state. Newsom cited studies that he said showed overwhelming evidence that death sentences are handed out biasedly according to race.

“If you kill a White person you are more likely to be handed the death penalty,” he explained.

“If you are Black and you kill a White person, your chances are significantly higher. Between 2014 and 2018 the majority of death sentences in California came out of two counties; L..A. and Riverside. It matters where you live when it comes to prosecution and the death penalty.”

“To the victims, all I can say is, ‘We owe you and we need to do more and do better, more broadly for victims in this state … but we cannot advance the death penalty in an effort to try to soften the blow of what happened,’ ” Newsom said.

Democratic presidential hopeful, Senator Kamala Harris supports Newsom’s decision, she herself in support of a federal decision of the same manner. She called the process “immoral, discriminatory, ineffective, and a gross misuse of taxpayer dollars.”

“The symbol of our justice system is a woman with a blindfold,” she said. “It is supposed to treat all equally, but the application of the death penalty — a final and irreversible punishment — has been proven to be unequally applied” she said.