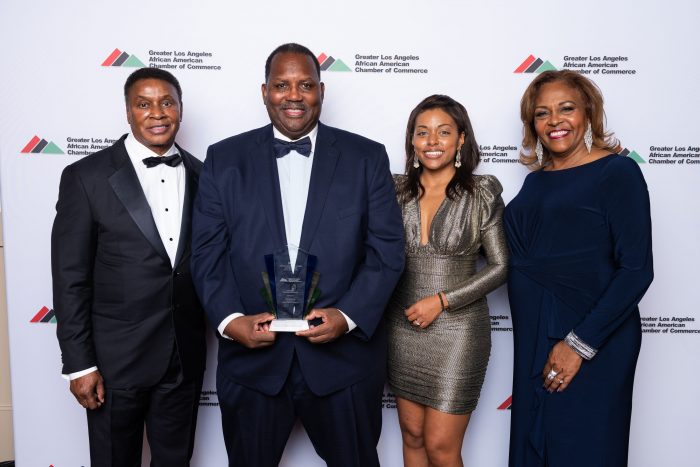 For the 26th year, the Greater Los Angeles African American Chamber of Commerce (GLAAACC) recognized individuals and corporations that championed the organization’s mission to “advocate and promote the economic growth and development of African American business.” Nineteen awards were presented during GLAAACC’s Economic Awards Dinner held at the JW Marriott L.A. Live in March.

“Minority businesses have come a long way and made many strides since GLAAACC started this awards gala in 1992,” said GLAAACC chairman, Gene Hale. “But access to opportunity always remains a challenge. That’s why we created this event to honor those who provide a bridge for African American businesses to get to the next level of success.”

Los Angeles World Airports’ chief executive officer, Deborah Flint gave the keynote address for the sold out, black tie affair. She spoke about Los Angeles International Airport’s plans to turn LAX and the surrounding area into a customer-focused airport environment through LAX’s $5.5 billion Landside Access Modernization Program (LAMP), the largest public works project in the history of the city of Los Angeles. Flint praised corporations and individuals during the evening for their efforts to even the playing field for minority businesses and provide access for growth.

Inglewood Mayor James Butts received the Special Recognition Award for his success in Inglewood’s recent renaissance. Butts is credited with negotiating the return of the NFL to Southern California and a number of other remarkable feats, including hosting the Super Bowl in 2022, Inglewood being the location for the 2028 Olympic Games opening ceremony and opening negotiations for the Los Angeles Clippers relocation to Inglewood. Pasadena Tournament of Roses president, Gerald K. Freeny and NBC Entertainment and Universal Television senior vice president, Programming Talent Develop and Inclusion, Karen Horne also received the Special Recognition Award.

Walter Hill, chairman and CEO of Icon Blue, a personalized promotional product manufacturer, received GLAAACC’s Lifetime Achievement Award. In the global trade industry, Icon Blue has earned the rank of star supplier and has received Supplier of the Year honors for over ten consecutive years from Fortune 500 companies.

Los Angeles County Supervisors Mark Ridley-Thomas (Second District) and Janice Hahn (Fourth District) were recognized with the Public Service Awards. During his almost three decades in public office, Ridley-Thomas has dedicated himself to bringing positive change to the social and economic problems for under-resourced and marginalized Angelenos. Since her election to the Los Angeles County Board of Supervisors in November 2016, Hahn has established herself as a leader in the struggle to end the current homeless crisis, a champion for communities plagued by pollution and health problems.

GLAAACC co-chair, Jamarah Hayner noted that in addition to acknowledging the contributions of businesses and individuals, the awards ceremony is also for small business owners to network and connect with peers and make new contacts to which they, otherwise, would not have access.

“This event has grown into the ultimate business event in Los Angeles. It’s an awards celebration, a business expo, a seminar and a networking event, all in one,” said Hayner. “When you attend this event, you’re really making a great investment in your business.”

For a full list of honorees and to view more photos from GLAAACC’s 26th Annual Economic Awards Dinner, visit GLAAACC.org.