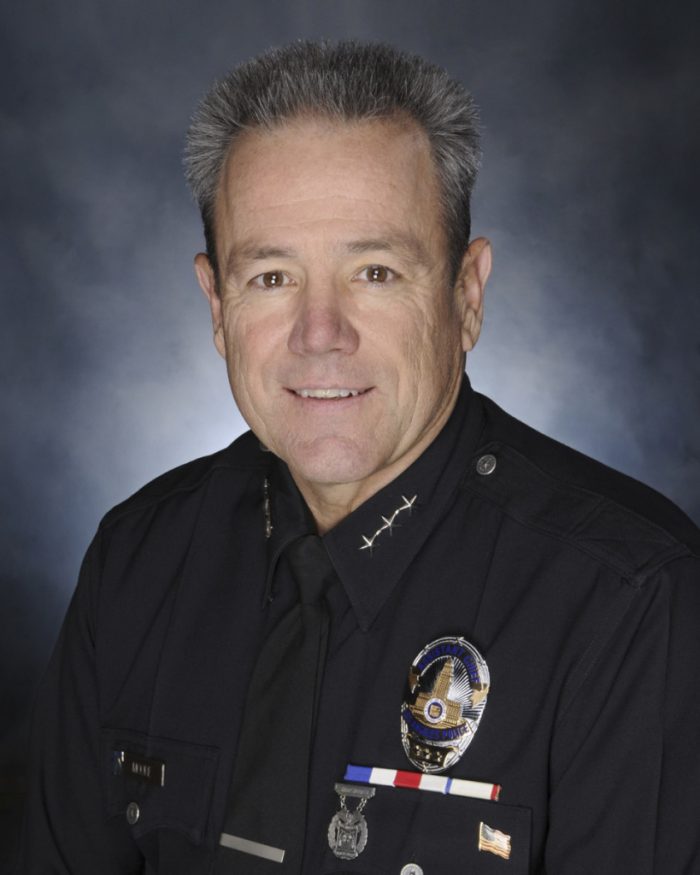 The City Council still must sign off on the selection of Moore, who has been with the department since 1981.
Garcetti was given three finalists to choose from by the Board of Police Commissioners, the civilian body that oversees the LAPD. They were Moore, San Francisco police Chief William “Bill” Scott and Deputy LAPD Chief Robert Arcos.

“In some ways this was the most difficult decision I have faced, and one of the easiest, because I knew whoever I picked would be great for this department,” Garcetti said. “In the end it was a tough decision, because I knew that Bill Scott, Bobby Arcos and Mike Moore were ready for this job, but today I am proud to announce that I am appointing Michel Moore as the 57th chief of police of the Los Angeles Police Department.”
Moore was also one of the three finalists chosen by the Board of Police Commissioners back in 2009, but then-Mayor Antonio Villaraigosa chose Beck. Moore has risen through the ranks of the department as a police officer, detective, sergeant, lieutenant and captain before taking on various high command roles. He was also placed in charge of the Rampart Division in 2000 in the aftermath of a scandal that found widespread abuse and corruption in the division.

Moore was born in Porterville, grew up in various parts of the United States and graduated from high school in Conway, Arkansas. Although he did not get into specifics, Moore referenced a difficult upbringing.
“As for who Mike Moore is, let me just say that I come from what can be described as a humble background,” he said. “I’ve grown up across this great nation. I’ve seen as a young child many challenging circumstances. And what I know is I came to the department as a young man looking to make a difference, and for the past 36 years I’ve felt that no other profession could have given me the amount of reward that this department has. Over the coming
days my story will inevitably be told more.”

Beck announced earlier this year that he would retire June 27, a year and a half before his second five-year term ends. He has led the department since 2009.

The choice of the next chief carries a significant amount of symbolic weight in light of the department’s troubled history on race relations, the current #MeToo movement bringing sexual harassment into the public debate, and President Donald Trump’s aggressive rhetoric and actions on immigration, although Garcetti said he made the selection based qualifications and not race or ethnicity.

Scott, who is black, was sworn in as San Francisco’s police chief on January 23, 2017, after 27 years at the LAPD, where he rose through the ranks to become a commander in 2012 and Deputy Chief of the South Bureau.
Arcos, a Latino, leads the LAPD’s Central Bureau, which includes downtown and parts of northeast Los Angeles.
Moore is in charge of LAPD’s patrol operations. Moore’s father was Basque, and he is listed as Hispanic on LAPD rosters.
“I said from the beginning I wasn’t looking to fill a demographic or make history,” Garcetti said when asked by a reporter why he did not choose Arcos considering the city’s large Latino population.
He added, “I wanted the best person for the job, and that’s Mike Moore.”
Some city leaders, including Councilman Joe Buscaino, a former LAPD officer, had called on the city to hire its first female chief after Beck announced his retirement. Sandy Jo MacArthur, who retired three years ago as an assistant chief, applied for the job but was not among the three finalists, and Assistant Chief Beatrice Girmala did not apply for the job despite being viewed by some as a potential top candidate.

When asked about his priorities, Moore first mentioned building trust in communities of color.

“The most important question of the moment may be, why do I want to be the next chief of police of this great city?” Moore said. “And it’s pretty simple. I wish to continue to momentum of building trust, particularly in communities of color, and improving public safety while we build a more diverse and representative department.”
The Los Angeles Police Protective League, the union representing rank- and-file officers, said, “We congratulate Assistant Chief Michel Moore on being recommended as LAPD’s next chief.”
“We are hopeful that if Chief Moore is appointed, he will take immediate action to address low officer morale stemming from our critically low police staffing and that he will be absolutely committed to collaborating on new ideas to reduce violent crime and prepare our city for the 2028 Olympics,” according to the LAPPL. “These are huge issues to tackle, but we’re ready to
roll up our sleeves and get to work with Chief Moore to move our department forward and improve public safety in Los Angeles.”

Los Angeles City Councilman Gil Cedillo, who had openly lobbied Garcetti to select Arcos, suggested the mayor’s selection would not be rubber stamped.

“Mayor Garcetti’s announcement today is the first step in the selection process. We now move to the next step, consideration by the City Council,” Cedillo said. “I look forward to engaging in a rigorous vetting process with my colleagues to ensure that our city and our police department’s leadership reflects the best of what our city is and can be. As council members, we represent 15 distinct districts and know what experience is most important to our communities. It’s within that framework that the council must make its decision to determine what experience matters most and who the next police chief will be.”