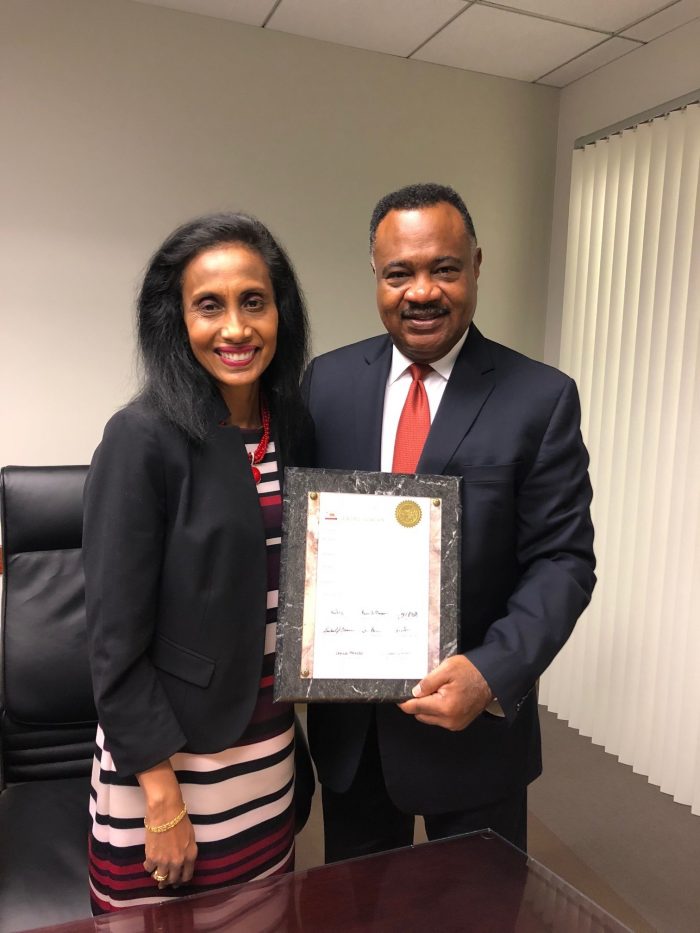 Franchise Tax Board Executive Officer Selvi Stanislaus presented Board of Equalization Member Jerome E. Horton with a resolution in recognition of his contributions to the FTB and his tireless advocacy for California taxpayers and small businesses. (Courtesy Photo)

The FTB executive officer, Ms. Selvi Stanislaus presented the recognition on December 7, 2018, at the Board of Equalization District 3 Office in El Segundo.

Board member Horton served on the Franchise Tax Board from January 2011 through December 2015. During Member Horton’s tenure with FTB he championed programs to help taxpayers pay the minimum amount of tax under the law and empowered taxpayers to capitalize on tax credits, state resources, and other benefits. He also advocated for and advanced poverty prevention policies, government accountability and transparency initiatives, and education and customer services programs.

Noteworthy was Horton’s leadership with the Volunteer Income Tax Assistance (VITA) Program to help working families, seniors, and the disabled recapture millions in state and federal refunds through the California and Federal Earned Income Tax Credit program; state employment opportunities; and legislative efforts to preserve the middle class. Horton’s legislative accomplishments also included authorship of criminal tax evasion laws; among them was AB 1418 that led to the BOE and FTB Top 500 tax delinquency lists. Since its enactment, the Top 500 list has resulted in $875 million in General Fund revenue collected. During Horton’s tenure on the Franchise Tax Board the agency excelled in customer service, technology improvements, and government efficiency and transparency measures with his guidance and support.

“I was deeply humbled and honored to be recognized by the Franchise Tax Board, and I commend executive officer Stanislaus for her strong and effective leadership in administering California’s franchise and income tax programs,” said Horton.