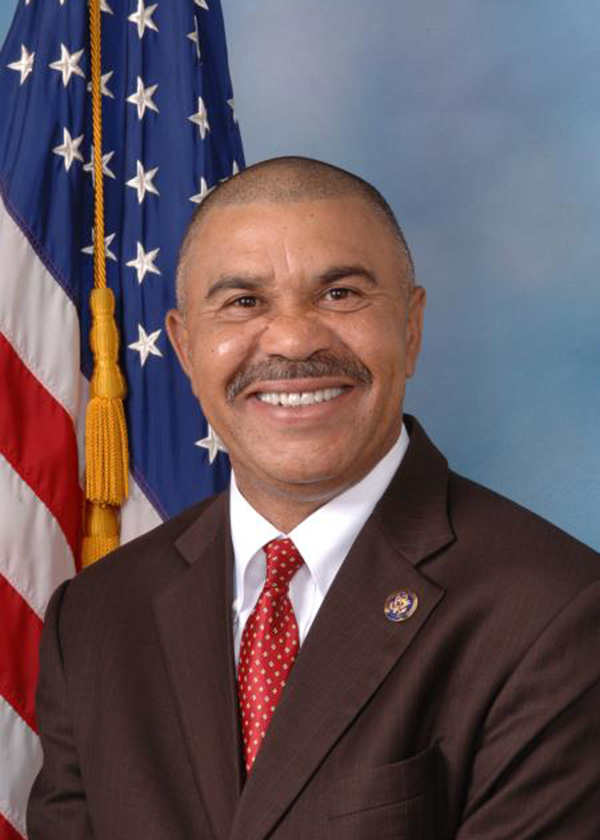 “The U.S. Capitol is a symbol of freedom, not censorship,” said Rep. Lacy Clay (D-Mo.) in a statement about the Pulphus’ artwork. “The young artist chose his own subject and the painting will not be removed.” (Lacy Clay/Wikimedia Commons)

On December 29, Fox News personality Eric Bolling spoke out against a painting by a high school artist and constituent of Rep. Lacy Clay (D-Mo.), who represents greater St. Louis and the city of Ferguson, Missouri.

“I’m saying to the three million people out there right now. Call your Congressman or call Lacy Clay’s office and say ‘get that picture down’ cops do not need to be depicted in this way. Blue Lives Matter,” Bolling told the audience on the Fox News show “The Five.”

The painting in question depicts a street scene that includes a protest march and animals in police uniforms. It also includes a depiction of a citizen facing a cop depicted as a horse-like figure pointing a gun at a citizen depicted as a wolf. The artwork is now hanging in a long hallway that connects the U.S. Capitol to the Cannon House Office Building where many members have offices.

The piece called “Untitled #1” was painted by David Pulphus, 18, and is amongst hundreds of other pieces of artwork by high school students as part of annual art competition by the student constituents of members of Congress across the country. The police killing of Michael Brown in August 2014 by a Ferguson Police Officer soon followed by the killings of Kajieme Powell and teenager Vonderrick Myers near St. Louis may have served as inspiration for the artist.

The day after Bolling’s pronouncement to remove the painting from the Capitol, Congressman Clay issued a statement, in part, to correct inaccurate information in several press reports that Rep. Clay selected the winning art. Members of Congress typically use a panel of judges that select the winning art in the popular annual contest and take no part in judging the artwork. 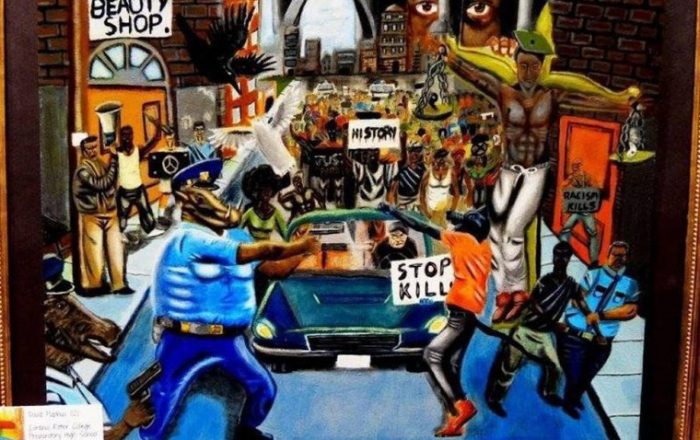 Fox News personality Eric Bolling encouraged his viewers demand the removal of David Pulphus’ artwork from the U.S. Capitol. At the time of the painting, Pulphus was an 18 year-old high school student. (David Pulphus)

“Members of Congress support student art competitions in our districts, but we do not select the young artists and we do not judge the artwork. I had no role in selecting the winner of this student art competition and I would never attempt to approve or disapprove artistic expression. The U.S. Capitol is a symbol of freedom, not censorship. The young artist chose his own subject and the painting will not be removed,” Rep. Clay said in a statement on December 30.

Joe Patterson, president of the St. Louis County Police Association, said that “we are not about censorship, but good art and good taste are sometimes not the same thing,” regarding the student’s work. The work by the high school students hangs each year for a little less than a year; new art is selected each summer.

The U.S. Capitol features several pieces of permanent, paintings and sculpture of figures from American history many may find objectionable. Several racists, segregationists and confederate figures are featured as statues, busts and in paintings in the U.S. Capitol building including Confederate “President” Jefferson Davis, and pro-slavery Presidents Andrew Jackson and John Calhoun.

A large portrait of the late Alabama Senator and segregationist James Eastland also hangs on the third floor of the U.S. Capitol above the Senate Chamber.

Democrats Search for the Next Obama