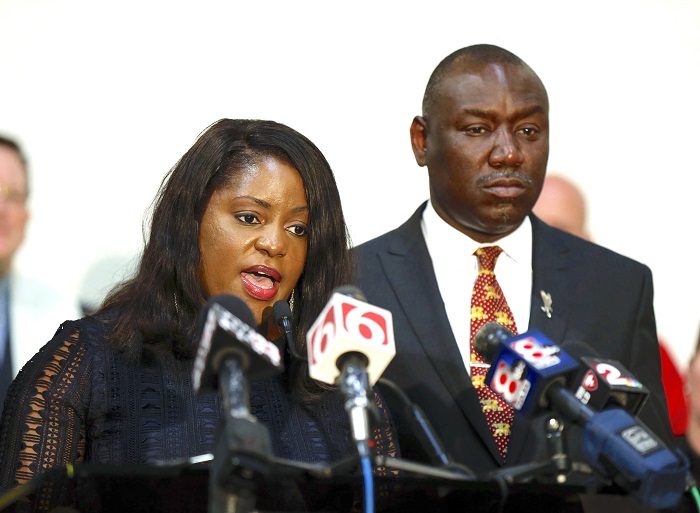 Tiffany Crutcher, sister of Terence Crutcher, and Benjamin Crump speak during a press conference in Tulsa, Okla., Thursday, May 18, 2017 after a Wednesday not guilty verdict in the manslaughter trial of Betty Shelby, a white Oklahoma police officer who fatally shot Terence Crutcher, an unarmed black man. Crutchers’ family has called on Tulsa city leadership to block Shelbyfrom returning to her job. (Stephen Pingry/Tulsa World via AP)

The family of an unarmed black man fatally shot by a white Oklahoma officer filed a wrongful death lawsuit in federal court Thursday against the city of Tulsa and the policewoman, who was acquitted of manslaughter charges last month.

The lawsuit filed on behalf of Terence Crutcher seeks at least $75,000 in damages and calls for widespread reform in the Tulsa police department, including mandatory training for police officers on managing suspects with mental health or substance abuse issues as well as mandatory activation of dash cameras during encounters.

The suit comes after jurors on May 17 acquitted Officer Betty Jo Shelby, 43, of manslaughter in Crutcher’s death. Two days after the acquittal, she was reinstated by Police Chief Chuck Jordan, although she won’t be allowed on street patrol while an internal affairs investigation continues.

Shelby’s attorney, Shannon McMurray, said she had reviewed the lawsuit and that it contains a number of factual errors and omissions.

“Just as in the criminal case, I can confidently say that Officer Shelby’s actions will be justified,” McMurray said.

Telephone calls seeking comment from the Tulsa Police Department were not immediately returned.

Shelby had been on unpaid leave since Sept. 22, when prosecutors charged her. Tulsa County District Attorney Steve Kunzweiler said Shelby had overreacted, arguing that Crutcher, 40, had his hands in the air and wasn’t combative _ part of which was confirmed by police video that showed him walking away from Shelby with his hands above his head.

Shelby had said she fired her weapon Sept. 16 out of fear because Crutcher ignored her commands to lie down and kept reaching into his pockets. Shelby said she fired the fatal shot when Crutcher appeared to reach inside his stalled SUV for what she thought was a gun. No weapon was found on Crutcher or in his vehicle.

Shelby’s swift return to the force prompted one minister to call it “a slap in the face.” About 100 protesters gathered outside the courthouse the night jurors returned the verdict, marched for several blocks and briefly blocked a street before peacefully dispersing about an hour later.

On the day of Shelby’s reinstatement, the foreman of the jury that acquitted her said in a public court filing that if Shelby had thought to use her stun gun before Crutcher reached his SUV, the decision “could have saved his life.”

“Many on the jury could never get comfortable with the concept of Betty Shelby being blameless for Mr. Crutcher’s death,” the foreman wrote. The jurors didn’t identify themselves in the memo filed in court.

Race relations have been troubled in Tulsa for more than a century. The city has yet to fully heal from a 1921 race riot that killed 300 black residents, injured thousands more and burned a thriving business district to the ground.

Last week, three Oklahoma law enforcement officers fatally shot a black man while trying to pick him up for a mental health issue. Authorities said Tulsa County sheriff’s deputies were attempting to pick up 29-year-old Joshua Barre near his house when the man walked away. Officers followed him for 10 blocks until he attempted to enter a nearby convenience store. They opened fire when they noticed he was carrying knives, though his family says the blades were pointed down.