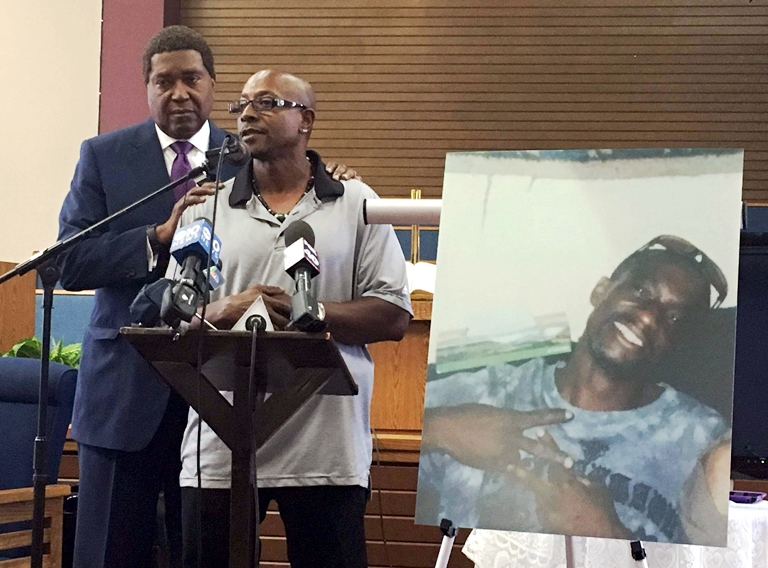 The family of a man killed in July by Sacramento police after 911 callers reported he was waving a knife and acting erratically demanded that two officers face murder charges after dash-cam video revealed they talked inside their police cruiser about running him down.

Joseph Mann, who was mentally unstable and homeless, dodged the cruiser twice and was shot 14 times less than a minute later by the two officers.

The officers “behaved like big game hunters closing in on an animal,” said John Burris, a lawyer for the Mann’s family said Monday.

The demand for the murder charges came as Los Angeles police chief Charlie Beck defended his officers in the fatal shootings of a black man Saturday who police say was armed with a loaded semi-automatic gun and a Hispanic man on Sunday who officers say was wielding replica handgun.

The latest police shootings happened amid heightened tensions over police actions involving black people and other minorities across the country, and followed two more fatal encounters between California police and black men last week in San Diego and Pasadena.

In the Sacramento case, police have said Mann was waving a knife in the air and doing karate moves in the streets just before police responded. But Burris told reporters he was not threatening anybody and that the two officers who shot him, John Tennis and Randy Lozoya, should face a U.S. Justice Department civil rights investigation in addition to murder charges.

The officers can be heard on the recording saying “I’m gonna hit him” and “OK, go for it” before appearing to drive their cruiser twice at Mann, who managed to scramble out of its way both times. The officers then stopped the cruiser, got out of it, pursued him on foot and opened fire.

“Mann was standing stationary on a sidewalk with no one in close proximity when the officers unloaded their guns,” Burris wrote in a letter to U.S. Attorney General Loretta Lynch.

Sacramento police spokesman Matthew McPhail said police are “encouraged to assess each circumstance and think critically about the tools at their disposal.”

McPhail and other police spokespeople did not immediately respond to a request to interview Tennis and Lozoya. Sacramento Police Officers Association President Timothy Davis did not respond to telephone and email messages seeking comment on behalf of the two officers.

Sacramento City Attorney James Sanchez declined to comment on whether police were aware of what Tennis and Lozoya said in the car. McPhail did not respond to messages asking the same question. 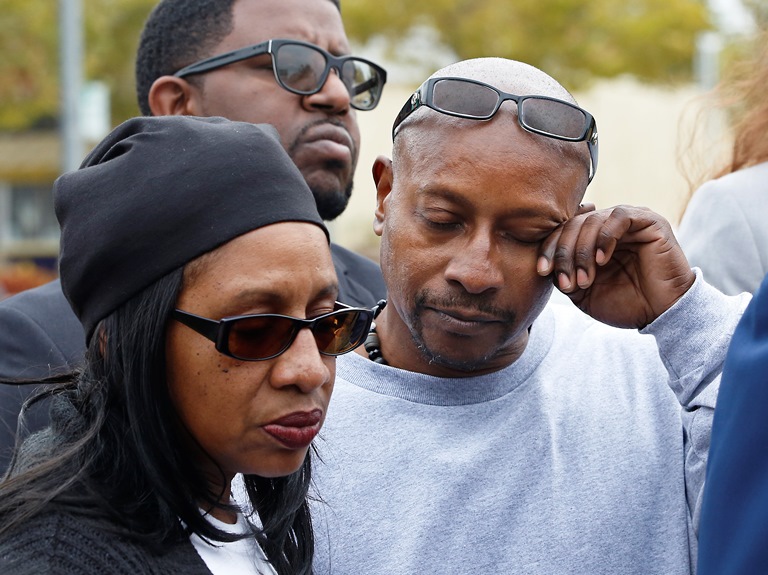 Robert Mann, right, the brother of Joseph Mann, who was killed by Sacramento Police in July, wipes his eye during a news conference Monday, Oct. 3, 2016, in Sacramento, Calif. The Mann family is demanding that the officers involved in shooting of Joseph Mann, 50, be charged with murder and that the U.S. Department of Justice open a civil rights investigation of the Sacramento Police Department. (AP Photo/Rich Pedroncelli)

Tennis and Lozoya were put on a brief leave after the July 11 shooting and returned to work on desk duty instead of patrol the following week. An administrative review of their actions is underway.

“It doesn’t service anybody’s interest with the public or the city, even the officers themselves or the family of the deceased, to have any sort of determination to be made before the investigation is complete,” McPhail said.

Surveillance videos show Mann doing the karate moves, zigzagging as he walked around a down-and-out commercial neighborhood in north Sacramento where many businesses are shuttered.

On police 911 recordings, callers said a man was waving a knife in the air, had a gun in his waistband and appeared to be mentally ill. Police found a knife but no gun after Mann was killed.

Family members have described Mann as a college graduate who loved politics and economics, and succeeded in several careers before deteriorating into mental illness about five years ago. They said he had been living on the streets and struggled with drugs before his death.

Toxicology tests revealed Mann had methamphetamine in his system the day he died, police said.

The videos released showed a first police cruiser that arrived alongside Mann as he was walking down a street. Mann turned away from that vehicle when another cruiser with the two officers approached him, talking inside their cruiser about hitting Mann.

When Mann ran out of the car’s way, the officer driving the cruiser backed it up and turned to aim in Mann’s direction again. It accelerated toward Mann, who ran across a median. The cruiser stopped and the officers got out.

Mann is heard on audio from the video saying he did not have a gun.