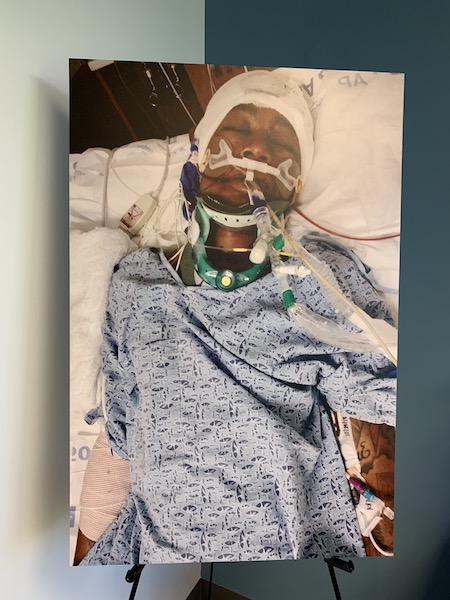 Photos of Alton Preston, Jr., comatose in a hospice after Oct. 28, 2018 beating by an off-duty LAPD officer. (Photos by Charlene Muhammad)

The family of a Black man left in a coma after an alleged race-based attack by an off-duty officer has filed a $195 million claim against the Los Angeles Police Department.

The husband and father of two has been in a coma since October 28, 2018 when Ricardo Dominguez severely beat him at the Hide-A-While Lounge in Rancho Cucamonga, Douglas told reporters during a February 6 press conference at his office in Ladera Heights.

“Witnesses have told this family that that same man took a sign from a nearby market, a sign about ‘play the Lotto,’ a heavy metal sign, and took that sign and smashed Alton on top of the head while he laid defenseless on the ground,” said Douglas, who was flanked by the 35-year-old’s wife Rahshana Preston, his family, and staff.

They were surrounded by photos of the young father lying comatose in his hospice bed, severely bruised with stitches, feeding tubes and a neck brace.  Douglas appealed for donations to a gofundme legal defense and medical expenses site (http://www.gofundme.com/legal-defense-and-medical-expense) established to help aid the wife and small children, who are suffering the devastating consequences of the primary breadwinner being in a coma for the last five months.

Rahshana Preston could barely speak as she approached the microphones.  She wept.  “My kids haven’t been able to see their father.  It’s been hard trying to stay strong for him, because they cry for him every night. They pray for him every night,” she told media.

“My son is three-years-old and every night, before he goes to sleep, he says ‘Jesus, heal my daddy and bring him home,” she whispered.

Rahshana Preston said she has spent every day at the hospital since the incident, so her husband wouldn’t be alone.  “It’s just hard.  I don’t understand why this had to happen to him,” she lamented.

“The pain is real! The injuries are severe! And I gave this family my pledge that we will seek justice, not only for Alton Preston, Jr., not only for Rashaha Preston, but also for Kiari and Amari who deserve to have their father back. With this statement, the struggle begins,” concluded Douglas.

According to Douglas, witnesses informed him that Dominguez tried to strike Preston, Jr. a second time but a witness intervened.  He detailed that a fight broke out inside the lounge after four White males started hurling racial slurs at some Black men, but said he did not know if Dominguez had hurled any slurs.  The fight spilled outside, where Preston, Jr. was talking on the phone.

He tried to break up the fight, and was threatened with violence, then intentionally punched, hit, and struck over the head with a bottle and a sign. Other off-duty officers threatened to physically harm the 35-year-old who played the role of a Good Samaritan as well, Douglas went on.

“If you knew him, it would be the role that you would expect him to play, because Alton is a caring man.  He would help a homeless man on the street if he could, and he does,” said Douglas.

According to Douglas, Dominguez has had a sordid history of off-duty interactions, including sustained allegations of domestic violence and an untoward violent incident involving alcohol.

“It is frightening to understand that an off-duty Los Angeles Police officer was engaged in a fight at a bar, who has a history of suspensions from conduct off-duty at bars involving alcohol,” he remarked.  “He is a liability for all Angelenos, because I’m informed he is still employed by the Los Angeles Police Department even today,” Douglas argued. 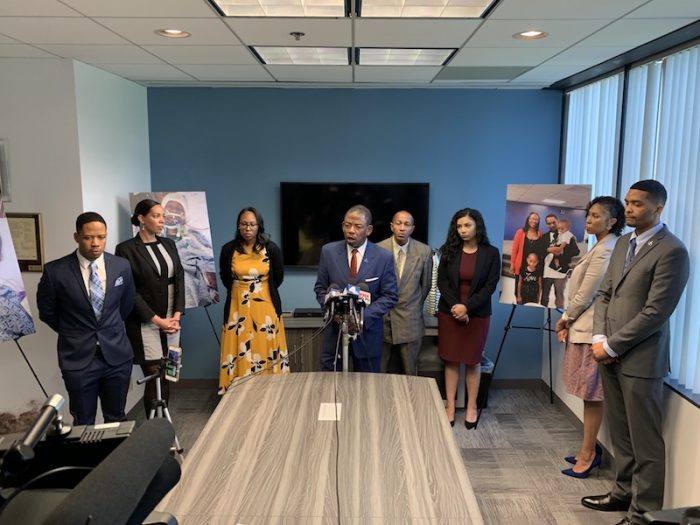 He also made it clear that the case may not likely be tried for that amount, but said the number was formulated because it reflects the seriousness of the case.

At least one other person involved in the fight was an LAPD officer, according to Douglas.  He said told the Sentinel that they perhaps were not on duty at the time, but, police officers are on duty 24/7, reflected by the fact that Dominguez admitted he was carrying his department-issued handgun on him that day, and the fact that he removed his handgun and contemplated using it in his estimation because he was combatting crime.

“That should strike terror in all Angelenos.  These men were in a bar drinking and racial slurs were hurled at four Black patrons, which led to a fight and a vicious attack on Preston, Jr.

Douglas held the press conference in part to expose Dominguez and challenge the LAPD on why he’s still employed and on the streets, risking other citizens.

Officer Norma Eisenman told the Sentinel in an email that the LAPD does not make any comments on pending lawsuits.

At a preliminary hearing on February 4 in the trial of Alton’s brother, Ryan, Dominguez allegedly testified that he was unaware of who caused Preston, Jr.’s injuries.

Ryan Preston was in the bar but not involved in the fight, said Douglas.  However, he is being tried for felony evasion and striking Dominguez.  As Ryan Preston whisked his unconscious brother to a nearby hospital, he was followed by a Rancho Cucamonga Sheriffs Deputy as well as Upland Police.