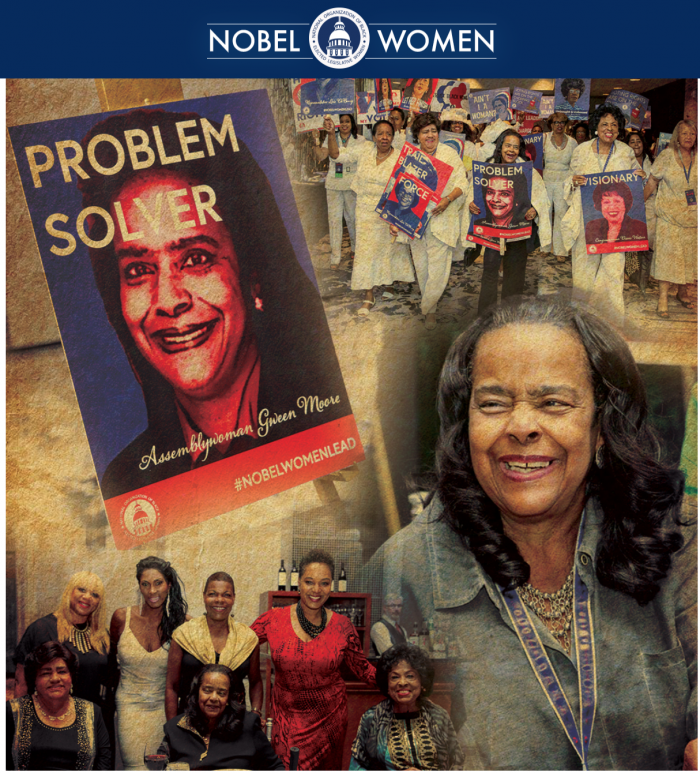 A private homegoing celebration for the Hon. Gwen Moore is scheduled for 10 a.m., Wednesday, Sept. 9, at Angelus Funeral Home in Los Angeles, her family has announced.

Immediately following the funeral service, the internment, open to the public, will take place at Inglewood Park Cemetery in Inglewood.  Moore, 79, who passed away on Aug. 19, served as a California lawmaker from 1978 to 1994.

“Assemblymember Moore was an icon of the legislature,” said Assemblymember Sydney Kamlager (D-Los Angeles). “She was a powerful advocate, dedicated public servant, and exceptional leader. Knowing her was an honor.”

Moore’s colleagues praise her for introducing and rallying support for a number of groundbreaking California laws that made an impact way beyond the borders of the state. Some of them inspired similar legislation across the country.  Moore was responsible for writing over 400 bills that were signed into law while she was a member of the California legislature.

One initiative she spearheaded that stands out — particularly among Black and other minority business owners — is General Order 156, commonly called “G-O 156.” It was enacted by the California Public Utilities Commission (CPUC) in 1988.  The rule requires state utilities to extend outreach efforts to diverse businesses, providing them contracting opportunities.

By standing up that state supplier diversity program and requiring its enforcement, Moore ensured that utility outlets across the state kept track of how many contracts they awarded to companies owned by people of color, women, and service-disabled veterans. Black-owned businesses were finally able to secure lucrative state contracts.

Every fall after that, the outlets have had to report their contracting information to the CPUC in writing, and in person before the full commission.

Carolyn Veal-Hunter, now a top lobbyist in the state and has worked as a governmental affairs consultant for many Fortune 500 companies, shared her thoughts about working with Moore professionally and personally.

“I had the opportunity to work with Gwen Moore as a principal consultant to the utilities and commerce committee during the implementation of GO 156,” said Veal-Hunter. “Gwen trained me to be one of the best consultants in the building at that time and trusted me to help implement her vision. Ms. Moore is responsible for countless number of women and minority employees who climbed the ranks within the utilities as well as several in the lobbying and consulting world.”

Moore’s advocacy led to the lifting of financial burdens and the opening of doors for African Americans in many arenas across the state.  She focused her efforts on bills related to parental and family leave, adoption, private club discrimination, public utilities, telecommunications, and transportation.

“Among her many accomplishments, she was a professor, an expert on policy issues, including utilities and telecommunications, and the founder of her own company,” U.S. Congresswoman Barbara Lee (D-CA-13) said of Moore after her passing. “Her work made California a better place and helped countless people.”

During the virtual “2020 Salute to Black Women Empowerment Summit,” hosted by the Black Business Association on Aug. 26, the group shared a video of Moore offering some advice while reminiscing about her experiences in the California legislature.

“In moving your agenda, you had to have a certain amount of power. And when leadership begins to develop, you develop your expertise and people will respect you for what you know. Knowledge can give you the control that you need. That’s how you make a difference. Learn your issues. Become known as someone who’s knowledgeable,” Moore said.

On Aug. 20, after learning about Moore’s passing, Sen. Holly J. Mitchell (D – Los Angeles) referred to Moore as a “powerhouse” on Twitter.

“She opened the door for the next generation of Black female politicians in CA, including myself. This is an immeasurable loss. I’m filled with sorrow,” tweeted Mitchell, who chairs the Senate Committee on Budget and Fiscal Review.

Moore’s rise to political fame started with humble beginnings in Los Angeles. Born Oct. 28, 1940, she graduated from California State University Los Angeles, and then received a teaching certificate from the University of California Los Angeles (UCLA).

Later, Moore served as a Los Angeles County deputy probation officer, an administrator with the federally funded Manpower and Development Training Program, and director of public affairs for the Los Angeles Community Action Agency, according to the California State Archives.

In 1975, Moore started her political career after being elected to the board of the Los Angeles Community College District. In 1978, she successfully ran for the California Assembly in the 49th district (it later became the 47th district after redistricting), representing parts of southwest Los Angeles.

“When I received the news of the Honorable Gwen Moore’s passing, I was devastated,” said Karen Camper, President of the National Association of Black Elected Legislative (NOBEL) Women.  “She was also a woman who modeled what it means to be a Black woman dedicated to public service. Gwen Moore, along with the other phenomenal founders of NOBEL Women, had the foresight and vision to know the importance of creating spaces for our leadership. I will always remember her enthusiasm and her willingness to serve.”

In the legislature, Moore was a passionate advocate for family and children. She introduced eight major bills that extended unpaid family and parental leave for California workers up to four months.

In 1994, Moore resigned from the California State Assembly to run for Secretary of State. Although she didn’t win that race, Moore began to pursue other opportunities outside of elected office that influenced state policy and impacted the lives of people.

Sen. Steven Bradford (D – Gardena) tweeted that Moore was a “guiding star” after the Senate adjourned on Aug. 24. Bradford, who represents the 35th Senate District, was the chairperson for the Assembly Utilities and Commerce committee, a seat Moore once held as a lawmaker.

“She was a friend and mentor. I appreciate all she shared with me as an elected official and chair of U&C,” the Senator said, expressing gratitude to Moore for blazing a political path for him and others.