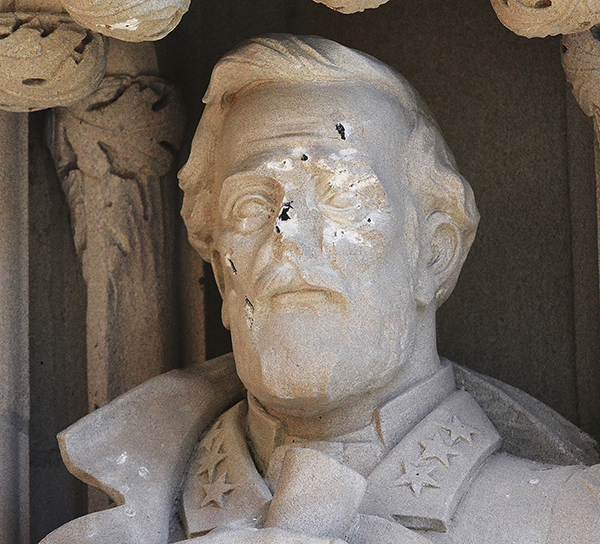 FILE – In this Aug. 17, 2017 file photo, the defaced Gen. Robert E. Lee statue stands at the Duke Chapel on Thursday, Aug. 17 2017, in Durham, N.C. Duke University removed a statue of Gen. Robert E. Lee early Saturday, Aug. 19, days after it was vandalized amid a national debate about monuments to the Confederacy. The university said it removed the carved limestone likeness early Saturday morning from Duke Chapel where it stood among 10 historical figures depicted in the entryway (Bernard Thomas/The Herald-Sun via AP)

Duke University removed a statue of Gen. Robert E. Lee early Saturday after it was vandalized amid a national debate about monuments to the Confederacy.

The university said it removed the carved limestone likeness before dawn from the entryway to Duke Chapel, where it stood among 10 historical figures. Officials discovered early Thursday that the statue’s face had been gouged and scarred and that part of the nose is missing.

Another statue of Lee, the top Confederate general during the Civil War, was the focus of the violent protest in Charlottesville, Virginia, that turned deadly a week ago.

Duke University president Vincent Price said in a letter to the campus community that he consulted with faculty, staff, students and alumni before deciding to remove the statue.

“I took this course of action to protect Duke Chapel, to ensure the vital safety of students and community members who worship there, and above all to express the deep and abiding values of our university,” Price said in the letter.

Durham has been a focal point in the debate over Confederate statues after protesters tore down a bronze Confederate soldier in front of a government building downtown on Monday. Eight people face charges including rioting and damaging property. Days later, hundreds marched through Durham in a largely peaceful demonstration against racism before an impromptu rally at the stone pedestal where the statue stood.

Other monuments around North Carolina also have been vandalized since the Charlottesville protest, and calls are growing to take down a Confederate soldier statue from the campus of the University of North Carolina in Chapel Hill.

Gov. Roy Cooper has urged the removal of Confederate monuments from public property around the state, though his goal would be difficult to achieve because of a 2015 state law prohibits their removal. Duke is a private university and outside the scope of that law.

The Lee statue had stood for about 85 years between two other historical figures of the American South, Thomas Jefferson and poet Sidney Lanier, along the main entryway to the neo-Gothic church at the center of Duke’s campus. It was moved into storage at 3 a.m. Saturday and its future is undetermined, university spokesman Michael Schoenfeld told the Herald-Sun of Durham.

“We want people to learn from it and study it and the ideas it represents. What happens to it and where it will be is a question for further deliberation,” Schoenfeld said. The decision was supported by the university’s trustees, Schoenfeld said.

Duke has been affiliated since its founding with the United Methodist Church. Luke Powery, dean of Duke Chapel, said Saturday he sees the empty space formerly occupied by the Lee statue as creating a new opportunity to heal the ongoing racism problems confronting the country.

The gap “in many ways represents a hole in the heart of the United States and the ongoing struggles of racism, hatred and bigotry – all the things we’re seeing in our streets. We haven’t come as far as perhaps we thought we had come as a nation,” Powery said.