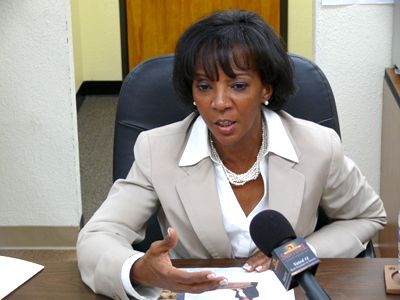 Los Angeles County District Attorney Jackie Lacey announced this week that a Los Angeles police officer has been charged with an on-duty assault of a 28-year-old man in April.

“This is a disturbing case of the illegal use of force at the hands of a police officer,” District Attorney Lacey said. “In this case, we believe the force was neither legally necessary nor reasonable.”

Frank Hernandez (dob 5/8/71) was charged in case BA487734 with one felony count of assault under color of authority. Arraignment is scheduled for Thursday in Department 30 of the Foltz Criminal Justice Center.

The case was filed for warrant on June 8.

On April 27, Hernandez and his partner responded to a call of a trespasser in a vacant lot in Boyle Heights. During a confrontation between police and the victim, Hernandez is accused of illegally punching the unarmed man more than a dozen times in the head, neck and body.

District Attorney representatives worked closely with LAPD detectives who investigated the matter. The case was presented to the District Attorney’s Office for filing consideration on June 2.

If convicted, the defendant faces a possible maximum sentence of three years in county jail.

The case is being prosecuted by deputy district attorneys assigned to the office’s Justice System Integrity Division, which prosecutes crimes committed by law enforcement officers, judges, attorneys and other members of the justice system.

District Attorney Lacey also announced this week that she will not file charges against any protester for a curfew violation or failure to disperse.

She directed her legal staff to decline to prosecute these cases in the interest of justice.

“I believe whole-heartedly in free speech and support the right of protesters to demonstrate peacefully against historic racial injustice in our criminal justice system and throughout our nation,” District Attorney Lacey said. “I want to encourage the exchange of ideas and work to establish dialogue between law enforcement and protesters so that we may implement enduring systemic change.”

The District Attorney’s Office prosecutes all felonies in Los Angeles County and misdemeanors that occur in the unincorporated areas of the county and in most cities.