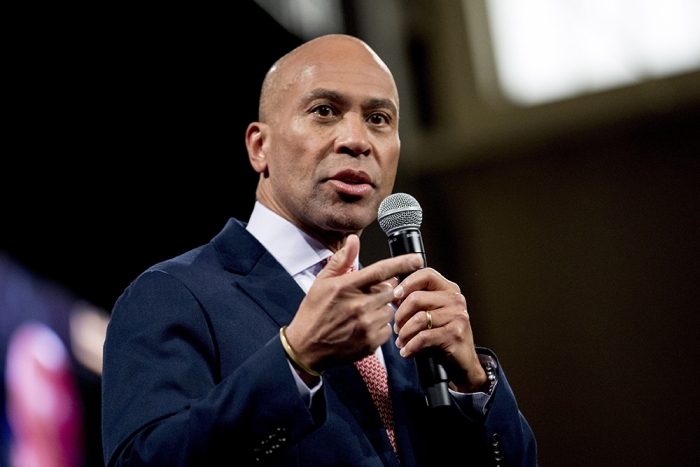 FILE – In this Feb. 8, 2020 file photo, Democratic presidential candidate former Massachusetts Gov. Deval Patrick speaks at “Our Rights, Our Courts” forum New Hampshire Technical Institute’s Concord Community College, in Concord, N.H. Patrick has ended his campaign for president after his late bid failed to gain traction in the race. Patrick was the last remaining African American candidate in a Democratic presidential field once defined by its diversity.(AP Photo/Andrew Harnik)

Former Massachusetts Gov. Deval Patrick, the last remaining African American candidate in a Democratic presidential field once defined by its diversity, ended his 2020 campaign Wednesday after his late bid failed to catch fire or resonate with voters.

“The vote in New Hampshire last night was not enough for us to create the practical win at the campaign’s back to go on to the next round of voting.`` Patrick said in a statement.

Patrick came in second-to-last in New Hampshire on Tuesday with just over 1,200 votes, after ignoring Iowa and focusing most of his time and resources on the first primary. His decision leaves just one other candidate of color, Hawaii Rep. Tulsi Gabbard, a Samoan American, in the Democratic contest. It brings the number of Democrats in the presidential primary race to eight.

Patrick launched his bid for president in mid-November but failed to register in polling and fundraising and never made it onto a presidential debate stage. Patrick raised just $2.2 million in the final six weeks of last year, and while a super PAC created to support his bid committed nearly that much to advertising in the early primary states last month, Patrick still barely registered in New Hampshire. He blamed in part what he characterized as a media narrative created around his late entry in the race. “I’ve met many people on the campaign trail who lament how they wished I had entered the race sooner,`` he said in a statement.

It’s a disappointing finish for someone who, in part because of his rhetorical skills, has long drawn comparisons to former President Barack Obama. The two men are personally close and Patrick counts some of Obama’s aides and donors as part of his own inner circle. Valerie Jarrett, one of Obama’s closest advisers, was one of Patrick’s most prominent supporters.

But Obama has largely avoided wading into the race, and Patrick said throughout the primary that he didn’t expect the former president to provide a boost to his bid.

Patrick hoped that by focusing on New Hampshire, the familiarity of a neighboring state would help boost his chances in the race. He offered what aides felt was a unique message in a field that ultimately boiled down largely to career politicians with little executive or private sector experience: that he had the track record as governor and through years of business experience to deliver on Democratic priorities like fighting climate change and reforming health care.

On the campaign trail, Patrick made a case for compassionate capitalism, the idea that businesses and government can work together in service of public good, and he drew on his time working for Bain Capital developing businesses that promote positive social change as evidence. While some donors and moderate Democrats said both his message and the messenger were sorely needed, in a primary season dominated by progressives’ calls to break up big corporations and expand government aid programs, Patrick’s arguments seemed to fall flat with some voters.

But in his Wednesday announcement, Patrick said that he heard from many voters on the trail who appreciated his moderation, and he warned the remaining candidates to avoid getting too bogged down in political divisions.

“Patriotism demands, now more than ever, that we reject false choices. Despite our righteous anger, Democrats don’t have to hate Republicans to be good Democrats. … In that same spirit, we don’t have to hate moderation to be a good progressive,`` he said.