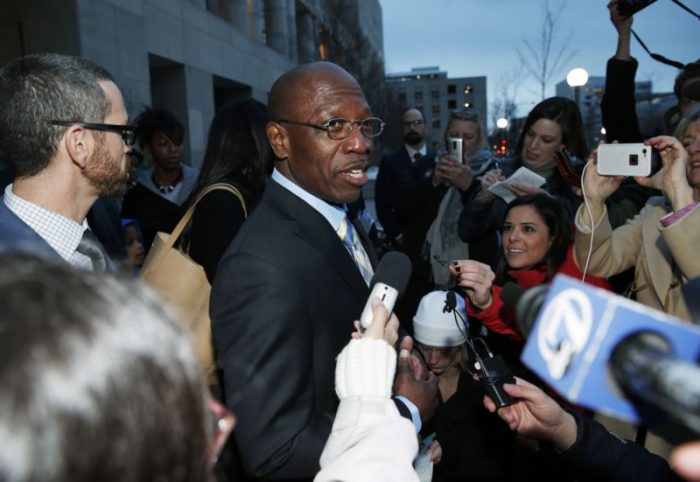 In this Dec. 22, 2015, file photo, Clarence Moses-EL, center, talks after being released from Denver County jail in Denver. Moses-EL, released from prison last year after spending more than a quarter of a century in prison for a rape he long denied committing, was acquitted of the crime on Monday, Nov. 14, 2016, leaving a courtroom to applause from supporters and chants of “it’s over.” (AP Photo/David Zalubowski, File)

A Denver man who spent more than a quarter of a century in prison for a rape he long denied committing was acquitted of the crime on Monday, leaving a courtroom to applause from supporters and chants of “it’s over.”

Clarence Moses-EL, 60, was freed in December, after a judge overturned his 1988 conviction on rape and assault charges and found that he would likely be acquitted if his case went to trial again.

Another prisoner claimed to be responsible for the attack, but prosecutors chose to try Moses-EL again. Jurors began deliberating the case last Thursday, and they issued their not guilty verdict Monday — leaving Moses-EL beaming and fighting back tears.

Outside court, Moses-EL said he holds no grudges and hoped his case will help improve the criminal justice system. Right now, he said, he wants to enjoy his freedom.

Moses-EL had long maintained his innocence. Several of his efforts to appeal his conviction were unsuccessful, and the legal and political systems repeatedly failed him in his decades-long attempt to win his freedom.

“All I ever wanted from the very beginning was for the truth to come out,” he told reporters, surrounded by his wife and children. “This moment here is the moment I’ve fought for for a long time.”

The victim in the case, a neighbor, initially named three other men as possible attackers, including the inmate, L.C. Jackson, who confessed in 2013. But she accused Moses-EL, saying his face appeared to her in a dream, and a jury convicted him largely based on her testimony.

He won a legal bid for DNA testing on the evidence to clear his name, but Denver police threw it away a month later, saying they did not receive any notice from prosecutors to hold on to it.

In 2008, then-Colorado Governor Bill Ritter, a former Denver prosecutor, objected to legislation that would have given Moses-EL a new trial, even though lawmakers strongly supported it.

Moses-EL’s break came when Jackson wrote to Moses-EL in 2013 saying he had sex with the woman that night. Jackson, who is imprisoned for two other rapes, has not been charged in this case, and prosecutors said Monday he is not a suspect.

Prosecutors challenged the credibility of Jackson’s confession and stood by the victim.

“She is very disappointed” with the verdict, Chief Deputy District Attorney Bonnie Benedetti said. “She has maintained for years that she saw and recognized the person who attacked her, and she stands by that.”

Prosecutors chose to pursue the second trial because the victim wanted to proceed with the case, Benedetti said.

Despite being free for nearly a year, Moses-EL said he is still struggling to break habits he formed in prison. He can’t bring himself to walk barefoot inside his home, for example, something he never did while behind bars.

“I had become psychologically programmed to exist inside the system itself,” he said. “I have to deprogram myself and reprogram myself.”