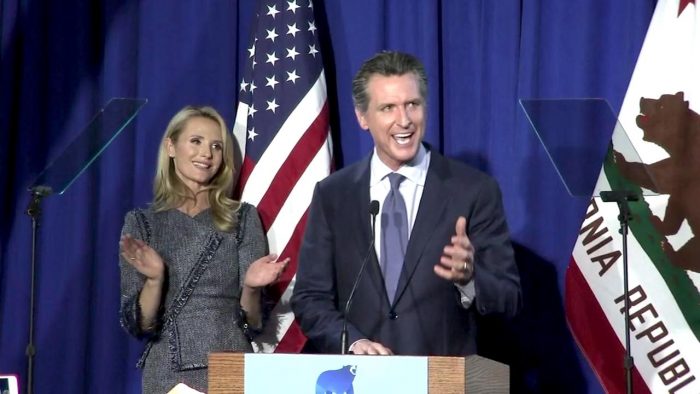 Leutinant Governor Gavin Newsom came out the front runner this week in the primary race for California’s next governor and Republican John Cox followed close behind, sending both to the general election in November. Newsom is a Democrat, who formerly served as San Francisco’s mayor and Cox is a Republican business executive endorsed by Trump. Former Los Angeles Mayor Antonio Villaraigosa, also a Democrat, pulled in fourth behind Republican Travis Allen and won’t be heading to the general election.

“To me, ‘Courage for a Change’ is more than a campaign slogan.  It has always been — and will always be — California’s truest calling,” Newsom tweeted Tuesday night.

“Thanks to you, tonight we are one step closer to achieving it. Thank you, California. Now, on to November!”

“California is the fifth largest economy in the world, and continues to show the world that an economy can thrive when it protects workers’ rights, environmental protections, civil rights, and vulnerable communities,” Newsom said via his campaign page.

Newsom started his political career under former San Francisco Mayor Willie Brown, as a volunteer in his campaign. He was appointed to the San Francisco Board of Supervisors in the late 90s replacing Kevin Shelly and was subsequently voted into a four year term in 1998. He served as San Francisco’s mayor from 2004 to 2011.

One of his most notable legacies there was the Care Not Cash initiative, which provided 5,000 homeless people with permanent shelter in the city. Other programs initiated by Newsom to end chronic homelessness include the San Francisco Homeless Outreach Team (SF HOT), and Project Homeless Connect (PHC). He was also known for rebelling against state laws against same sex marriage licenses, when he directed city/county clerks to issue to such couples.

For his part, Cox said he wants to “take back California” through immigration and tax reform, he said.

“Once the land of promise and opportunity, California today is on the brink of financial insolvency, thanks to the failed policies of the Jerry Brown Liberal Democrats,” Cox wrote on his campaign website.

“We should begin by repealing Jerry Brown’s massive $52 billion gas tax increase and ending the ‘Sanctuary State’. Next, we need to unshackle the productive capacity of California’s vast economic engines.  The only possible way to rescue California from a likely financial melt-down is to unleash small business, roll back oppressive regulations and focus on economic growth.

“I’m a businessman, not a politician. I have a 35 year conservative record and have an economic plan that will make California affordable again for middle class families…”

Cox cut his political teeth in a run for Congress to represent Illinois’ 10th District in 2000. He ran for U.S. Senate in 2002. He became a full time resident of California in 2007. President Donald Trump said, “California finally deserves a great Governor, one who understands borders, crime and lowering taxes,” in his endorsement of Cox.

“[Cox is] a really good and highly competent man.”

Meanwhile, Villaraigosa called for Los Angeles County to keep its polls open until Friday, because of a printing glitch that knocked more than 100,000 voters off of rosters.

“We’re not saying anything nefarious happened… but when you’re a leader, you say, ‘We’ve got to have answers,'” he said Tuesday night.

According to news reports, Villaraigosa is relying heavily on support from Los Angeles County, and the glitch could lead to a delay in tallying many votes in his favor. His campaign has also expressed concerns that some voters whose names weren’t on the roster may have left without voting at all.