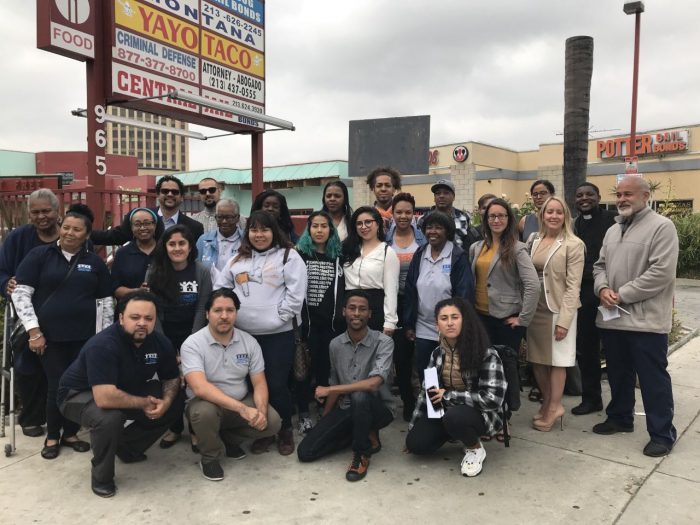 Los Angeles Councilmember Marqueece Harris-Dawson joined Community Coalition, Californians United for Responsible Budget, and other community groups to urge state and local officials to end cash bail and replace the current system with one that prioritizes public safety and restores justice to the pretrial process.

The current broken system essentially criminalizes poverty. It keeps people, including a disproportionate number of Latinx and African-Americans, detained in jail prior to trial simply because they cannot afford bail, while wealthy defendants can buy their freedom with ease.

“Los Angeles operates the largest jail system in the United States. The cost of incarceration are more than fiscal, and disproportionately impacts Black, Latinx, women, poor and working communities in our neighborhood” said Kelly Lytle-Hernández, professor of African-American studies at UCLA. “Now is the time to pass bail reform, and provide robust funding to ensure successful implementation.”

“For far too long, Black and Latino communities faced a fundamentally unfair bail system that was supposed to provide equal treatment under the law,” said Councilmember Marqueece Harris-Dawson. “Now, we have the opportunity to make good on that promise and ensure that every person is offered an equitable opportunity in our justice system while keeping families and communities intact.”

“The current bail system prioritizes the freedom of wealthy defendants by perpetuating race and economic disparities” says Alberto Retana, President & CEO of Community Coalition. “it burdens people of color and unjustly keeps them from their families.”

Ivette Alé, Statewide Co-Coordinator for Californians United for a Responsible Budget warns that, “while a wave of bail reform is sweeping the country, Los Angeles must remain vigilant of the so-called ‘reforms’ being pushed to replace money bail. Replicating systems of racial inequality through the use of bias algorithm based risk assessment instruments and using technology to increase the surveillance of Black and Latinx communities through the use of electronic shackles will only serve to expand the reach of incarceration. What Los Angeles needs is a transformation of our pre-trial system that focuses on meeting the needs of our community.”