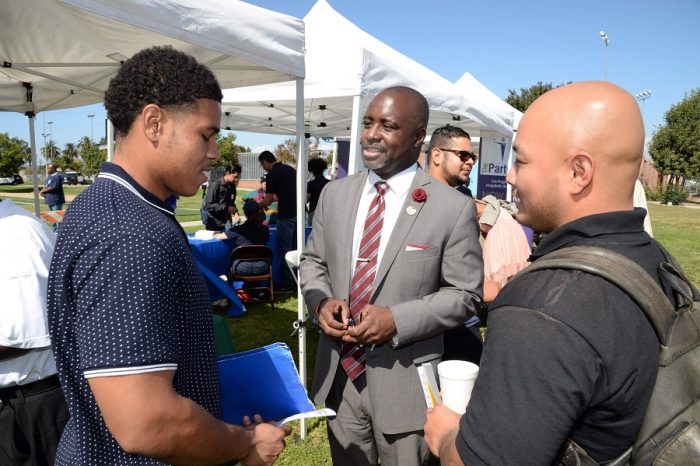 Councilmember Harris-Dawson meets with two job seekers at the Harvard Park Job Fair. (Courtesy of the city of Los Angeles)

On Friday, October 12, Councilmember Marqueece Harris-Dawson hosted the Harvard Park Job Fair, his third annual job fair, bringing 1,000 job openings to South Los Angeles. During the event, hundreds of residents who attended had access to 40 employers and several were offered jobs on the spot. South L.A. communities have some of the highest unemployment and underemployment rates in the city.

“Bringing jobs to South L.A. is my top priority, and I proud of the amazing turnout from residents and businesses,” said Councilmember Marqueece Harris-Dawson. “We know that a quality job can change a person, a family, and a whole community. I want to create as many opportunities for residents to change their lives.” 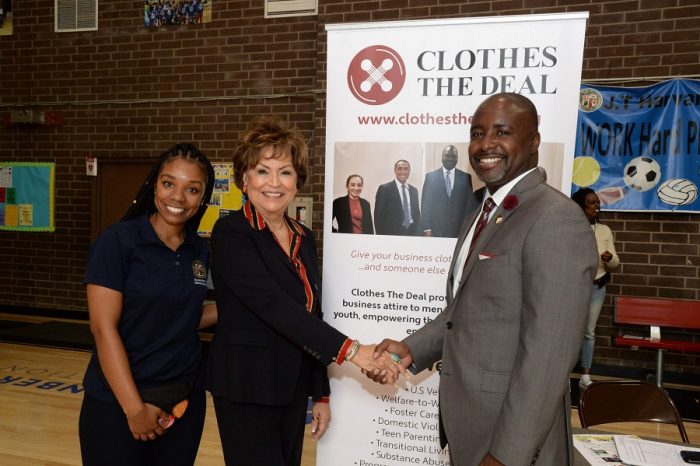 This job fair was also a key project of the Community Safety Partnership at Harvard Park, an initiative launched by the Councilmember in 2016. The project dedicates 10 additional LAPD officers to carry out relationship-based policing in an area that has seen high crime over the past several years. In its first year, the program eliminated homicides and reduced violent crime by nearly 25%. A survey of Harvard Park residents indicated that the lack of jobs was a top priority, after gun violence. The Harvard Park Job Fair was hosted in the middle of the community and targeted outreach ensured that residents throughout the neighborhood had access to the programming.

Sponsors included the Los Angeles Area Chamber of Commerce, PCL Construction, and the Los Angeles Workforce Development Board. The event also provided supportive services such as interview and resume assistance, record expungement, and reduced cost California Identification Cards. The non-profit Clothes the Deal also provided free professional clothing to residents who were in need. Employers from several industries ensure that residents had a variety of choices. They included construction, hospitality, transportation, security, and public sector jobs.