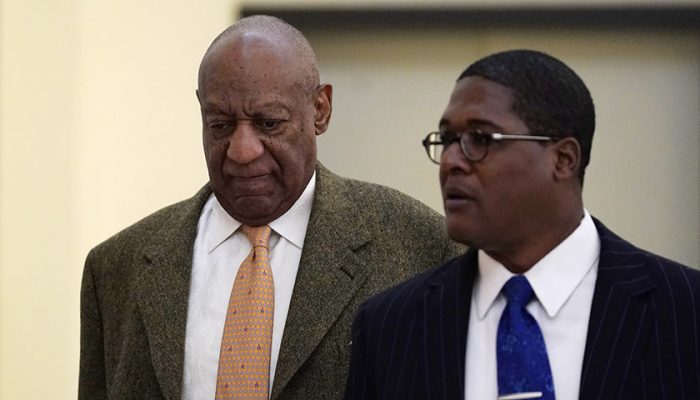 Jurors in the Bill Cosby sexual assault trial in Norristown, Pa. talked about shopping a book deal based on their experiences with the case. (POOL PHOTO)

Before they convicted Bill Cosby on three counts of aggravated indecent assault last month, some of the jurors were already plotting on how they could cash in on the case.

People familiar with three of the jurors on the case said they had a book deal on their minds, long before evidence was presented in the courtroom.

“The 80-year-old comedian faces up to 10 years in prison on each count, but Cosby is likely to serve them concurrently,” CNN.com reported. “A sentencing hearing with Judge Steven O’Neill has not yet been scheduled, and Cosby remains out on bail.”

Juror No. 11 and juror No. 12, two White males, “specifically talked about how much they could make after they send that old man to prison,” said a Norristown resident, who goes by the nickname, “Deacon Stone.” Stone declined to provide his given name, because he said he feared for his safety, but he was visibly present throughout the trial.

According to Stone, another juror was told, “Dude, do the right thing, get that book deal,” by a close family member.

Asked how he came across the information, Stone and another man, who didn’t want to give his name, said they are “closer than cousins” to one of the jurors.

During the trial, juror No. 12 appeared to talk to Montgomery County District Attorney Kevin Steele’s spokeswoman Kate Delano in a flirtatious manner. At least three individuals regularly complained of the juror raising his eyebrows and winking at Delano, who may have not been aware of the juror’s actions. Juror No.12 was also observed smiling “almost uncontrollable” at attorney Lisa Bloom, who’s client Janice Dickerson testified against Cosby.

“If jurors in the Cosby trial were motivated by the possibility of getting a book deal, then they would have had incentive to find him guilty, guilty, guilty—just like they did,” said famed forensic psychiatrist and expert witness, Carole Lieberman. “Finding him ‘guilty’ made it a landmark victory of sorts, because of the #MeToo [movement] and because it brought down a once-powerful celebrity. If they had found him ‘not guilty,’ there wouldn’t be much of a story there, so people wouldn’t be as interested in reading about it in a book.”

Eleven of the 12 jurors have already joined to hire a publicist.

Juror No. 1, who was observed sleeping throughout the trial, appeared alone on ABC’s Good Morning America after the verdict and said Cosby’s 2006 deposition hurt the comedian.

However, former Montgomery County District Attorney Bruce Castor made a deal with Cosby in which Castor agreed that if the comedian sat for the deposition, his words could never be used against him in any current or future criminal prosecution.

“A judge with an enormous potential bias did not disclose that possible bias to the lawyers to give them the option to seek a new judge,” Castor said.

In explaining why he made the deal with Cosby, Castor said: “I thought making Mr. Cosby pay money was the best I was going to be able to set the stage for. I was hopeful that I had made Andrea Constand a millionaire.”

Constand did reach an out-of-court civil settlement with Cosby worth $3.4 million.

Castor reiterated that he granted Cosby immunity from prosecution and that future prosecutors were bound to honor that deal.

“A sitting prosecutor spent $1 million proving Cosby is guilty in campaign ads, before charges were ever brought,” Castor said. “That’s in direct contravention of written ethics rules which says prosecutors cannot do that. What is happening to Cosby, as bad a man as he undoubtedly is, should never happen to anyone in America. I’m 36 years in the justice system, much of it at a pretty high level and I’m disgusted that any citizen entitled to the presumption of innocence has been treated this way.”

Castor continued: “I didn’t say anything, because it is up to the judge and the lawyers to police their own conduct. I kept waiting for someone to ask me, but it never happened.”

Matt Pinsker, a former prosecutor and magistrate who is now a criminal defense attorney and adjunct professor of criminal justice at Virginia Commonwealth University, said he was appalled when he heard about the jurors in the Cosby case.

“It’s completely inappropriate for jurors to be planning a book deal, and it could result in a mistrial,” Pinsker said. “Jurors should be focused on doing justice, and not profiting from their public service. A prospective book deal is legally and morally problematic because it gives jurors a profit incentive.”

Kimberly Bathgate, a spokeswoman for the Montgomery County Court, said the judge and district attorney would have no comment.

Cosby’s spokesman Andrew Wyatt could not immediately be reached for comment.

In April, Cosby, 80, was found guilty on three counts of aggravated sexual assault stemming from a 2003 or 2004 incident involving Andrea Constand at his Elkins Park home.

He’s scheduled to be sentenced later this summer and faces up to 30 years in prison.

Ryan Babcock, a trial lawyer who owns a firm in Brunswick, Ga., said juror misconduct can be a serious problem at trial, particularly with technological advances made in the last decade.

“The parties are entitled to jurors who don’t have their minds made up about a verdict before the trial starts, and jurors who are not influenced by third parties outside of the courtroom trial,” Babcock said. “That can be especially challenging in a high-profile case like Bill Cosby’s. The comment about [the book deal] alone would not amount to juror misconduct. In any event, juror misconduct could result in a new trial or reversal on appeal, but should not impact the sentence itself.”