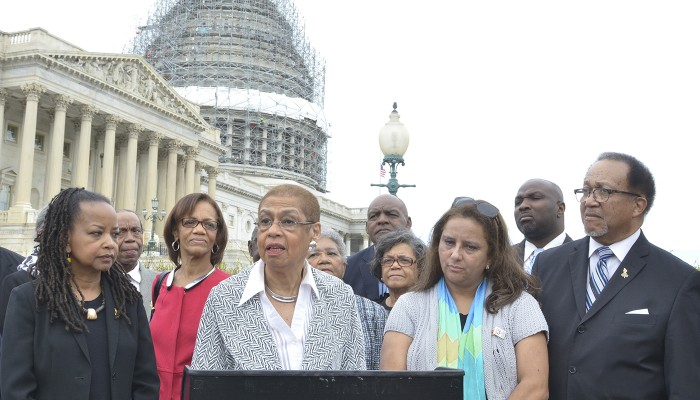 Washington, D.C. Congresswoman Eleanor Holmes Norton speaks outside of the U.S. Capitol during a joint press conference between NNPA and NAHP. NNPA President Benjamin Chavis, Denise Rolark Barnes, the chair of the NNPA (wearing all Black) and Martha Montoya, the president of the NAHP (2nd from right), also delivered remarks. (Freddie Allen/AMG/NNPA)

District of Columbia Congresswoman Eleanor Holmes Norton on Thursday fired off a letter to the Comptroller General of the U.S. Government Accountability Office (GAO) demanding a new report detailing federal advertising contracts and subcontracts with minority-owned newspapers and media companies.

The Democrat’s missive to the GAO comes a little more than a month after she held a press conference on Capitol Hill with leaders from the National Newspaper Publishers Association, an organization made up of more than 200 Black-owned newspapers, and the National Association of Hispanic Publications, a trade group that represents the largest Spanish language publications in the country.

At the press conference, Norton called on the GAO to perform a new study and update a 2007 report that revealed government agencies spent $4.3 billion in advertising, but just a pittance of that amount was spent with minority media publications.

She reiterated that call on Thursday.

“The federal government is the largest advertiser in the United States, and it is important that news outlets and media companies owned or published by people of color with a primary mission to serve communities of color have the same opportunities as other media outlets – especially as African-Americans and Hispanic Americans continue to grow in number in our country,” Norton said.

The Congresswoman also secured the support of a number of others in the House of Representatives.

“We believe that this request is particularly timely because GAO will be conducting an audit of spending by federal agencies on public relations and advertising,” Norton said. “We ask [the GAO] to take this opportunity to look into how much is spent with newspapers and other media companies that are owned by people of color and whose audiences are largely African-American or Hispanic.”

Norton wants an update from the GAO and more accountability. Her actions were met with enthusiasm by those in the Black and Hispanic press.

“Having a constructive relationship with members of Congress is critically important and the NNPA’s relationship with Congresswoman Eleanor Holmes Norton and Congressional Black Caucus Chair G.K. Butterfield has produced a significant step forward in getting federal agencies to do more advertising with African-American-owned and Hispanic-owned newspapers and media companies,” said Dr. Benjamin Chavis, a longtime civil rights activist and president and CEO of the NNPA.

“This is not about charity, it’s about equity, in particular what federal agencies spend is at stake,” Chavis said. “Hopefully, in the remaining months of President Barack Obama’s administration, there will be an expedited effort to correct what appears to be a gross inequity.”

NAHP Vice President Martha Montoya has said that Black and Hispanic newspapers should stay on top of the issue, demanding both accountability and constant feedback.

“Then-Sen. John Kerry had a meeting in 2006 and requested a report. We should have demanded the report every year. It should be standard compliance because it’s data everybody needs,” Montoya said.

The NNPA and NAHP have a combined reach of 43 million readers each week across the United States.

“With close to 97 million African Americans and Hispanics in the U.S. today – representing 33 percent of the total population – this consumer segment demands attention,” Montoya said. “The buying power of the African-American and Hispanic communities, currently at more than $2.3 trillion combined, continues to outpace the national average.”

GAO Spokesman Charles Young said the office remains in contact with Norton and will work with her and others going forward. 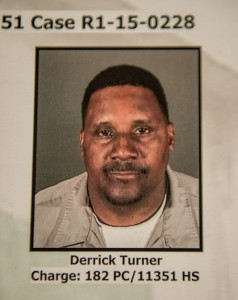