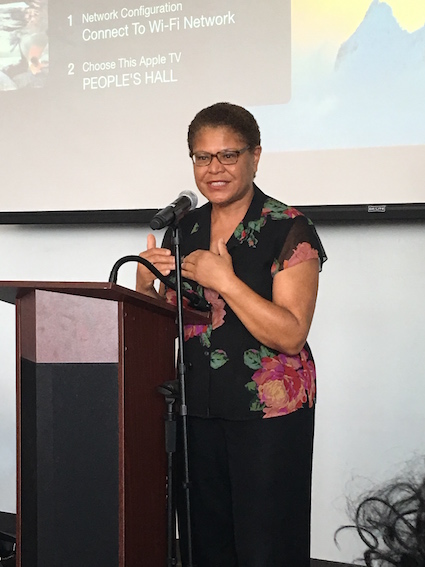 More than 150 people filled the Community Coalition for a discussion with members of the Congressional Black Caucus on gun violence.

Congresswoman Bass founded the Community Coalition in 1989. An emergency room physician assistant at the time, she called activists together to address the community’s health crises.

On July 30, she joined the Community Coalition’s call for community stakeholders to explore community-based solutions to reduce violence in our neighborhoods.

“We are here to listen, to figure out what we can take back to introduce or change in the halls of Congress, Bass stated, as she introduced her colleagues.

Before then, James welcomed guests, who filled the Community Coalition’s hall named after Rep. Bass, two overflow rooms, and the lobby to view the discussion.

James said she worries about her grandsons when it comes to violence. “They’re faced with gangs and community violence, and the solution that we always hear is we need more police, but I also worry about the police, because my grandsons have been pulled over, over, and over again, and it scares me what could happen to them,” James said.

Over the last year, the Community Coalition has hosted multiple events to provide a community space for residents to heal from local gang shootings, national mass shootings, and police shootings of unarmed Black men, women and youth across the nation.

Hundreds of residents have shared stories of their personal loss of friends and family members due to gun violence, organizers said. Organizers continued, the trauma caused by both community and state violence is deeply felt in South L.A.

Alberto Retana, president/CEO of the Community Coalition, recognized the dignitaries, which included George McKenna, LAUSD Board member and long-time educator.

Retana highlighted how at the inception of Community Coalition, Bass and others worked on solutions besides just bringing more police to the streets. “They invested in parks, and created summer programs, and created Summer Night Lights,” he said.

That summer alone, the result was zero homicides because of community-driven efforts, and that was the type of conversation they strove for July 30.

Kelly said she attended the event to learn best practices at solving gun violence in South L.A. She said she wanted to hear what the community had to say because it has made some strides. 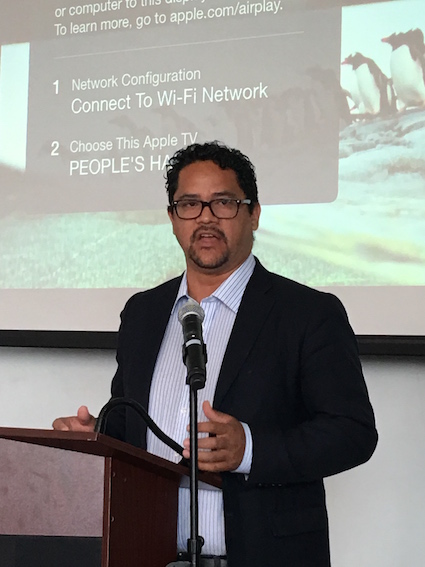 “The issue of gun violence is so important to me because I come from what we feel is the epicenter. People talk about the weekend who gets shot, and it’s everyday in the Chicagoland area, and I believe it’s the legislation, but I also think it’s community relations…,” Kelly stated.

Hahn, who is running for L.A. County Supervisor, highlighted the work of the Watts Gang Task Force as a successful national model to curb gun violence. The effort brought together law enforcement, community members, clergy, educators, residents and former and active gang members who wanted to change the history of Watts, she said. 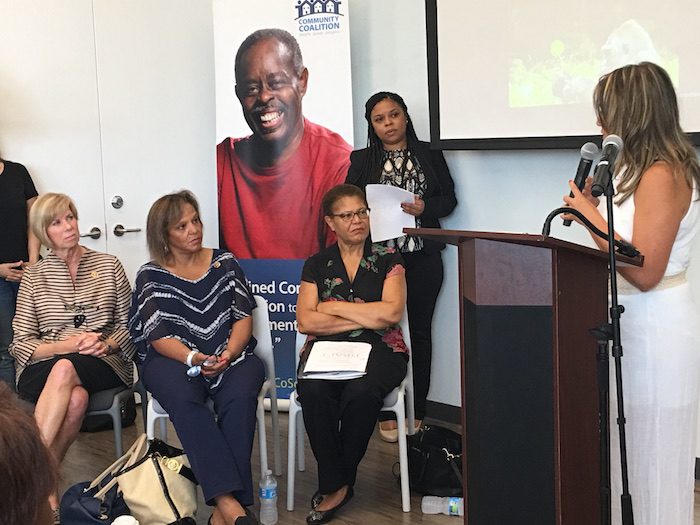 Adela Barajas, founder/executive director of Life After Uncivil Ruthless Acts, a non-profit organization dedicated to enhancing the quality of life of the residents of South Central Los Angeles, began to cry as she spoke about the cycle of violence that claimed several of her loved ones.

Likewise, Carla Acosta, who works toward affordable housing solutions for the formerly incarcerated, and is working to transform King Park, appealed for more resources. 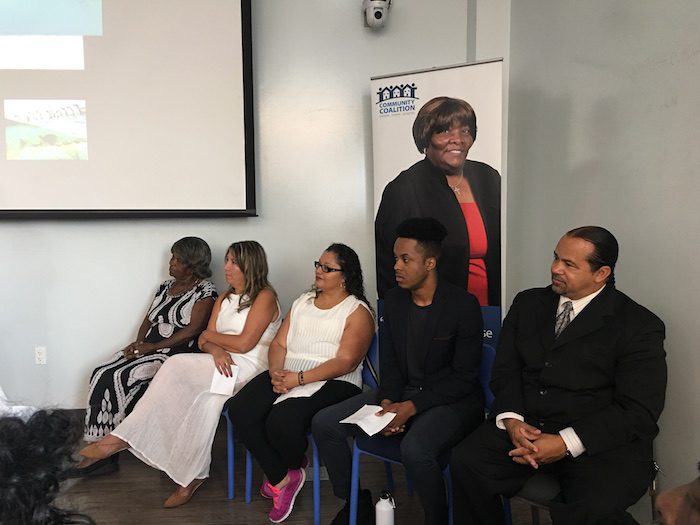 Participants wait in a long line for the question and answer session at the Community Coalition’s July 30 town hall on gun violence. (Photo by Charlene Muhammad)

Hines, a former youth leader at the Community Coalition, stated no more will the community beg for resources it needs to curb violence and other ills, but it will demand and then take what it deserves, he said.

Owens reminded some and informed other, “If you know it or not, the community you’re in is called ‘Death Alley.’” Three-hundred sixty people have been killed in L.A. this year so far, Owens said.

He expressed gratitude for two gang interventionists who put their lives on the line every day to help gain safe passages for youth. One is Roosevelt Tellis, who rides his bike as he works to forge peace, and the other, known as Twin, who’s construction van is riddled with bullet holes, because people tried to kill a peacemaker.

During Q&A, Twin appealed for implementation of safe passage and funding of grassroots efforts. Big agencies that end up seeking them out anyway get the bulk of resources, so bypass them altogether, he said.