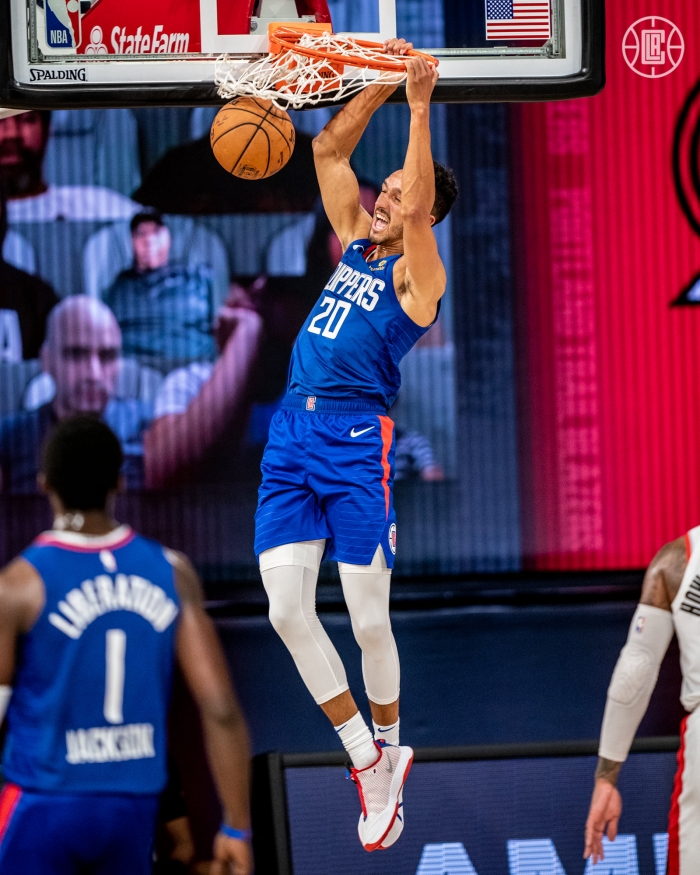 With seconds left in the game, guard Rodney McGruder takes a pass from guard Terrance Mann and rapidly launched the ball from behind the arc. This basket sealed the fate of the Portland Trailblazers as they fell 117-122 to the Los Angeles Clippers.

Forward Paul George led with 21 points and center Ivica Zubac had 12 rebounds. Six Clippers scored in the double digits in the bout. Many bench players were on the floor in the final minutes competing to secure the win. Their efforts impressed George.

“Happy the young guys went out there and delivered,” he said. “They kept plays alive, they defended well and they got us the win, closed the game out for us.”

It was a formidable fight for Los Angeles, as four Trailblazers scored over 20 points each. Guard C.J. McCollum led all scorers with 29 points and center Jusuf Nurkic grabbed 13 boards.

The contest was an offensive shootout, as Los Angeles shot at 49.4 percent from the field and Portland was 48.9 percent. The Clippers were not outgunned but were outmanned as forward Kawhi Leonard and guard Patrick Beverley were out on injury. Center Montrezl Harrell is still away from the team as he mourns the passing of his grandmother.

“It’s playoff time, we’re trying to tune up,” said Clippers guard Landry Shamat. “We weren’t full staff tonight but just trying to play hard regardless of who’s on the floor and trying to get a win.”

Forward Carmelo Anthony was efficient in the early minutes, which helped the Trailblazers get a 13-4 lead. The Clippers bounced back by finishing at the free throw line and finding their rhythm behind the arc. Guard Lou Williams gave the Clippers offensive energy, pouring in 12 points in his first seven minutes of play. However, guard Damian Lillard was there to contest him, keeping the Trailblazers ahead 37-34 at the end of the first quarter.

Los Angeles began making turnovers mid-way through the second phase. Trailblazers guard Gary Trent jr. sank three-pointers, which helped McCollum create a nine-point lead over the Clippers. Forward Marcus Morris sr. and George rallied for the Clippers but could not get a handle of the Trailblazers by halftime.

Portland came back from intermission with a five-point run. After a scoring lull, the Clippers bounced back. Landry Shamet got a dunk to tie the game at 85 with 6:32 left in the third, but Portland kept their foot on the gas. Forward Patrick Patterson scored buckets to put Los Angeles within one point of the Trailblazers.

With nine minutes left in the game, JaMychal Green hits a three-pointer to give the Clippers a one-point lead. Trent jr. remained an asset to Portland with his variety of shots. After trading baskets, the Clippers were down by five with 1:39 left in regulation.

“We trapped a lot more. I thought we were way more alert,” Clippers head coach Doc Rivers said about their play in the second half. “We had a lot more defensive mistakes in the first half and I thought we cleaned it up, and we got lucky a little bit … They missed some shots that they normally make.”

Lillard missed two consecutive free throws with seconds left in the game, which garnered taunts from Beverley and Morris sr.

“To me that’s what they expect from me down the stretch, they know what I do,” Lillard said. “[Beverley] saw it first hand when I was a second-year player when he was in Houston, so I’m sure he has a great memory of that.”

The Clippers will battle the Brooklyn Nets on August 9 at 6:00P.M. on NBA TV.