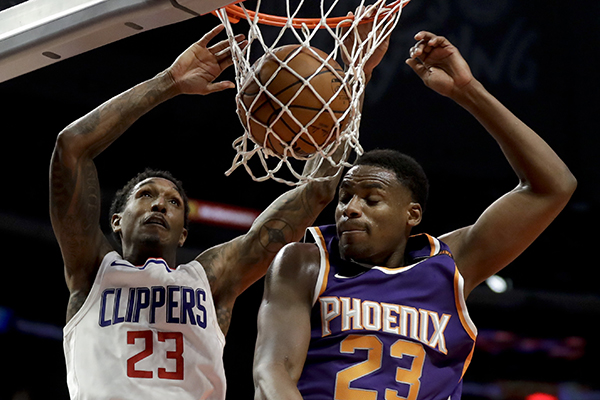 The month of December has been up and down for the Clippers, as Los Angeles came in on the night having lost six of nine games; nonetheless, put together their best defensive first half of the season Wednesday night, defeating the Phoenix Suns 108-94 at Staples Center.

“This is the best defense we’ve played all season,” said Austin Rivers after the Clippers held the Suns to 35 points in the first half, forcing a team who was without their best player in rising young star Devin Booker (left abductor strain), to shoot 36.1% from the field.

Los Angeles never trailed in the duration of the game and quickly jumped out to a comfortable 53-35 lead at halftime.

“I think everybody loves playing with Milos,” said Clippers center DeAndre Jordan after finishing his night with 20 rebounds and 12 points.

Jordan, the Clippers anchor and league’s leading rebounder, connected on five dunks on the night, as each one was more electric than the other, giving the fans a show over the course of the game.

During the third quarter, the Sun’s saw their largest deficit swell to 25 points, 71-46 after Clippers forward Jamil Wilson converted on a 25-foot three pointer.

Phoenix, however, did show heart late in the third quarter, with a 19-3 run of their own, led by TJ Warren, who poured in a game-high 22 points and 10 rebounds, while Josh Jackson added 17 points.

Teodosic seemingly grabbed momentum right back for the Clippers, closing the third quarter as he threw a full length-of-the-court pass to a cutting Lou Williams for a two- handed flush, just seconds before the buzzer expired.

LA’s unselfishness continued and was on display as they totaled 22 assists in the game, converting on 47.1 % shots from the field, while they held the Suns to 22.9% shooting from behind-the-arc.

“The ball-movement,” said coach Rivers, after what he believed really stood out to him. “I thought we really moved the ball; Milos, just the way he moves the ball is so infectious. He had a bunch of them, Austin [some], they’re just moving the ball, making simple plays and going downhill.”

“”I thought defensively, it makes two or three games in a row we’ve been pretty solid,” Rivers said.  “That allows us to win games.” 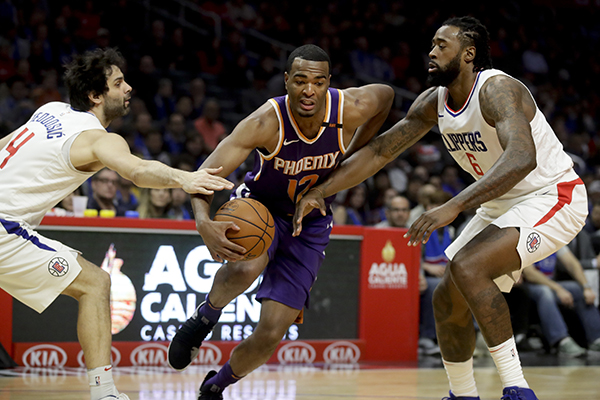 The Clippers took advantage of playing fast in transition, outscoring Phoenix 22-13 in fast break points, as well as more points from their second unit with a 46-40 edge.

Lou Williams added 18 points, while Montrezl Harrell chipped in with 11 points and six rebounds, as both players were impactful off the bench.

All in all, the injury-riddled Clippers were without Danilo Gallinari for the 19th game of the season, after learning he will be out for around “six weeks” due to a partial tear of his left glute muscle, an injury which he first suffered on Nov.5.

Wesley Johnson also missed his second straight game on Wednesday due to soreness in his left foot. They are already without starters in Blake Griffin (left collateral ligament sprain) for at least a couple more weeks and while Patrick Beverley is out for the season, suffering a lateral meniscus tear.

“It’s to the point now where if anybody is used to it, it’s our team,” added Austin Rivers on injuries so far over the course of the early season.

“Our key is we’ve just got to stay in this until we get our guys back, whoever is on the floor, let’s just attack.”

Coach Doc Rivers spoke on his newly looked starting lineup, with their young players in C.J. Williams and Jamil Wilson. Williams had 12 points and Wilson scored 11 on the night, as Los Angeles finished with six players total in double-figures.

“We had two G-League guys starting, in our starting lineup, they’re getting better each game,” added Rivers. “CJ is just a professional, he is a guy to me who belongs in the NBA. He’s just solid.”

“Jamil has a NBA skill, he can shoot the ball and he’s learning all the other parts of the game on the fly.”