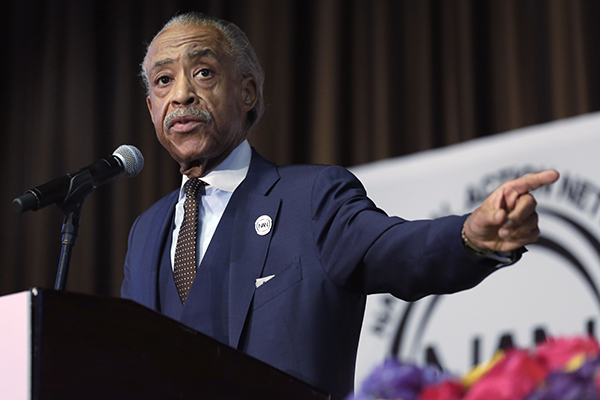 FILE – In this April 27, 2017 file photo, The Rev. Al Sharpton points to Omarosa Manigault, assistant to President Donald Trump & Director of Communications for the Office of Public Liaison, as he delivers his remarks during the Women’s Power Luncheon of the 2017 National Action Network convention, in New York. Sharpton is accusing President Trump of “encouraging police violence” during a speech this week on Long Island to an audience of uniformed officers. The activist preacher tore into Trump on Saturday, July 29 at the weekly gathering of his National Action Network in Harlem. (AP Photo/Richard Drew, File)

From October 2017 to May 2018, more than 2,700 children have been separated from their parents and the rate of those separations have risen alarmingly—in the past six weeks alone, at least 1,995 children have been taken from their parents and placed in shelter facilities that are already nearing capacity. Compounding the cruel separation, the government does not have a formal process to reunite families, leaving the very real possibility that children spend extended periods of time away from their families and in a temporary shelter facility, causing irreparable harm and trauma.

“The gathering of major civil rights leaders is to underscore our outrage at the abhorrible, immoral the administrative directive to separate children from their parents. This must be resisted at all levels. If Congress does not act today, we will begin as early as Thursday waves of visits to the border in efforts to have clergy and humanitarian visits to these children and to show the world that America has not lost its conscious or soul. The mutual aspect of this is that we more than are convinced that President Trump would not do this at the Canadian border to White children. This is selective administrative insensitivity,” said Reverend Al Sharpton, president & founder, National Action Network.