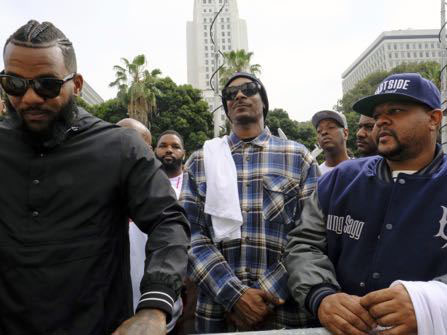 Los Angeles officials are considering making significant changes to the way they enforce gang injunctions in response to a lawsuit that accused the city of violating the constitutional rights of thousands of people, a newspaper reported on July 21, citing court documents recently made public.

The American Civil Liberties Union filed the suit last year, accusing the city and the Los Angeles Police Department of serving injunctions against people who had not been given an opportunity to prove in court that they are not gang members. The injunctions are civil court orders that bar suspected gang members from engaging in certain activities in areas where the gang is known to congregate.

In a recent filing in federal court, Deputy City Attorney Patricia Ursea acknowledged the city is planning to alter the policies that govern the injunctions, the Los Angeles Times reported. People subject to injunctions will have at least 30 days to challenge them in state court or through a city removal process before they become enforceable, according to the filing.

The city is also going to revise its criteria for removing people from injunctions, which had come under sharp criticism from the ACLU and other activists, and has considered releasing an undisclosed number of people from current injunctions, according to the filing cited by The Times.

Rob Wilcox, a spokesman for the city attorney’s office, told The Times the city will announce the policy changes when they are finalized later this year.

The city is currently enforcing 46 separate injunctions against approximately 10,000 people in Los Angeles, according to the ACLU’s lawsuit, which was filed in October of 2016. Nearly 80 gangs are subject to injunctions, according to the city attorney’s office, accounting for approximately 20 percent of Los Angeles’ known gang population. The city has used the injunctions as a tool to stifle gang crime since the late 1980s and early 1990s.