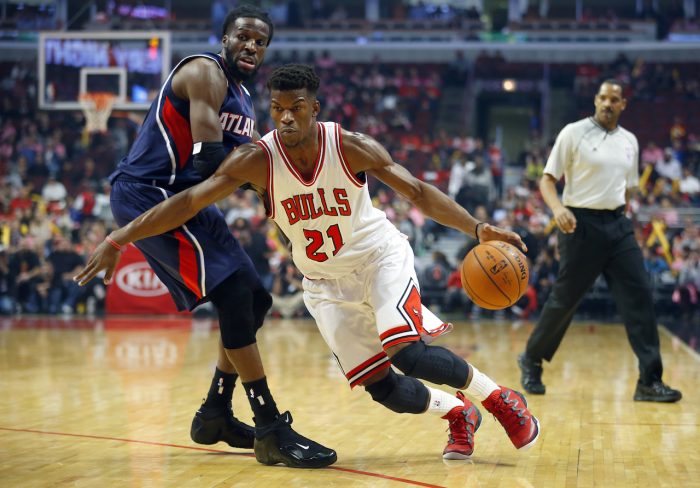 Chicago Bulls forward Jimmy Butler has received the April NBA Cares Community Assist Award presented by Kaiser Permanente in recognition of his efforts to empower and uplift at-risk youth throughout Chicago, the NBA announced today. The award recognizes an NBA player each month who best reflects the passion that the league and its players share for giving back to their communities.

Kaiser Permanente and the NBA are honoring Butler for making the one-on-one support and mentorship of Chicago’s youth a top priority. Working with one of the Bulls’ longtime community partners, Youth Guidance, Butler recently participated in its Becoming a Man™ (BAM) conversation circle at Kelvyn Park High School, where he discussed ways to improve the city with students. During two Bulls basketball tournaments with Youth Guidance and the Chicago Police Department, where officers and students played side-by-side, Butler and his teammates led conversation circles about trust, integrity and issues facing their community. Expanding his community outreach this year, Butler also provides regular dinners to homeless men and women at Pacific Garden Mission, doing so almost every month of the 2016-17 season.

“Spending time with these kids is as impactful for me as it is for them,” said Butler. “Hearing their stories and learning about what they go through motivates me to do even more for Chicago. Their desire to change the world is inspiring, and I’m proud to help them achieve any way I can.”

The NBA Cares Community Assist Award honors the standard set by NBA Legend David Robinson, who improved the community piece by piece. Kaiser Permanente and the NBA will donate $10,000 on Butler’s behalf to Youth Guidance.

Butler’s win signals the end of the monthly awards and the beginning of fan voting for the 2016-17 Seasonlong NBA Cares Community Assist Award presented by Kaiser Permanente. Fans can vote for their favorite nominee through May 5 via Facebook, Twitter and Instagram using #NBACommunityAssist and #PlayerFirstNameLastName (e.g., #JimmyButler). An NBA committee of judges will join fans in selecting the winner.

The 10 nominees include monthly winners Butler, Tobias Harris, Jrue Holiday, CJ McCollum, Elfrid Payton, Zach Randolph and Isaiah Thomas, and three additional players nominated for their exceptional community work: DeMarre Carroll, Mike Conley and Dwyane Wade. The seasonlong winner will be announced at the inaugural NBA Awards on TNT, which will be televised live on Monday, June 26 in New York. Additionally, the NBA and Kaiser Permanente will donate $25,000 to the winner’s charity of choice.