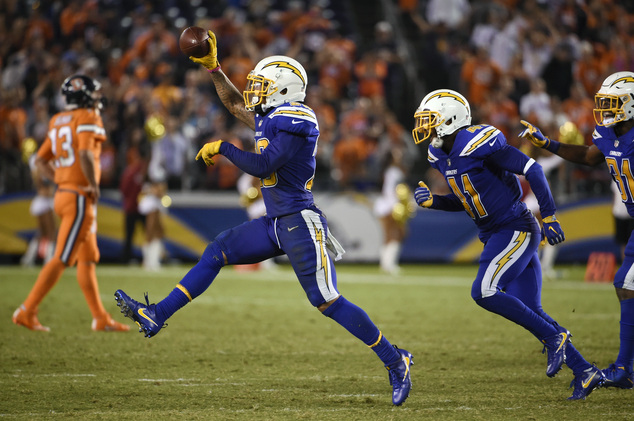 San Diego Chargers cornerback Craig Mager, center, reacts after picking up a fumble during the second half of an NFL football game as Denver Broncos quarterback Trevor Siemian back left, passes by Thursday, Oct. 13, 2016, in San Diego. (AP Photo/Denis Poroy)

The Los Angeles Chargers announced they have re-signed strong safety Jahleel Addae, long snapper Mike Windt and quarterback Kellen Clemens. Addae and Windt signed four-year contracts while Clemens signed a one-year contract. All three were signed prior to becoming unrestricted free agents on the expiration of their old contracts.

Nicknamed “The Hitman,” the 5-10, 195-pound Addae is one of the Chargers’ hardest hitters. After a career-high 65-tackle season in 2015, Addae was looking forward to a big year in 2016. He racked up 13 tackles in the Chargers’ first two games, but late in the team’s Week 2 contest against the Jaguars, Addae suffered a collarbone injury that sidelined him for the next eight games. He returned to the starting lineup to help fuel a late-November win in Houston and started the final six games. Addae finished the 2016 season with 49 tackles and capped the year with his first NFL interception, returning it 90 yards for a touchdown in the Bolts’ season finale against Kansas City. It was the seventh-longest interception return in franchise history.

Addae originally joined the Chargers in 2013 as an undrafted rookie from Central Michigan. His career totals include 48 games played with 27 starts, 194 tackles, three sacks, one interception, 10 passes defensed and 16 stops on special teams. Addae also has played in two postseason games with one start where he’s recorded 13 tackles, one pass defensed and a forced fumble.

The 2017 season marks Windt’s eighth with the Chargers after joining the team midway through the 2010 campaign. He has appeared in 101 career games. The 6-1, 237-pound product out of Cincinnati has been a mainstay on special teams, appearing in 66 consecutive games, including two postseason contests, since suffering a wrist injury in 2012.

Clemens returns for his fourth season with the team. The 11-year veteran was originally a second-round pick of the New York Jets in 2006, and has also spent time with the Rams and Texans. He has started 21 career games and completed 344 of 630 passes for 4,017 yards and 16 TDs since entering the NFL. Since joining the Chargers in 2014, the 6-2, 220-pound passer has seen limited action, completing six of 10 passes for 73 yards and one touchdown in three seasons.

The Chargers signed Toomer off the Raiders’ practice squad early last season, and he immediately made an impact. He totaled 69 tackles, nine tackles for loss, three forced fumbles and one sack in 13 games with eight starts. The 28-year-old also ranked fourth on the team with four special teams tackles. Toomer played in 18 games with the Raiders, Texans and Cowboys prior to joining the Chargers. Toomer came to the NFL as a fifth-round choice of the Seahawks in 2012.