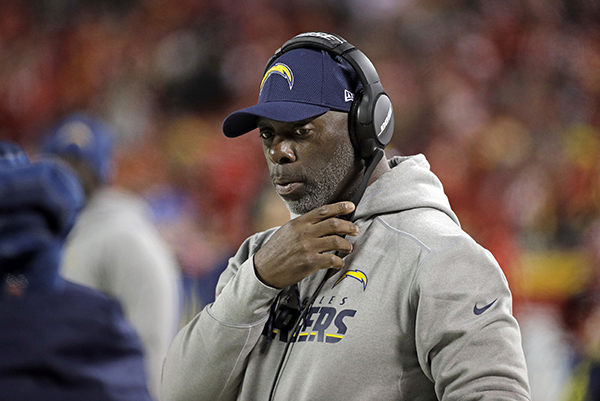 FILE – In this Dec. 16, 2017, file photo, Los Angeles Chargers coach Anthony Lynn adjusts his headset before the team’s NFL football game against the Kansas City Chiefs in Kansas City, Mo. The Chargers have a chance to make the playoffs after their 0-4 start, but they can’t do it without a win over the Oakland Raiders on Sunday and some help elsewhere in the league. Lynn plans to prevent video boards at StubHub Center from showing the scores of other NFL games while the Chargers finish out their season. (AP Photo/Charlie Riedel, File)

Los Angeles Chargers head coach Anthony Lynn finalized his coaching staff for the 2018 season.  Lynn kept the majority of his staff intact, returning 17 coaches from the 2017 season while welcoming four new coaches for the upcoming year.
The Chargers kept continuity at the coordinator positions as Ken Whisenhunt, Gus Bradley and George Stewart return. Whisenhunt will guide the offense for the fourth year, and third straight season, while Bradley will oversee the defense for the second straight year and Stewart will guide the special teams for his second year with the organization.
Whisenhunt controlled the top passing offense in the NFL and the fourth-ranked total offense in 2017. Under his watch, Philip Rivers was selected to his seventh Pro Bowl after ranking second in the league in passing yards. Wide receiver Keenan Allen earned his first Pro Bowl nod and was named the AP Comeback Player of the Year after breaking the Chargers single-season receptions record with 102. He also ranked third in the NFL with 1,393 receiving yards. Melvin Gordon became the first Chargers running back to amass over 1,000 rushing yards since 2013 when he totaled 1,105 yards on the ground this past fall.
Bradley orchestrated a huge turnaround on the defensive side as the Chargers ranked third in the league, allowing 17 points per game. The 17 points per game was the best mark by the team since 1992 and nearly a 10 points-per-game improvement from 2016. The Chargers ranked third in the NFL against the pass, were the best in the red zone, posted a plus-12 turnover margin and ranked fifth in sacks. Joey Bosa and Melvin Ingram became the first Chargers duo since 2006 to post double-digit sacks in the same season.
Stewart, who will enter his 30th season as a NFL coach in 2018, helped Drew Kaser post the second-best single-season punting average in team history at 48.1, a mark that also ranked third in the league. Punt returner Travis Benjamin ranked eighth in the NFL in punt return average while Nick Dzubnar was second in the league in special teams tackles.
Six of the eight position coaches return to the fold. Offensive line coach Pat Meyer, who directed his unit to lead the league with the least amount of sacks allowed (18), will enter his second season with the Chargers. Defensive backs coach Ron Milus will enter his sixth season with the organization after helping guide the squad to rank fourth in the NFL in interceptions. Running backs coachAlfredo Roberts also enters his second season with the team. Under his tutelage, Melvin Gordon posted the first 1,000-yard rushing season of his career.
Giff Smith, who has been instrumental in the development of Joey Bosa, returns for his third season as the defensive line coach whileRichard Smith will guide the linebackers for his second season with the organization. Shane Steichen will command the quarterback room for the third season and enter his seventh year with the Chargers. Steichen helped Rivers post his best quarterback rating since 2013 and oversaw the top passing offense in the NFL.
Rip Scherer is one of the new hires among the position coaches as the veteran coach comes down the road from UCLA to oversee the tight ends. Scherer was the associate head coach under Jim Mora where he coached tight ends for two seasons. Scherer, who has over 35 years of coaching experience, returns to the NFL where he previously served as the quarterbacks coach for the Carolina Panthers and the Cleveland Browns.
Phil McGeoghan also joins the Bolts staff and will enter his first year as the wide receivers coach after completing his first year with the Buffalo Bills in the same position. McGeoghan has spent time as a wide receivers coach at the NFL and college ranks, also coaching the receivers for the Miami Dolphins while making stops at East Carolina, South Florida, Naval Academy Prep and Maine.
Chris Harris returns for his third season as the assistant defensive backs coach while Eric Henderson will serve as the assistant defensive line coach for the second straight year. After spending six seasons with the organization, his last as an offensive assistant,Mark Ridgley will serve as the assistant offensive line coach in 2018.
One of the new assistants on the staff is Keith Burns, who will begin his first season as the assistant special teams coach for the Chargers. Burns, the former special teams coordinator for the Washington Redskins and an assistant special teams coach for the Denver Broncos, played 13 seasons in the NFL, including 11 for the Broncos where he was a special teams captain under Mike Shanahan.
Dan Shamash begins his 10th season in the NFL and his second as the Chargers quality control for the offense. Marquice Williamsenters his third season with the team and will serve as a defensive assistant while Addison Lynch comes from Florida State and will enter his first season as quality control for defense. All three strength and conditioning coaches return as well, led by head strength and conditioning coach John Lott. Lott will once again be joined by Jonathan Brooks and Larry Jackson for their second season with the organization.
2018 Coaching Staff
Anthony Lynn – Head Coach
George Stewart – Special Teams Coordinator/Assistant Head Coach
Gus Bradley – Defensive Coordinator
Ken Whisenhunt – Offensive Coordinator
Phil McGeoghan – Wide Receivers
Pat Meyer – Offensive Line
Ron Milus – Defensive Backs
Alfredo Roberts – Running Backs
Rip Scherer – Tight Ends
Giff Smith – Defensive Line
Richard Smith – Linebackers
Shane Steichen – Quarterbacks
Keith Burns – Assistant Special Teams
Chris Harris – Assistant Defensive Backs
Eric Henderson – Assistant Defensive Line
Addison Lynch – Quality Control-Defense
Mark Ridgley – Assistant Offensive Line
Dan Shamash – Quality Control-Offense
Marquice Williams – Defensive Assistant
John Lott – Head Strength and Conditioning
Jonathan Brooks – Strength and Conditioning
Larry Jackson – Strength and Conditioning
ADVERTISEMENT
ADVERTISEMENT
Categories: Football | Sports
Tags: Anthony Lynn | coaches | George Stewart | Gus Bradley | Keenan Allen | Ken Whisenhunt | Los Angeles Chargers | Melvin Gordon | Melvin Ingram