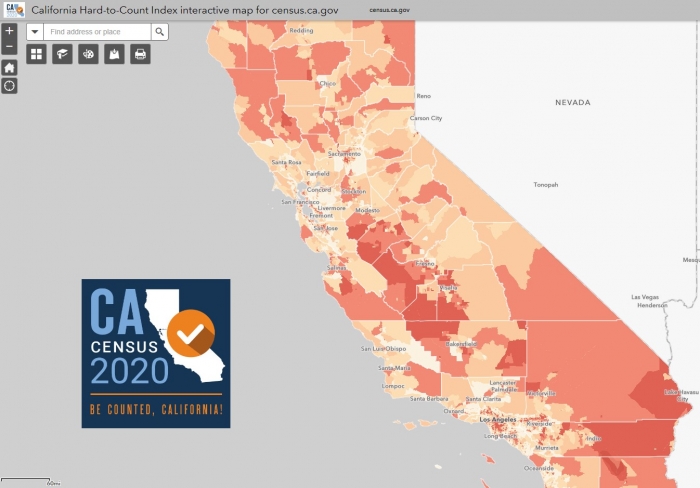 The California Complete Count Committee’s Interactive Hard to Count Map, as shown on their website (Courtesy of Census.ca.gov).

Members of the California Complete Count Committee met in Sacramento June 4, to discuss their statewide outreach and communication strategy for 2020, keeping with their mission of getting everyone counted and connected to appropriate resources. The official Census count will begin April 1 of next year, and the committee wants to ensure they reach everyone, especially those who are “hard to count,” they said. Those include immigrant renters, children under 5 and those living below the poverty line.

Those that are considered hard-to-count (HTC) are least likely to respond to the Census questionnaire without specialized outreach and assistance.

That puts California at risk, they said, of being undercounted for vital resources like public health and education programs, roads and housing. It will also pose the risk of California being underrepresented in the House of Representatives. The CCCC is trying to mitigate these risks before the count begins.

“A lot of Californians have a fear of the government and that’s what makes them difficult to count,” said Diana Crofts-Pelayo, communications chief for the California Complete Count Committee (CCCC). “That’s why state leaders have invested in doing everything possible to help Californians understand what the Census is, understanding the importance of the Census and how it benefits the community.”

According to CCCC, California leaders have invested $100.3 million toward its campaign efforts. In total this is a proposed $154.3 million investment for the 2020 Census.

A large part of the committee’s efforts will include meetings, a variety of events, webinars, consultations and convenings.

“As chair of the Complete Count Committee, I’m calling for all hands on deck for the 2020 Census,” said Secretary of State Padilla, who Governor Gavin Newsome appointed in April.

“The 2020 Census will help define California for the next decade. Our voice in Congress and presidential elections is on the line. Billions of dollars—for our schools, roads, and health services—are on the line. Participating in the census directly matters for our communities. We will need everyone – including the state legislature, state departments, businesses, and community organizations – to work together to reach hard-to-count communities.”

According to an interactive map on CCCC’s website, Los Angeles alone has a hard to count index of 86, compared to a state wide average of 37. The variables most correlated with this tract’s CA-HTC Index, committee members said are:

“The Census is at the foundation of American democracy and there is only once chance to get the Census right,” Padilla said.

“The consequences of an undercount will be felt for a decade. An accurate Census is needed to determine representation in Congress; drive the redistricting process; and properly allocate funding for our roads, schools and health care in our communities.”

The California Complete Count Committee (Committee) is an advisory panel that helps to develop, recommend, and assist in the administration of a Census outreach strategy to encourage full participation in the 2020 Census. Established by Executive Order B-49-18 on April 13, 2018, the Committee’s members work to recommend strategies to increase the count in their respective communities. The members are appointed by the California Governor, including one designee chosen by the Speaker of the State Assembly and one designee chosen by the State Senate President pro Tempore.

For more information on how to participate in next year’s count, visit census.ca.gov/committee.