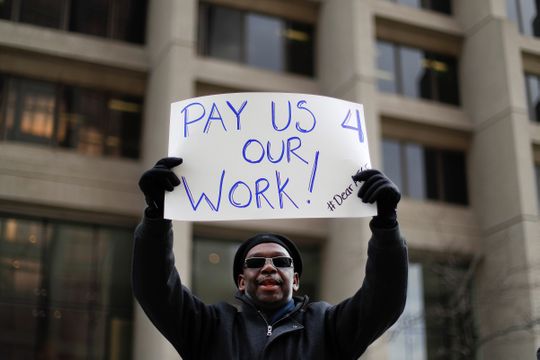 Christopher Belcher, a Department of Veterans Affairs employee, holds a sign during a rally to call for an end to the partial government shutdown, in Detroit, Jan. 10, 2019. (Photo: Paul Sancya, AP)

During a press call last week, members of the Congressional Black Caucus said that among other consequences, African Americans will be disproportionately affected by what is now known as the longest government shutdown in U.S. history. The group makes up about 18 percent of the Federal worker population and Friday, January 10, was the first day that Federal workers could not receive they’re paychecks.  They are urging President Donald Trump to end the shutdown now.

“Today is especially painful for so many workers because it should be pay day,” said Congresswoman Barbara Lee on January 10, during the call.

“But without these paychecks, many federal workers are hanging on by a thread. I know that there are hundreds of thousands families out there who are grappling with the anxiety of not being able to pay their bills as this shutdown drags on.”

The shutdown began December 22, 2018 when Trump wanted to include allowance for $5.7 million to fund a border wall between Mexico and the United States in a government funding bill. But Democrats  refused to support the bill if it included funding for the wall over questions on its effectiveness and the amount required, causing it to fail to achieve a majority vote to pass it through to Congress. Trump said he would shut the government down until he gets approval for the border wall and has since threatened to continue with the shutdown or declare a national emergency to push forward with the wall without Congress’ approval.

To do that, said CBC members, would then cut into funding already earmarked for rebuild efforts of other “real” national disasters.

“We have ongoing declared disasters in California, Texas, Florida, South Carolina, North Carolina, Puerto Rico and the Virgin Islands as we speak,” said Chairman of Homeland Security Benny Thompson during the call.

“We’re still working through things like Hurricane Sandy, etc. on the East Coast…”

Meanwhile, the shutdown has impacted about 800,000 Federal workers. According to news reports, approximately 420,000 workers have been required to work without pay, including those within federal law enforcement and national security positions such as the FBI, Border Patrol, Secret Service and Transportation Security Administration agents, while the remainder were furloughed. The extended shutdown has prompted workers to call in sick, find other paid work, or to protest against the shutdown. Other consequences have included sharp reductions in SNAP payments and delays towards completing tax refunds worth around $140 billion.

“There are hundreds of thousands families out there who are grappling with the anxiety of not being able to pay their bills as this shutdown drags on,” Lee said.

“President Trump is holding this government hostage and holding people hostage in order to get his wasteful, useless wall. This is a disgrace and it’s the American people who are paying the price.

“People are selling their cars, picking up second jobs and applying for food stamps just to keep afloat. Given the decades of workplace discrimination, Many African Americans have turned to the public sector of employment for good jobs. Now, many of them are not receiving a paycheck today.

“We know that 63 percent of black families do not have enough in their savings to cover a $400 emergency expense. For families living paycheck to paycheck, this shutdown is clearly an emergency. There are no savings to fall back on. And, there are African Americans, through economic disparity, who need federal government services that are now in jeopardy, this includes SNAP benefits, WIC and affordable housing initiatives.

“Without the certainty of these benefits in March, poor families, who struggle to put food on the table could fall further into poverty…”

Other consequences include threats to homeland security and some CBC members think the shutdown is a distraction from real issues, like whether the President has committed treason.

“This shutdown and the whole issue of the wall is a fake crisis,” said Rep Karen Bass, CBC chair.

“ At the end of the day, even if he had all the money, it would still take eminent domain to build his wall. That process will take years. This is further evidence that this is a fake crisis and, in my opinion, just an attempt to change our attention away from the numerous impending investigations…”

“Our message to Trump is simple,” said Lee.