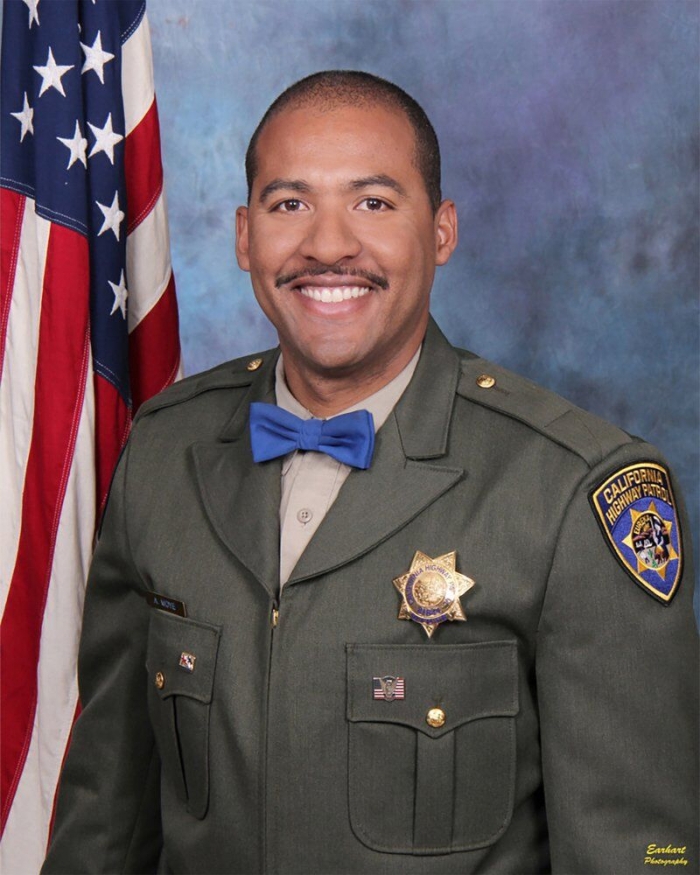 In this undated photo release by the California Highway Patrol, Officer Andre Moye Jr. A driver stopped by police pulled out a rifle and opened fire, killing Moye and wounding a few others during a shootout on a freeway overpass that left the gunman dead and sent terrified motorists running for cover. (David Earhart/Earhart Photography/California Highway Patrol via AP)

The man who suddenly grabbed a rifle and opened fire during a traffic stop just off a Southern California freeway had a long and violent criminal history that the police officer he killed most likely knew nothing about as he filled out paperwork alongside the road.

California Highway Patrol Officer Andre Moye, Jr., was getting ready to impound Aaron Luther’s pickup truck when Luther, who was outside the vehicle and not restrained, reached inside, pulled out a rifle and started shooting on an overpass to the 215 Freeway in Riverside.

Moye, 34, was fatally wounded but called for help and two responding officers were shot in the legs while frightened motorists ducked for cover from dozens of flying bullets.

Public records showing a person’s criminal history aren’t typically something an officer has access to during a traffic stop. CHP Inland Division Chief Bill Dance said it’s not clear whether Moye asked a dispatcher to seek any additional information on Luther, 49, who was convicted of attempted murder in 1994 and also had convictions for assault, domestic violence, unlawful possession of a firearm and battery.

John Aresta, police chief in Malverne, New York, and a past president of the New York State Association of Chiefs of Police, said an officer would have almost no way of knowing a driver’s criminal history during a traffic stop. When an officer runs a vehicle’s license plate and a driver’s license, the reports will usually come back listing the registered owner, if it’s been reported stolen and if the license has been suspended or revoked. Active warrants may also be available, he said.

Luther did have a bench warrant dating from 2017 after he failed to appear in court to answer a CHP misdemeanor for driving with a suspended or revoked license.

Moye had been with the CHP for about three years and was a motorcycle officer for roughly a year.

“His mother told me this was his dream job and he loved going to work,” Dance said. “It’s what he always wanted to do.”

Gov. Gavin Newsom ordered flags at half-staff Tuesday at the state Capitol and called Moye’s death devastating. Newsom, who took office in January, said he’s already been to “too many” funerals of officers killed in the line of duty.

“It’s just unacceptable and we need to push back against any notion that these folks are not the heroes that they are,” he said, adding that the death is another example of the “normalization of gun violence that we’ve long accepted in this country but no other country in the world would accept.”

Luther’s wife and father, meanwhile, were trying to make sense of his actions. They offered condolences to Moye’s family.

“I’m so sorry for the officer,” Luther’s wife, McKenzie Luther, told the Southern California News Group. “I know his family is going through the same thing I am.” 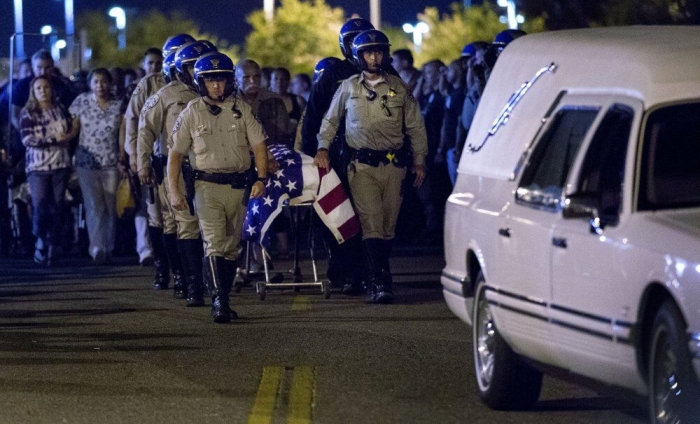 The casket of slain CHP officer Andre Moye is transported to a hearse from the Riverside University Health Systems Medical Center after he was shot and killed while two fellow officers were wounded during a traffic stop on Eastridge Avenue overpass over the 215 Freeway in Riverside in Moreno Valley, Calif., on Monday, Aug 12, 2019. (Terry Pierson/The Orange County Register via AP)

She said her husband called her after he was stopped Monday afternoon. He told her he was pulled over for driving alone in the carpool lane and had an expired license and no registration. He said his truck was being impounded and asked her to give him a ride.

She arrived at the scene during the shootout and a bullet pierced the windshield of the car she was driving in with her children.

She said he was depressed and suggested he might have wanted officers to kill him.

Luther was paroled from state prison in 2004 after serving about 10 years of a 12-year sentence for attempted second-degree murder with an enhancement for the use of a firearm, first-degree burglary and second-degree burglary, according to the California Department of Corrections and Rehabilitation.

Court records show Luther also was arrested in 2007 on felony assault charges and took a no-contest plea deal that sentenced him to 90 days in jail. He also was charged with multiple felonies in San Bernardino County and pleaded no contest in 2010 to assault with a deadly weapon, according to the Southern California News Group.

As a felon, Luther was not supposed to have a gun and his father, Dennis Luther, said he’s not sure how his son came to possess one. He said his son had struggled with drugs, was depressed and in pain from knee injuries that left him unable to work his construction job.

Luther said his son was living off and on with his wife and three pre-teen children in Beaumont, near Riverside.

“I think he couldn’t cope with his marital problems,” Luther said. But the children “were everything to him.”

Aaron Luther was a top skateboarder growing up but he began using drugs and “that’s what ruined him,” Dennis Luther said. “I’m devastated.” 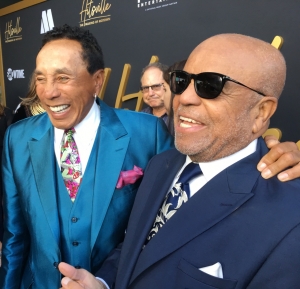