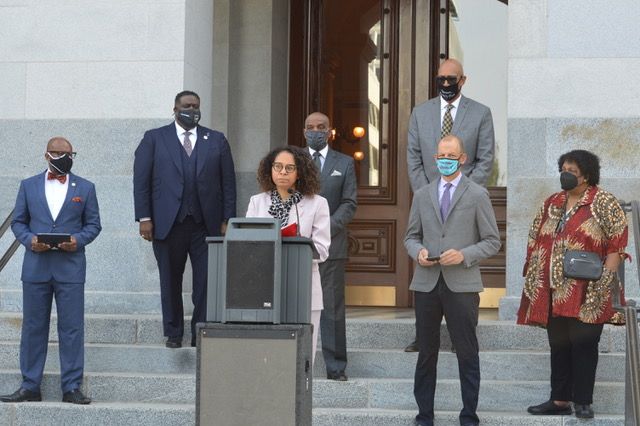 “The hard truth,” Gov. Newsom said in an April 20 statement, “is that if George Floyd looked like me, he’d still be alive today.” Newsom made the remark after a Hennepin County jury found Minneapolis police officer Derek Chauvin, 45, guilty in the murder of George Floyd.

The jury convicted Chauvin on two counts of murder, homicide and one of manslaughter, for pinning his knee on the neck of Floyd for nine minutes and 29 seconds on May 25, 2020.

The California governor joined other Golden State officials to speak out about the verdict and the enduring problems of police violence against unarmed citizens, particularly African American suspects.

“No conviction can repair the harm done to George Floyd and his family, but today’s verdict provides some accountability as we work to root out the racial injustice that haunts our society,” the governor continued. “We must continue the work of fighting systemic racism and excessive use of force. It’s why I signed some of the nation’s most progressive police reform legislation into law. I will continue working with community leaders across the state to hear concerns and support peaceful expression.”

Sen. Steve Bradford (D-Gardena), chair of the California Legislative Black Caucus, took to Twitter to comment on the verdict.

“I’m overwhelmed to tears over this verdict: Guilty. #GeorgeFloyd did not have to die that day. His family is still healing from this trauma. We must continue to fight for justice in this country, for all of us,” he tweeted.

Earlier in the day, the California Legislative Black Caucus held a press conference to address police brutality and lethal force by peace officers in California and across the country.

Kamlager, along with her colleagues – including Assemblymember Mike Gipson, who Assembly Speaker Anthony Rendon (D-Lakewood) appointed Chair of the Select Committee on Police Reform – for the briefing. They called on their peers to pass the C.R.I.S.I.S. Act, or Assembly Bill (AB) 2054, legislation that proposes that communities rely on social worker be relied on to intervene in some public safety incidents instead of police officers.

The bill was first introduced last year, but it died in committee.

“You know it’s really hard after 410 years in this country to continue to raise the same issues over and over again,” Dr. Weber said. “When I look and begin to analyze it I realize that all we’re asking is to have what everybody else has…to be treated fairly. To be treated as a human being. To be treated just.”

“It was very clear that our very right to breath was on trial,” Callender told California Black Media. “For too long African Americans have been subjected to the knee of injustice choking us out – in so many different ways. This verdict demonstrates that a badge is never a shield for accountability.”

Speaking from San Diego, Shane Harris, founder and president of the People’s Association of Justice, a national civil rights alliance that started in California, said the Floyd verdict represents a starting point for reimagining policing in America through federal legislation.

“The reality is that there is a Derek Chauvin in a police department near you and the question is whether our local, state and federal governments will step up to protect the next George Floyd from being killed in our country,” he said. Chauvin had multiple complaints against him during his career on the Minneapolis Police force, but the city and the department failed to act. We will not have an Attorney General like Keith Ellison in every state going forward to press for justice like he did which is why I call on the U.S. Senate to urgently bring the George Floyd Justice in Policing Act of 2021 to the Senate floor now, pass the legislation and send it to the President’s desk to sign immediately.”

After 12 hours of deliberations – as people across the country and around the globe waited in anticipation – for the jury returned with the verdict that held Chavin responsible for second-degree unintentional murder, third-degree murder, and second-degree manslaughter.

The jury consisted of six Black or multiracial people along with six White individuals. Chauvin’s attorney requested bail, but the presiding judge revoked their proposal and he was taken into custody.

Under Minnesota laws, Chauvin could get a sentence of up to 40 years in prison.

Califironia Congresswoman and Speaker of the United States House of Representatives Nancy Pelosi (D-CA-12) drew some criticism on social media for a statement she made regarding the verdict. Her critics chided the Speaker for thanking Floyd for his “sacrifice,” a man who they point out was unwittingly murdered by a police officer.

Standing with members of the Congressional Black Caucus in front of the U.S. Capitol, Pelosi said, “Thank you George Floyd, for sacrificing your life for justice. For being there to call out to your mom, how heartbreaking was that, call out for you mom, ‘I can’t breathe.”

“But because of you and because of thousands, millions of people around the world who came out for justice, your name will always be synonymous with justice,” the Speaker said.