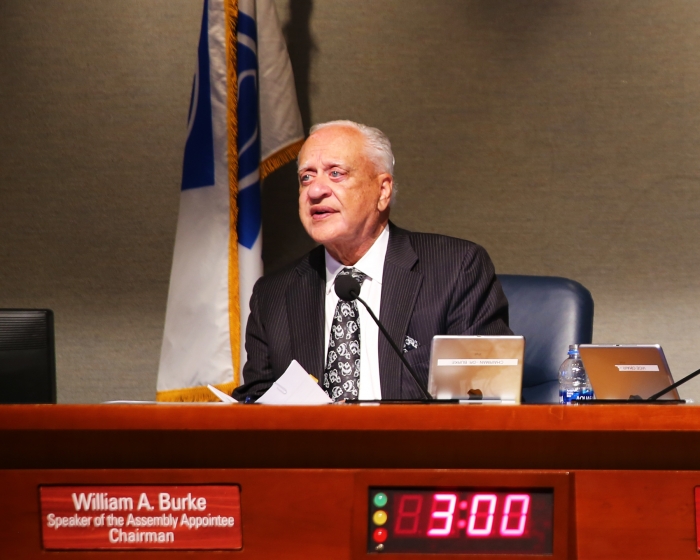 In an unprecedented move, the governing board of the South Coast Air Quality Management District re-elected Dr. William A. “Bill” Burke as chairman on Nov. 1. The historic selection marks Burke’s 13th term as head of the agency responsible for promoting clean air in Los Angeles, Orange, San Bernardino, and Riverside counties.

Burke, who was first appointed in 1993 by then-Speaker of the Assembly Willie L. Brown, Jr., becomes the longest-tenured member and the longest-serving chairman of the AQMD board. His new term begins on Jan. 14, 2020. But, despite his years of service, he remains inspired by the agency’s mission.

“My motivation is in the people. When you see the number of people and their families who are still affected by bad air quality, it motivates you to keep on going,” explained Burke.

“Everybody gets tired, but the motivation keeps me going and I am excited about the future of the agency. I am so proud of all the accomplishments we have made towards improving air quality and am just so pleased that my colleagues have faith in me to re-elect me,” noted Burke, who cited two areas that AQMD will focus on in the coming months.

One of his top concerns is the dangerous amount of pollution generated by freeway truck traffic. Describing the rate as “unreachable in the regulation stage,” Burke said the dirty air adversely affects neighborhoods that are near freeways. To reduce the impact, he and AQMD staff are working on an initiative to provide drivers with cleaner trucks.

Another priority for Burke concerns aid for pregnant women and their unborn children. Studies by Dr. Keith Black, neurosurgery chair at Cedars-Sinai, have shown that a micro-pollution can enter the lung wall of a pregnant woman when she breathes.

“The micro-pollution enters her bloodstream and then to her baby, which can cause brain cancer in both of them,” said Burke. “Now that is totally unacceptable. So, we are definitely spending time, money and energy into the research and correction of that problem.”

When it comes to improving air quality, Burke has a winning record of tackling problems. Under his leadership, the board has issued a range of significant policies such as the environmental justice program, the Asthma and Outdoor Air Quality Consortium, and the Brain & Lung Tumor and Air Pollution Foundation 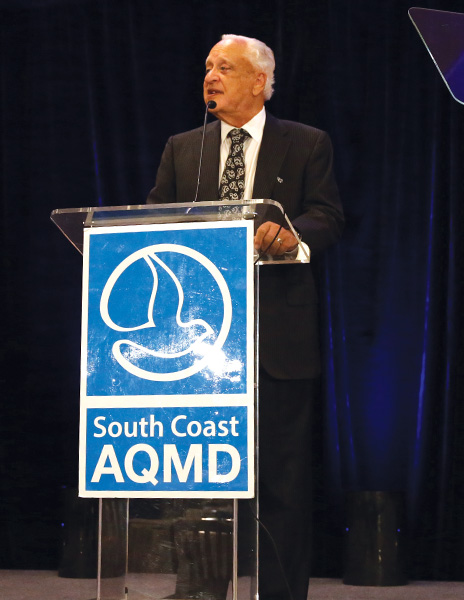 Burke’s deliberate approach to solving problems may stem from being an accomplished businessman where he achieved success in a variety of fields. He founded the American Health Care Delivery Corporation and served as chairman of Genesis International, a real estate and mining development holding company. Next, Burke directed the planning and construction of mining concessions in Liberia, West Africa for the World Mining Development.

His public service is equally notable. Widely known as the founder of the Los Angeles Marathon in 1986, Burke also created the Los Angeles Vintage Grand Prix in 1997, which grew from being the largest vintage automobile street race ever held to featuring multiple types of racing four years later, including an electric truck race, Indy car race, NASCAR race, and Pro-Porsche division race.

As a result of his community involvement, Burke has been the recipient of the Meritorious Service Award from the city of Los Angeles, the First Annual Living Legends Award, the Humanitarian Award from the Mid-City Chamber of Commerce, and the Green Power Foundation’s Man of the Year Award.

However, a review of Burke’s bio – which includes his Doctorate of Education degree from the University of Massachusetts – reveals that bettering the lives of others is a trait that has followed him throughout his life. That characteristic likely influences him as he prepares to serve another term as chair of the South Coast AQMD.

“We will continue our fight towards clean air to better protect the health of all residents, especially children, older adults, and residents in disadvantaged communities – those who are the most vulnerable to the effects of air pollution,” insisted Burke, who also invited the public to join his efforts.