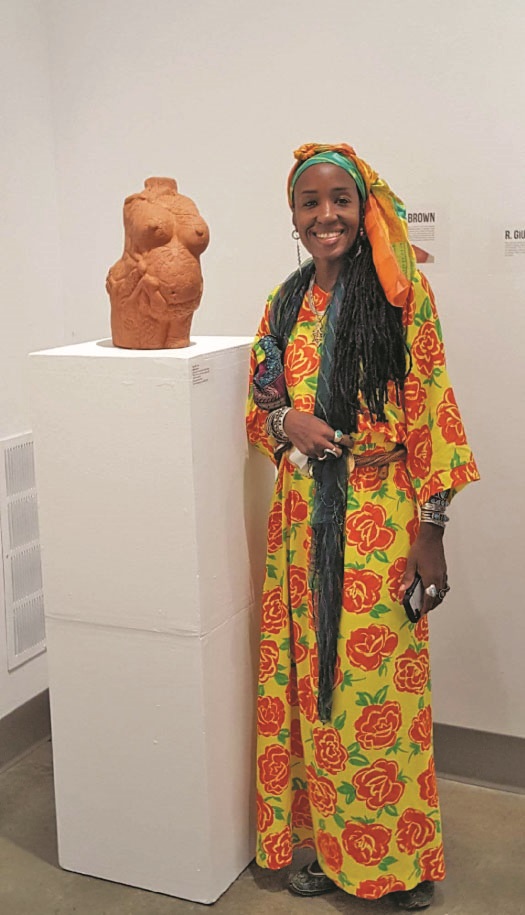 Ronda Brown with her ceramic sculpture, “Contain Her,” displayed at the Kellogg University Art Gallery in 2017. (Courtesy photo)

Viewing Ronda Brown’s work is like traveling through time. Her clay sculptures evoke an ancient mysticism, while her digital collages imply futuristic connections.

Creating impactful art has been Brown’s passion since childhood and she has continuously designed memorable pieces throughout her life. Her work ranges from ceramic statues to pastel paintings to dramatic reliefs to computer art.

Being a multi-disciplinary artist is a perfect fit for Brown, a Los Angeles native currently based in Leimert Park. Attaining proficiency in several mediums also helps in her position as the lead teacher for Crenshaw High School’s Visual and Performance Magnet program.

“I’m really focused on cultivating and positively impacting youth, so I use the genesis of the art form to impart invaluable lessons in history, culture and progress to inspire limitless possibilities in my students,” said Brown. 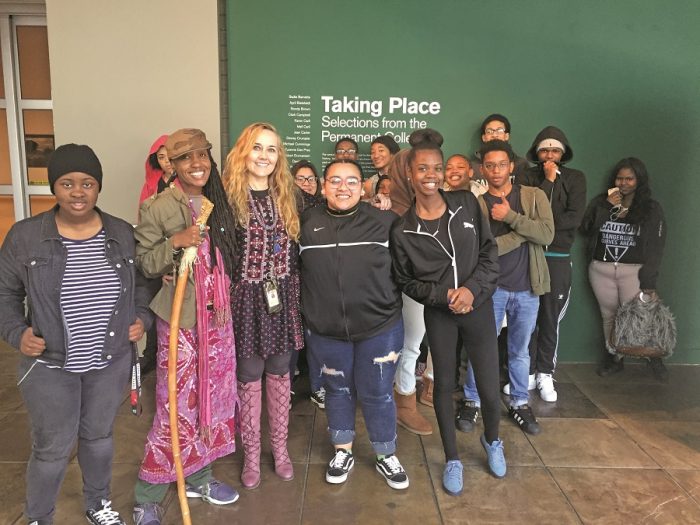 “Since many of my students are aspiring professional artists, I encourage them to live, breathe, drink, eat and practice their craft, which will help them to improve both their skills and the creativity in their mind,” she explained. “That means you do it all the time when you can. You only improve your skill by doing it.”

Practicing what she preaches, Brown devotes significant time in her off-hours to developing and creating art. For the past eight years, she has attended Otis Institute Continuing Education, taking advantage of classes offered to LAUSD teachers.

At Otis, she resumed working with clay after a 16-year absence and rekindled her love of designing pieces that are “dedicated to the divine feminine energy and the universal balance.” Also, Brown has created several digital collages including a series using NASA space photos.

“I collage space photos of star constellations where you definitely get a focus of something other than the stars,” she said. “Another series that I do is take images of sacred locations from around the earth and reassemble them into one location. It shows how we are more alike than not alike, not just as people but also geographical sites.” 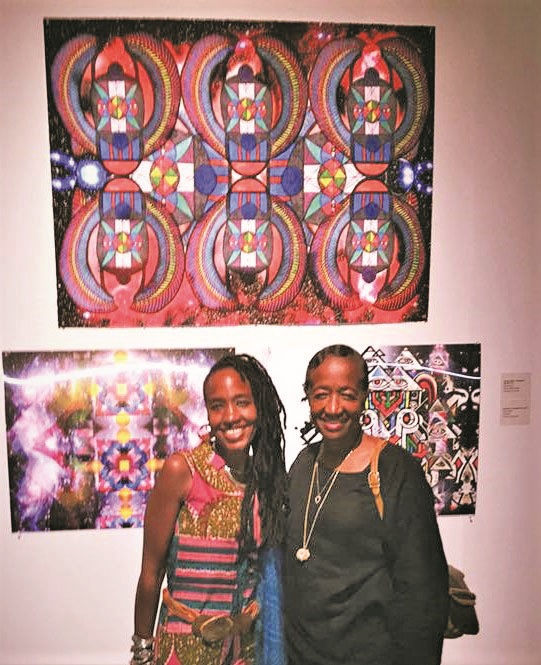 Brown and her mother, Shirley Brown, at the opening pose in front of Brown’s work in CAAM’s “Hard Edge” exhibit in 2016. (Courtesy photo)

Brown’s talent has not gone unnoticed. Her works have been exhibited at Saint Mary’s College Museum of Art in Moraga, California, the Raw Space Gallery in New York City, and at KROMA Gallery during the Art Basel in Miami, Florida. Last year, her art appeared locally at the Kellogg University Art Gallery in Pomona and the Underground Museum in Los Angeles. The California African American Museum in Exposition Park also included one of her digital collages in their permanent collection, “Taken Place.”

In recognition of her art talent, Brown has been honored with the Jabonsky Award for Three Dimensional Work, two Connor Awards and three Mary T. Potter Awards. While completing her Master’s degree at the City University of New York, she received the Best Master of Fine Arts Thesis Exhibition.

Looking towards the future, Brown aims to continue to pursue her twin passions of art and teaching with the goal of achieving greater heights. 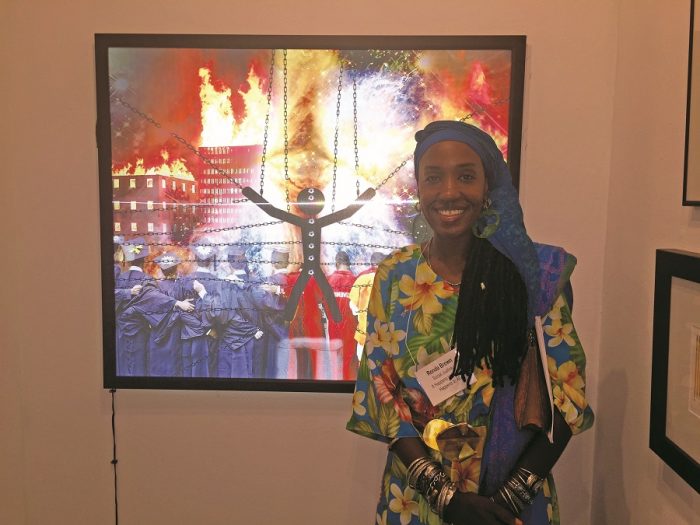 Brown’s digital collage, “JustUs is not 4All,” on display at Saint Mary’s College of Museum of Art in 2016. (Courtesy photo)

“In the next five years, I see myself as world renowned and my work in various collections,” she said. “I would like more people to view my art as an urban mystic sensibility through the canon of authentic hip-hop, spoken word and soul music morphed into multidimensional visual artworks.”