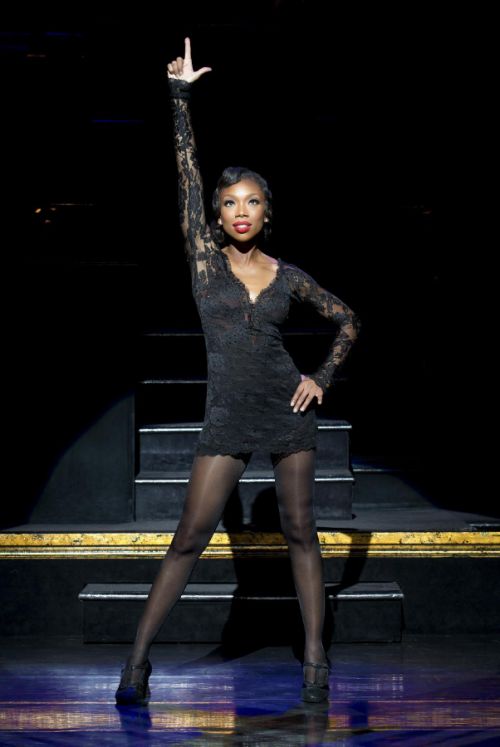 Brandy Norwood in the role of Roxie Hart during a performance of the musical “Chicago,” at the Ambassador Theatre in New York. Norwood will portray Hart through May 1, 2016 in Los Angeles. (Jeremy Daniel / AP)

Producers Barry and Fran Weissler and the Nederlander Organization announce that GRAMMY Award-Winner Brandy Norwood will play “Roxie Hart” when the production returns to Los Angeles at the Hollywood Pantages Theatre. Chicago the musical will play a limited one-week engagement from April 26 – May 1, 2016.

Norwood recently made her Broadway debut as “Roxie Hart” this past spring, playing a limited run in the Broadway production from April 28th through August 2nd 2015.

Entertainment Weekly raved “Norwood’s Broadway debut as the merry murderess comes with a wholly original array of Brandy-grade vocal twists. You’ve likely never heard a Roxie Hart riff like this before!” “Any way you put it, BRANDY’S CAREER IS ICONIC. She adds to all that as Roxie Hart in Chicago.”

A GRAMMY award-winning singer, songwriter and actress, Norwood has sold more than 40 million albums worldwide. She first stole our hearts with her multi-platinum self-titled debut album featuring the hit single “I Wanna Be Down.”

Her record “The Boy Is Mine” is the longest running number-one song and best-selling duet of all time. As an actress, Brandy has starred in her own sitcom, “Moesha,” and made history in Disney’s television film Cinderella as its first black princess, starring alongside her icon Whitney Houston. She recently received a 2014 NAACP Image Award for her role as Chardonnay on BET’s “The Game.”

It’s been a busy year for Norwood, who, in January will star in the new scripted BET series entitled Zoe Ever After. The series centers on Zoe Moon (Norwood), a newly single mom stepping out of the shadow of her famous boxer ex-husband while trying to balance dating, motherhood, and finally fulfilling her dream of starting a cosmetics line. Zoe Ever After will premiere on Tuesday, January 5th on BET. For more information, visit Brandy’s new blog at http://TheNextBrandyBlog.com

Tickets are currently available for purchase by Season Ticket Holders online at www.HollywoodPantages.com or by calling 866-755-2929 (Mon-Fri; 9:30am-5:30pm). Groups of 10 or more will be available on Thursday, December 17th by visiting www.PantagesGroups.com or by calling 866-755-3075. Individual tickets will go on sale to the general public on Sunday, February 21st at 10am PT online at www.HollywoodPantages.com or www.Ticketmaster.com or by phone at 800-982-2787. Ticket prices start at $29.

Complete casting for the L.A. Engagement of CHICAGO will be announced at a later date.