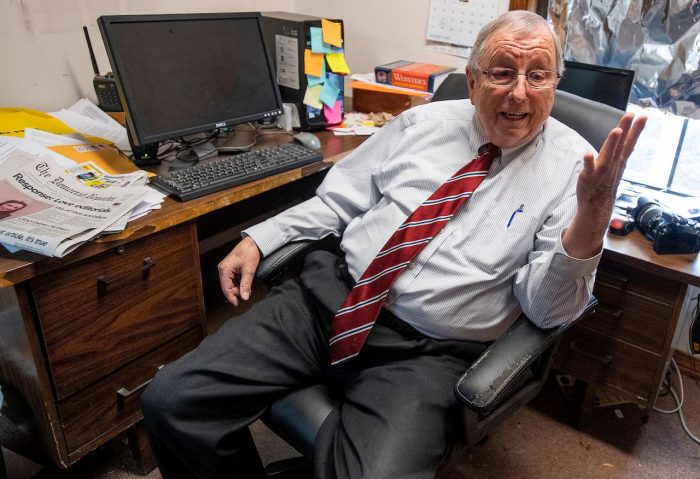 In this Thursday, Feb. 21, 2019 photo, Goodloe Sutton, publisher of the Democrat-Reporter newspaper, speaks during an interview at the newspaper’s office in Linden, Ala. Sutton, who advocated for a revival of the Ku Klux Klan in a newspaper editorial, is turning over control to a Black woman. The Democrat-Reporter, announced Friday, Feb. 22, 2019, that Elecia R. Dexter is taking over as the paper’s publisher and editor from Sutton. (Mickey Welsh/The Montgomery Advertiser via AP)

A White Alabama newspaper editor who advocated for the revival of the Ku Klux Klan is turning over control of the small weekly to a Black woman.

The Democrat-Reporter of Linden, Alabama, announced Friday that Elecia R. Dexter will take over as publisher and editor from Goodloe Sutton, who has run the 140-year-old paper since the 1960s.

Dexter, 46, told The Associated Press that Sutton will retain ownership of the newspaper, which has a circulation of about 3,000, “but I will handle everything else.”

Sutton had a history of publishing racially and ethnically insensitive editorials, and Dexter said she hoped her appointment would let the community know “this is everybody’s paper.”

“I think it can be helpful,” she said.

The change came the week after Sutton wrote and published an editorial that began: “Time for the Ku Klux Klan to night ride again.” The editorial said Democrats and “Democrats in the Republican Party” are plotting to raise taxes, so the Klan should raid their communities.

Sutton, in a subsequent interview with the Montgomery Advertiser, suggested lynchings as a way to clean up Washington. Sutton also questioned whether the KKK was violent, claiming America’s most feared White supremacist terrorist organization “didn’t kill but a few people.”

Auburn University and the University of Southern Mississippi quickly rescinded previous honors for Sutton, who won praise two decades ago for stories exposing corruption in the sheriff’s office. The Alabama Press Association censured Sutton and suspended the Democrat-Reporter’s membership.

Dexter, whose family is from rural Marengo County, where Linden is located near the Mississippi line, said she began working at the paper earlier this year and has a good working relationship with Goodloe. She added: “I told him there were some different ways you could have made your point.”

The paper has received emails from those who supported what Sutton wrote and others who were “disgusted” by his statements, she said.

The paper dates to 1879 and its editorials are consistently conservative and often critical of Democrats. The use of “Democrat” in its name reflects back to the period when nearly all White conservatives in the South were Democrats.