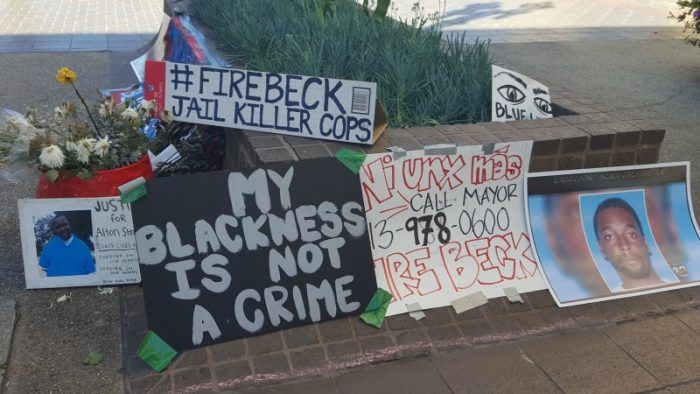 Members of BLMLA speak out against the wrongful killings of Blacks by LAPD. (Kimberlee Buck/L.A. Sentinel)

As we celebrate the life and two year anniversary of 18-year-old Michael Brown Jr. who lost his life due in 2014 to the senseless killing of a Ferguson, Missouri police officer, it is important that we as a Black community stand together. We must do what we can to legalize being Black in America.

Given the recent beatings, shootings and killings of African American men and women by police officers, more than 50 Black rights organizations from around the country have joined forces to release an agenda, “articulate a purpose” and embody a common vision.

“In recent years we have taken to the streets, launched massive campaigns, and impacted elections, but our elected leaders have failed to address the legitimate demands of our Movement. We can no longer wait,” said the Movement for Black Lives platform.

Not only have people of color launched campaigns, but they have also marched in front of buildings like City Hall, staged three week sit-ins and used their voices as a platform to ask for justice. Yet, political figures have failed to respond to these type of measures.

The agenda, A Vision for Black Lives: Policy Demands for Black Power, Freedom and Justice” which was released shortly after the Democratic National Convention (DNC) “was written as a response and way to come between the present-day political climate. Below is the list of their demands:

According to the Movement for Black Lives Matter, “This agenda continues the legacy of our ancestors who pushed for reparations, Black self-determination and community control; and also propels new iterations of movements such as efforts for reproductive justice, holistic healing and reconciliation, and ending violence against Black cis, queer, and trans people.”

Why is the agenda being released now? Some African Americans are hesitant to support democratic presidential candidate Hillary Clinton due to some of the policies that were enacted under her husband and former U.S. president Bill Clinton’s presidency.

Many Black activists believe the Clinton’s “lit the match” causing an increase in the number of African American males that are incarcerated.

To join the Movement for Black Lives Matter or for more information on the six demands, visit https://policy.m4bl.org/ and register as an individual or as part of an organization.