Josh Gibson was one of the most famous baseball players in the United States in the 1930s and 1940s, even though he never played in the Major Leagues because owners would not sign black players.  It is not exactly known how many home runs Gibson hit.  It is said to be 800-1,000.  But it is known that he hit more than anybody ever. Gibson was inducted into the Baseball Hall of Fame in 1972.

Barry Bonds is the all-time home run leader with 762 homers.  But because of a steroid scandal, he is not known as the Home Run King.  That title goes to Hank Aaron, who hit 755 home runs.  But he was never regarded as the greatest home run hitter of all time, as many believe that it was Babe Ruth, who hit 714 home runs.

There is one person who hit more home runs than all of them.

That is Josh Gibson.  Because Gibson was never allowed to play in the Major Leagues because white owners would not sign black players during his playing days, he was never given the credit that a man who hit well over 800 home runs should get.  Unfortunately for Gibson, the Negro Leagues did not keep accurate records of the player’s statistics.  Some believe that Gibson’s home run total may have topped 1,000, and for a career he had a .356 batting average, which was higher than Ruth’s average of .342.

Gibson was often called the “black Babe Ruth.”  But the arguments over which league was better between the all white Major Leagues and the all black Negro Leagues were so heated, some people called Ruth the “white Gosh Gibson.”  Gibson was that good.

Defensively, Gibson was a catcher who was known for throwing out base runners with ease.  Gibson was a 10-time All-Star and he was on two Negro World Series championship teams.

Gibson was born in Buena Vista, Georgia, in 1911.  His parents were sharecroppers, but they moved to Pittsburgh, Pennsylvania, during the Great Migration of blacks to the north because of racial segregation and the threat of violence from white Southerners.  Gibson’s father was given a job at the Carnegie-Illinois Steel Company, and their family lived on the north side of Pittsburgh.

Gibson was going to be an electrician after completing the ninth grade, but after taking up baseball at the age of 16, he was quickly recruited by the Pittsburgh Crawfords in 1928.  The Crawfords were the top black semi-professional team, but they would later become a major professional team in the Negro League.

Because black players could not play in the more stable Major League, they had to bounce from one league to another to profit off of their talents.  That has led to many people questioning the talent level that Gibson played against.

Critics who do not consider Gibson the greatest home run hitter will point out that he did not play against the best talent on a consistent basis.  But the same can be said about Ruth, because he did not have to compete against black players.  Because of Major League Baseball’s racist tactics during that time, no player competed against all of the greatest players of that time.

One thing is known, Gibson hit a 580 foot home run at Yankee Stadium that struck two feet from the top of the wall circling the center field bleachers.  Ruth, Lou Gehrig or Mickey Mantle never hit a ball that far, as it is known as the longest home run in Yankee Stadium history.  It has also been said that Gibson hit one home run out of Yankee Stadium, making him the only player to do that.

Gibson, and other black players, were not allowed to compete on what was thought to be the highest level of baseball.  If they had, there is no question that the record books would look different.

After Jackie Robinson broke the color barrier in 1947, Gibson would have been in line to get his chance in the Major Leagues, but his life was cut short, as he died just three months before Robinson made his debut with the Brooklyn Dodgers.

Gibson fell into a coma in 1943 and he was diagnosed with a brain tumor.  He refused to have the tumor removed, and he dealt with recurring headaches until he had a stroke in 1947, which ended his life at the age of 35.

It is believed that Gibson took issue with Robinson being selected by the Dodgers to become the first black player in the Major Leagues in about 50 years.  Gibson was regarded as the best Negro League player at the time, and he felt that he should have been given the chance that Robinson was selected to have.

Gibson was a trailblazer, as many young black athletes idolized him and played the sport because of him.  Looking at Major League’s home run leaders list, Bonds and Aaron are first and second.  Willie Mays is fourth.  Ken Griffey is sixth, and if he did not have to deal with major injuries later in his career, he probably would have broken the all-time record.  Frank Robinson is ninth.  It has been rumored that Ruth was part black.

There are a number of black players that are high on one of baseball’s most prestigious lists.  That is an amazing feat in a sport that has been historically white.

Categories: History | History (Sports)
Black History Month: Don Barksdale achieved many firsts on and off the bask...
Great Athletes Who We Could Learn From 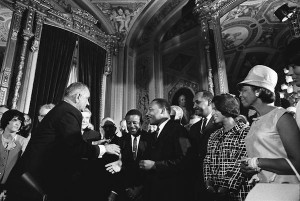 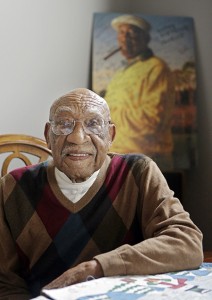 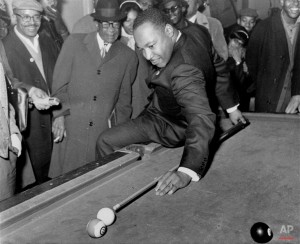