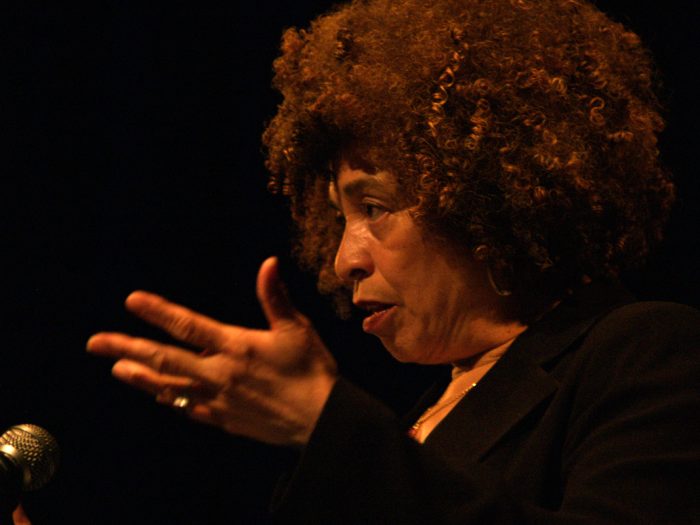 Reacting to the decision, Davis said that “although the BCRI refused my requests to reveal the substantive reasons for this action, I later learned that my long-term support of justice for Palestine was at issue.” (Photo: Wikimedia Commons)

Human and Civil Rights Activist Angela Davis turned 75 on Saturday, Jan. 26 and family, fans, and supporters took to social media and other platforms to salute the freedom fighter and Birmingham, Alabama native.

“Today [January 26] is Angela Davis’ birthday and we salute our freedom-fighting sister leader for her genius, wisdom and courage in America and throughout the world,” said National Newspaper Publishers Association (NNPA) President and CEO Dr. Benjamin F. Chavis, himself a well-known and lifelong civil rights activist.

“Today, we celebrate the birthday of activist/educator/author Angela Davis, who has spent decades fighting for civil and human rights all over the world,” Smithsonian Folkways tweeted.

Born Jan. 26, 1944, Davis became a master scholar who studied at the Sorbonne. She joined the U.S. Communist Party and was jailed for charges related to a prison outbreak, though ultimately cleared, according to biography.com.

Known for books like, “Women, Race & Class,” Davis has worked as a professor and activist who advocates gender equity, prison reform and alliances across color lines.

Davis grew up in a middle-class neighborhood dubbed “Dynamite Hill,” due to many of the African-American homes in the area that were bombed by the Ku Klux Klan.

She’s perhaps best known as a radical African American educator and activist for civil rights and other social issues and, according to her biography, Davis knew about racial prejudice from her experiences with discrimination growing up in Alabama.

As a teenager, Davis organized interracial study groups, which were broken up by the police. She also knew some of the four African-American girls killed in the Birmingham church bombing of 1963.

Meanwhile, on the eve of her birthday, CNN reported that an Alabama civil rights group that rescinded an award for Davis announced it had “learned from its mistakes” over the controversial move and have requested Davis accept the honor after all.

The move comes after the group’s board of directors last week issued a “public apology for its missteps in conferring, then rescinding, its nomination of Dr. Angela Y. Davis in early January.”

It is not known whether Davis will attend. CNN said it has reached out to her for comment.

Birmingham Civil Rights Institute President and CEO, Andrea Taylor, said in a statement that “Dr. Angela Davis, a daughter of Birmingham, is highly regarded throughout the world as a human rights activist.

“In fact, the Schlesinger Library at Harvard University’s Radcliffe Institute of Advanced Study acquired her personal archives in 2018, recognizing her significance in the movement for human rights, her involvement in raising issues of feminism, as well as her leadership in the campaign against mass incarceration. Her credentials in championing human rights are noteworthy.”

Withdrawing the award came after “supporters and other concerned individuals and organizations, both inside and outside of our local community, began to make requests that we reconsider our decision,” the institute’s board said in a statement at the time, according to the CNN report.

“Upon closer examination of Ms. Davis’ statements and public record, we concluded that she unfortunately does not meet all of the criteria on which the award is based,” the statement said.

Mayor Randall Woodfin, who said he regretted the board’s move, said protests were made “by some members of the community, Jewish and otherwise.”

Reacting to the decision, Davis said that “although the BCRI refused my requests to reveal the substantive reasons for this action, I later learned that my long-term support of justice for Palestine was at issue.”

Davis said she was stunned by the move.

“I have devoted much of my own activism to international solidarity and, specifically, to linking struggles in other parts of the world to US grassroots campaigns against police violence, the prison industrial complex and racism more broadly.

“The rescinding of this invitation and the cancellation of the event where I was scheduled to speak was thus not primarily an attack against me but rather against the very spirit of the indivisibility of justice,” she said.