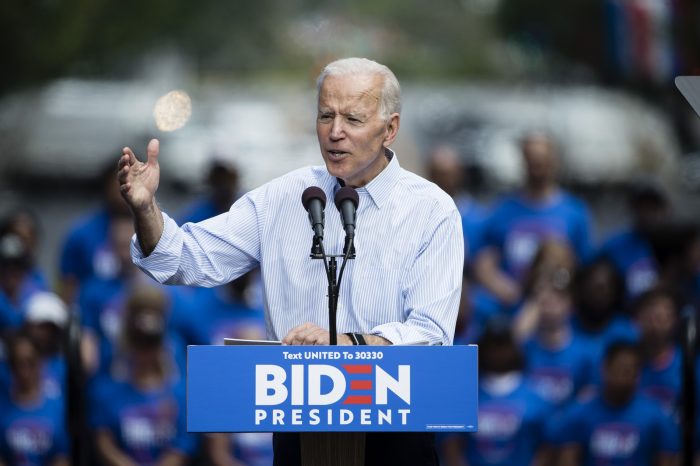 In this Saturday, May 18, 2019 file photo, Democratic presidential candidate, former Vice President Joe Biden, speaks during a campaign rally at Eakins Oval in Philadelphia. Biden is the only Democrat among presidential front-runners who will not appear at the California Democratic Convention Saturday, June 1, 2019. (AP Photo/Matt Rourke, File)

The center of presidential politics this weekend is the California Democratic Convention, but Democrats’ 2020 front-runner is almost 2,500 miles away, going it alone.

Joe Biden will headline an LGBTQ civil rights gala Saturday evening in Columbus, Ohio. It’s an appropriate venue for a Democratic White House hopeful on the first day of Pride Month, particularly for the former vice president who endorsed same-sex marriage in 2012 before his old boss, President Barack Obama.

Yet the decision also means Biden passed on the chance to address hundreds of Democratic activists and power players gathered in San Francisco, where 14 of his rivals are spending parts or all of the weekend. California will award more than 400 delegates to the 2020 national party convention _ about a fifth of what will be needed to win the nomination.

Biden sent aides in his place.

The Biden campaign says the vice president’s speech to the Human Rights Campaign gathering proves he wants to have conversations about LGBTQ rights “not just on the coasts of this country, but in the heartland and with any and all Americans.” But Biden aides declined to talk specifically about the decision to go to Ohio instead of California or how it might fit into broader strategy.

The trends, though, are clear: Joe Biden is running his own race at his own pace; and he’s embracing his status atop national and early nominating state polls with an itinerary and message seemingly focused more on a general election matchup with President Donald Trump than on dispatching the 23 other Democrats chasing him in the nomination contest.

Even his Ohio speech will target Trump. Aides say the former vice president will blast Trump’s policies on LGBTQ civil rights and tie the issue to Biden’s larger argument “that every American has the right to live with dignity and respect.”

That front-runner’s prerogative isn’t new: Politicians don’t have to follow a pack that they’re leading. But the approach is not without some risk. Biden faces a fractious Democratic base, with plenty of voters questioning both his more moderate record and whether a 76-year-old white man is the best fit for the party.

And, as the California gathering has shown in its opening hours, some of Biden’s rivals are getting more aggressive toward him, albeit subtly, even as Biden maintains that he will “never speak ill of a Democrat running for president.”

In his absence, Massachusetts Sen. Elizabeth Warren used her time in California to draw a distinction with Biden, even without mentioning his name.

“Some Democrats in Washington believe the only changes we can get are tweaks and nudges. If they dream at all, they dream small. Some say if we all just calm down, the Republicans will come to their senses,” Warren said, an allusion to Biden’s recent prediction that Republicans will have “an epiphany” once Trump is no longer president.

After skipping California, Biden is expected to miss an Iowa state party dinner that will draw a gaggle of candidates next weekend. He’s scheduled to be in the state two days later for his own itinerary.

Biden’s also expected to miss an upcoming South Carolina economic forum focused on the African-American community, though he will be in the state the following weekend for the state party convention.

He has yet to do a cable news town hall, as many of his rivals have completed or scheduled with CNN, MSNBC or Fox News.