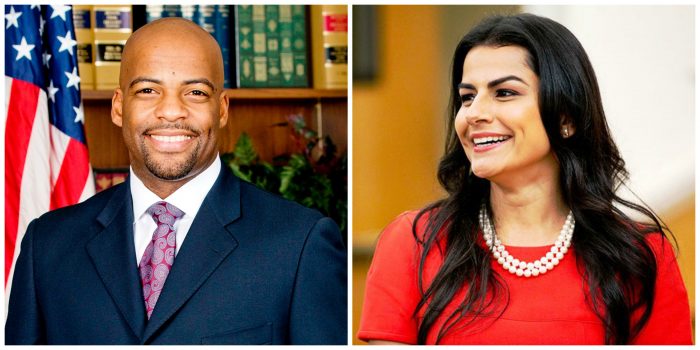 Hall’s campaign has read as an impressive fact list of why he is the best choice for the district citing experience, results and knowledge of district as factors.

“This has been an extraordinary opportunity for me to touch every region of this district,” said Hall at his Campaign Headquarters. “To have a coalition of supporters from the Latino community, [Asian and Pacific Islander] community, Caucasian community and the African American community.”

Hall has demonstrated his skills as a local leader and public servant from Sacramento to South Los Angeles a councilman, school board member, Assemblyman and State Senator. His fight would be for working with families, securing the largest increase in funding for education, expanding immigrant rights, and fighting for common-sense gun laws.

In July 2016, Governor Brown signed a package of bills creating the strongest gun violence prevention laws in the nation which included SB 880 by Hall and Senator Steve Glazer (D – Orinda). This bill closes the bullet button loophole in California’s assault weapons ban. The measure was approved by the State Assembly on a vote of 44 to 30 and had been approved by the State Senate in May on a vote of 24 to 14.

SB 880 specifically redefines an assault weapon to include military-style semi-automatic firearms that do not have a fixed ammunition magazine, requires such weapons to be registered with the California Department of Justice and prohibits the future sale, purchase or possession of such weapons in the state. SB 880 will take effect on January 1, 2017.

Barragán has been fighting for children and families since college. She’s helped immigrant families escape violence and kept them together. She also volunteered to help build homes for low-income families within the community and is currently an advocate  for children in foster care with special education needs.

Barragán has worked as a community advocate in Los Angeles as well as in Washington. She worked in President Bill Clinton’s White House and then at the NAACP – focusing on racial and social justice issues – and volunteered to ensure voters’ rights were protected at the polls during President Obama’s campaign.

Hall thanked all his supporters, friends and family for believing in him and his campaign. He spoke on his plans for the CD44 and the duties the representative of the district must uphold. Hall also spoke about how proud he was with his campaign and how it was conducted.

“It has been great being able to deliver a message and know, you didn’t have to go low when our opponents went low, and when they went low, we obviously went very, very high,” said Hall.