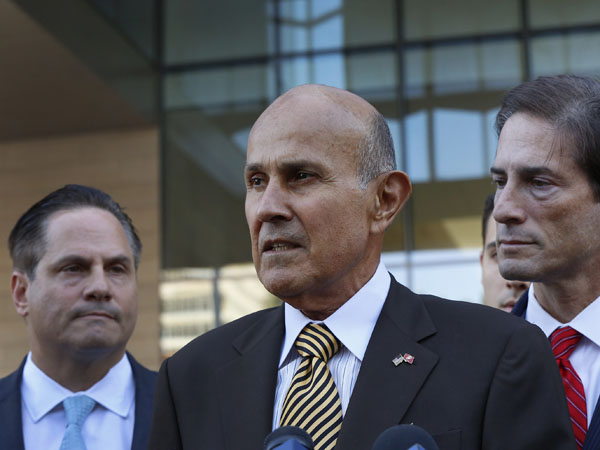 Ex-LA County Sheriff Lee Baca, with attorneys David Hochman (left) and Nathan Hochman, talks to the media as he leaves federal court in Los Angeles on Wednesday, after being convicted of obstructing an FBI corruption investigation of jails he ran and of lying to federal authorities.

A federal judge on July 20, rejected a bid by former Los Angeles County Sheriff Lee Baca to remain free on bail pending an appeal of his conviction for scheming to derail an FBI probe of corruption in the jails.

Baca, 74, was sentenced in May to three years in prison and began serving his sentence last Tuesday. U.S. District Judge Percy Anderson also ordered Baca to serve a year of supervised release following his prison term, and to pay a $7,500 fine.

Baca’s attorneys asked that the former lawman be allowed to remain out of custody while appealing his conviction on charges of conspiracy to obstruct justice, obstruction of justice and making false statements. In a nine-page ruling, Anderson found that Baca has “failed to raise a substantial question likely to result in reversal or new trial.”

“Both individually and collectively, the court’s evidentiary rulings were not (in) error and did not deprive defendant of his constitutional right to present a defense,” Anderson ruled. “Additionally, sufficient evidence exists to support defendant’s conviction on Count 3 (false statements) and defendant has failed to satisfy his burden to establish that his appeal is not for purposes of delay.”

During Baca’s two trials, prosecutors described the ex-lawman as being the top figure in the multi-part conspiracy, which also involved his former right-hand man, Paul Tanaka, and eight deputies who took orders from the sheriff.

Prosecutors had asked for a two-year prison term, noting that they would ordinarily seek about four years, but took into account Baca’s age and diagnosis of Alzheimer’s disease. During the sentencing hearing, however, Anderson excoriated Baca, telling him that if it hadn’t been for the ex- lawman’s health, Baca would have received the same five-year term given to Tanaka, the former undersheriff.

Anderson told Baca his Alzheimer’s diagnosis is not a “get-out-of-jail card.”

Baca — who ran the nation’s largest sheriff’s department for more than 15 years — was first tried in December on obstruction of justice and conspiracy to obstruct justice counts, and prosecutors had planned a second trial on the false statements count. But a mistrial was declared after jurors deadlocked 11-1 in favor of acquitting the former sheriff, and Anderson combined all three counts in the retrial. Baca did not take the stand in either trial.

The charges stemmed from events six years ago when a cell phone was discovered in the hands of an inmate at the Men’s Central Jail. Sheriff’s deputies quickly tied the phone to the FBI, which had been conducting a secret probe of brutality against inmates.

At that point, sheriff’s officials closed ranks and began an attempt to halt the formerly covert investigation by concealing the inmate-turned- informant from federal prosecutors, who had issued a summons for his grand jury appearance.

The charges against the various sheriff’s officials involved a host of illegal acts, including a 2011 incident in which two sheriff’s investigators confronted an FBI agent in the driveway leading to her apartment and falsely told her they were in the process of obtaining a warrant for her arrest. Baca denied having advance knowledge of the illicit attempt to intimidate the federal agent.

Prior to the first trial, Baca had pleaded guilty to the lying count, but subsequently backed out of the plea deal — which called for him to serve no more than six months in prison — after the judge rejected the agreement as too lenient. If Baca had not withdrawn from the plea, he could have been handed a sentence of five years behind bars. He was then indicted on the three felony counts for which he was subsequently convicted.

Baca became sheriff in December 1998 and won re-election on several occasions. He was poised to run again in 2014, but federal indictments unsealed in December 2013, related to excessive force in the jails and obstruction of that investigation, led Baca to retire the following month.

Baca’s attorney, Nathan Hochman, has argued that Anderson erred in barring jurors from hearing evidence of Baca’s “cooperation” with both the federal probe and an independent county review board, and that the panel should have heard about the ex-sheriff’s Alzheimer’s diagnosis.

The attorney also claimed the jury should have been allowed to consider evidence of improvements Baca made in the training of jail guards to de- escalate problems and successfully deal with violent and/or mentally ill inmates. Baca was not charged with any instances of jail brutality.

In addition to the 10 people convicted in connection with the Baca conspiracy case, 11 other now-former sheriff’s department members were also convicted of various crimes uncovered during the FBI investigation.