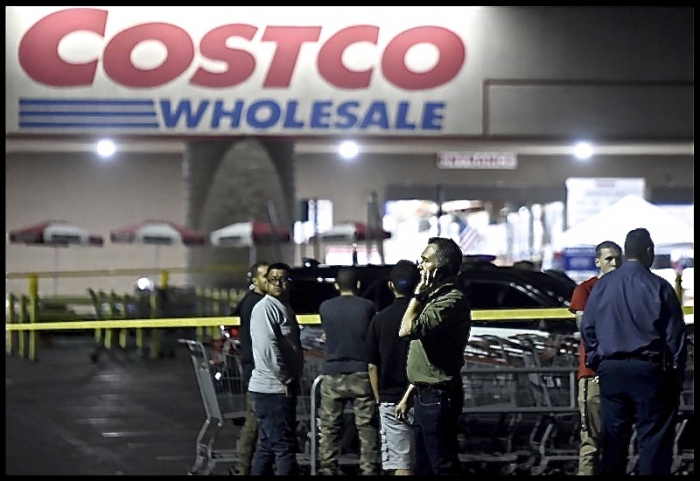 A Costco employee talks on the phone following a shooting within the wholesale outlet in Corona, Calif., Friday, June 14, 2019. An off-duty LAPD officer opened fire inside the store, killing a man said to be of special needs (and not on his routine medication) and wounding his parents, sparking a stampede of shoppers, the Corona police Lt. Je Edwards said. (Will Lester/Inland Valley Daily Bulletin/SCNG via AP)

A man fatally shot in a Southern California Costco store was mentally ill and off his medication when he pushed or slapped an off-duty police officer who opened fire and killed the man and critically wounded the man’s parents, the lawyer for the man’s family said Tuesday.

Attorney Dale Galipo said he didn’t know if there was any exchange between the officer and Kenneth French before the violence at the store in Corona, east of Los Angeles. Corona police have said French “attacked” the officer “without provocation” but Galipo said that overstated what French did.

“I would hardly characterize it as an attack,” Galipo told The Associated Press, describing it as an “open-handed push or slap” to the policeman’s back. “It certainly does not justify killing someone.”

The officer’s attorney, David Winslow, told the AP on Monday that the officer was holding his 1½-year-old son when French knocked him to the ground and he briefly lost consciousness. When he came to, Winslow said, “he believed his life and his son’s life were in immediate danger” and fired his handgun.

Galipo said he’d been told the officer identified himself as a policeman before he shot.

French, 32, of Riverside, lived with his parents and family members believe he suffered from schizophrenia, Galipo said. He and had been taken off his medication due to other health complications, which may have affected his behavior Friday night, Galipo said.

It was not clear what medications he had been taking or when he stopped taking them.

“It was my understanding that it just kind of helped him stay calm and not have any problems,” said Galipo, adding French had no history of violence and that family members have described him as gentle and non-verbal.

“It’s unclear whether she will survive,” he said.

French’s father, Russell French, is in serious condition but is conscious, the attorney said.

The officer, who has been with the LAPD for seven years, was interviewed Monday by LAPD investigators as part of the department’s administrative probe, Winslow said. He is on paid administrative leave that is mandatory after an officer-involved shooting.