Gifts will create an undergraduate scholarship and exhibits celebrating his achievements 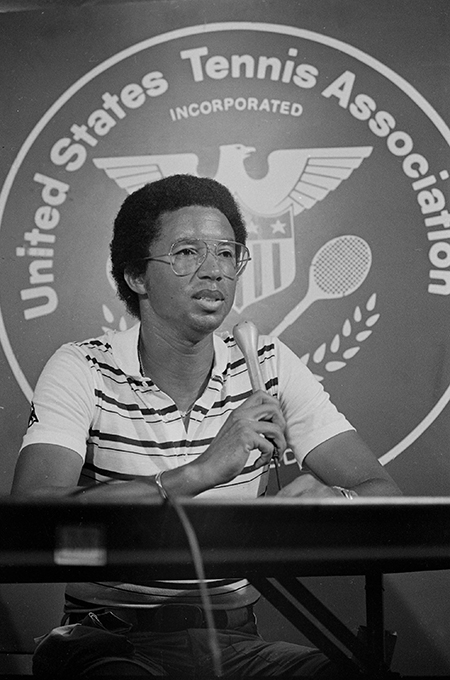 FILE – In this Sept. 7, 1980 file photo, tennis champion Arthur Ashe gives a news conference at the National Tennis Center in the Queens borough of New York. Ashe, who retired from tennis after a heart bypass operation, was named the new captain of the U.S. Davis Cup Team. (AP Photo/Dave Pickoff)

Arthur Ashe, the barrier-breaking tennis champion whose civic and social activism rivaled his sports achievements, is one of UCLA’s best-known alumni. Now, thanks to gifts from his widow Jeanne Moutoussamy-Ashe and the Arthur Ashe Learning Center, his legacy will live on in the form of an UCLA undergraduate scholarship and physical and online exhibits celebrating his life and multiple careers.

UCLA’s newly acquired exhibit materials include numerous photographs by Moutoussamy-Ashe, whose work has been exhibited at major museums and galleries, including the Smithsonian and the National Portrait Gallery in Washington, D.C. She has also worked actively on social, health, and community-based issues.

Moutoussamy-Ashe founded the Arthur Ashe Learning Center, a nonprofit that promoted her late husband’s legacy through educational programming and exhibits to raise public awareness about his life and values. AALC selected UCLA to continue this work, as the nonprofit wound down its activities this year.

“This is a truly special moment for UCLA, and we are grateful to have been entrusted with Arthur Ashe’s towering legacy,” said Patricia Turner, dean and vice provost of undergraduate education. “The scholarship and exhibit materials are tangible reminders of his transformative impact on the world.”

The endowed Arthur Ashe scholarship will be awarded based on merit and need to students who exemplify the ideals Ashe displayed as a UCLA student. The Arthur Ashe Legacy Fund will administer the programming and exhibit materials, including photographs, art installations and video footage, some of which have already been installed in various campus locations. These materials highlight Ashe’s contributions in four main areas: sport and tennis; service and citizenship; health and wellness; and youth and education. The Arthur Ashe Learning Center gift also provides support for the maintenance of the exhibit materials and related educational programming based on fundraising conducted over the past few years.

“Thanks to the support of our incredible donors and supporters, the AALC has been able to put together content that allows Arthur to tell his own story,” Moutoussamy-Ashe said.

These gifts are part of the $4.2 billion UCLA Centennial Campaign, which is scheduled to conclude in December 2019 during UCLA’s 100th anniversary year.

The recipient of a fully funded tennis scholarship, Ashe captained his team to an NCAA championship and won the NCAA singles title, both in 1965. A year later, he graduated with a bachelor’s degree in business administration and went on to West Point, where he reached the rank of second lieutenant in the Army. Ashe would go on to win more than 50 professional tennis titles, including three Grand Slams, and was the first African-American man to win the U.S. Open and Wimbledon.

Both during and after his playing career, Ashe worked to raise awareness for many issues, including protesting apartheid in South Africa, the U.S. policy toward Haitian refugees, and health care deficiencies in urban minority communities. He also served as spokesman for the American Heart Association. Recognizing how after-school sports could teach life lessons and improve long-term educational attainment, he helped establish multiple tennis and education programs throughout the country. He used his celebrity status to advocate for mentoring, for accountability in educational outcomes and to inform the public about AIDS.

A highly respected and sought after public intellectual, he wrote numerous essays and several books, including the acclaimed “A Hard Road to Glory: A History of the African American Athlete,” in addition to teaching at Florida Memorial College. At UCLA, the Ashe Student Health and Wellness Center was named in his honor in 1997.

“It is hard to imagine a better home for Arthur’s legacy. He made a lasting impact in areas ranging from athletics to education to health to service — all of which are prominent components of UCLA’s mission,” Moutoussamy-Ashe said. “UCLA represents much of what he stood for and continues to pass those values on to the next generation.”

UCLA was where Ashe received a stellar education, learned life lessons, enjoyed vibrant discussions with people from all walks of life, and became close to his lifelong best friend, Charlie Pasarell, Moutoussamy-Ashe said.

“UCLA meant the world to him and is the perfect place to safeguard his legacy,” she said. “I am excited to see his inspirational example shared with students, faculty, and visitors to UCLA.”

Turner, who teaches a Fiat Lux seminar on Ashe, said, “He came to UCLA with the backdrop of the civil rights movement and segregation. If [our students] can learn from Ashe’s life how to sustain personal and professional integrity, how to handle setbacks with grace, and how to play the long game, they will lead lives of distinction and purpose.” 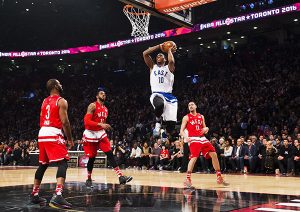 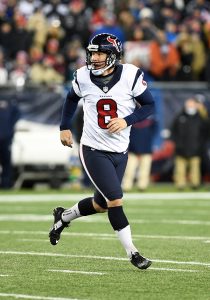 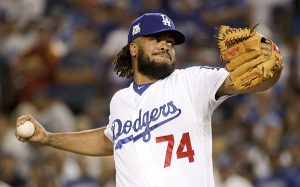 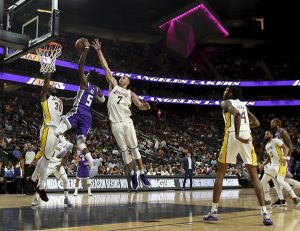 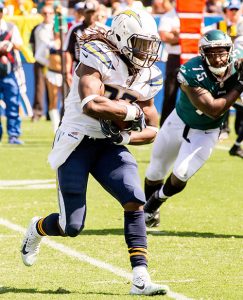