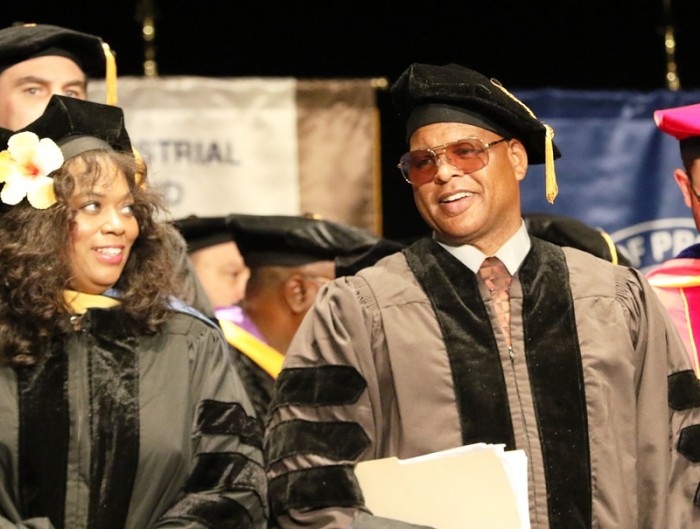 The son of the city of Los Angeles’ first African-American firefighter, Aquil Basheer is no stranger to the city’s diverse and complicated issues to prevent violence; he has been a soldier in the effort for over 40 years. Recognizing his commitment, the Chicago School of Professional Psychology honored him with an honorary Doctorate of Humanities, honoris causa during their 2015 commencement ceremony last week at the Pasadena Civic Auditorium.

Following a rousing ovation by the 400 soon-to-be psychology professionals – many of whom had a unique opportunity to enhance their knowledge in forensic psychology by participating in Basheer’s 16-week Professional Community Intervention Training Institute (PCITI) – the honoree and guest speaker issued a few words of encouragement to the Class of 2015.

“You have been equipped with the tools to set the standard for which others will measure themselves,” Basheer told the graduates. “You will bring answers and solutions to many of the ills that govern our society today.”

With more than 4,200 students at campuses in Chicago, Los Angeles and Washington, D.C., the Chicago School of Professional Psychology has been an innovator in the field of psychology and related behavioral science since 1979.

The school partnered with the practitioner based PCITI development academy, which trains and certifies frontline community peacekeepers, emergency first responders and community stakeholders, on proven strategies to reduce violence of all kind in the Greater Los Angeles community. The PCITI was adopted as a model for gang intervention training by the Los Angeles City Council.

In June, Basheer evoked the reality of gang warfare, but acknowledged the possibility of peace in his first book, Peace In the Hood: Working with Gang Members to End the Violence. The book is serving as an empowering tool to help local residents address the negative behavior, aggression and interpersonal hostilities impacting their communities. Earlier September this year, “License to Operate,” an award-winning documentary highlighting Basheer’s work in Los Angeles, was released nationwide.

Praising the school for its commitment to serve those who traditionally avoid mental health services, Basheer views the relationship with the Chicago School as a “win-win” situation.”

“All of you graduating today have been forged under pressure through an extremely prolonged process,” Basheer said, challenging each student to go out and go out with the goal to leave an imprint in society.

“You know more about yourself now than you ever did. Through that refining process, you have assumed the ownership of leadership. I salute you, I admire you, I respect you, and will always be there for you.”