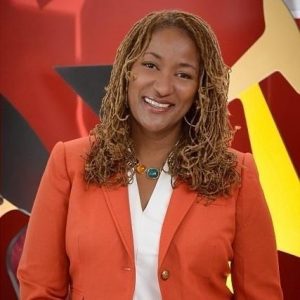 Governing Institute’s Women in Government Leadership Program highlights the outstanding contributions of women currently in public office, provides leadership development and job critical skills during three summits, and creates a network to pay it forward by mentoring the next generation of women leaders to run for office. Senator Mitchell is the first member of the Class of 2017 to be selected; the full cohort of 25 elected state and local women leaders will be announced in July 2016.

Senator Holly J. Mitchell has served in the state legislature since 2011 and in 2014 was elected to serve the residents of the 30th Senate District in California. Senator Mitchell belongs to the Senate’s official leadership, chairing the Budget Subcommittee on Health and Human Services and serving on the Rules, Health, Insurance, and Labor Committees. She also founded the Senate Select Committee on Women and Inequality. All 49 of the bills Senator Mitchell has delivered to the Governor’s desk during her five years in the legislature have been signed into law. Most of the bills focus on expanding human services, women’s reproductive rights, environmental justice, fighting the trafficking of minors and the undocumented and, above all, reducing the numbers of children growing up in poverty.

“Having had the privilege of working with Lois DeBerry through her leadership in the National Black Caucus of State Legislators and as a founding member of the National Organization of Black Elected Legislative Women, I observed firsthand the care and commitment that made her a trailblazer among women of color engaging in advocacy for neglected communities,” remarked Senator Mitchell. “I continue to draw inspiration from the relentless compassion she personified as a legislator. I accept this award in grateful tribute to her memory and achievements.”

“The Governing Institute is grateful to the State Legislative Leaders Foundation (SLLF) for its generosity in honoring the contributions of Rep. Lois DeBerry, and we are thrilled to welcome Sen. Mitchell as the first member of the Class of 2017,” said Julia Burrows, director of the Governing Institute. “Together, we are investing time and resources to support women in government who truly make a difference in their communities and in this country.”

Stephen G. Lakis, President and Chief Executive Officer of the State Legislative Leaders Foundation (SLLF), echoed his support for Senator Mitchell’s selection as the DeBerry Scholar: “Senator Holly Mitchell is just the kind of dedicated public servant the Lois DeBerry Scholarship was designed to honor. Like Rep. DeBerry, Holly has devoted her career to fighting for the rights of our nation’s most vulnerable citizens (and those who would one day hope to be citizens!). Lois would be proud to have her name associated with this fine public servant!””

About the Governing Institute

Governing is a division of e.Republic, the nation’s only media and research company focused exclusively on state and local government and education.

The SLLF is a nonprofit, nonpartisan organization dedicated to professional development for our nation’s current and future state legislative leaders. The constituency includes Speakers of the House, Senate Presidents, Majority Leaders, Minority Leaders, and Pro Tempores. And through the Emerging Leaders Program, the SLLF offers mentoring to first- and second-term legislators who have been identified by their peers as future leaders.