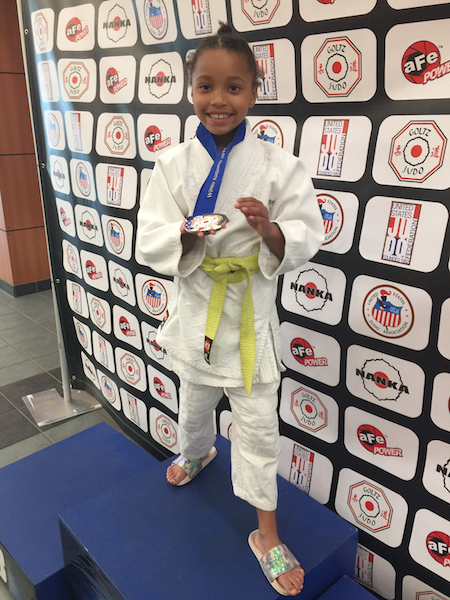 Two years ago, eight-year-old Johana Harewood-Pope became a student of judo and jujitsu kai. Now, she is the best judo competitor in her division in the entire country, after winning the 2018 Winter Nationals in December!

Recently, the Los Angeles Sentinel spoke with the young athlete and her father, Dr. Blaine Pope, to discuss the Judo Winter National Tournament and her plans for the New Year.

In April of 2016, Harewood-Pope began practicing judo at a YMCA program in Santa Monica led by one of her coaches, Jim Nieto. This fifth degree black belt has been teaching judo and jujitsu for over 50 years, having temporarily trained the widely known judo player, MMA fighter, and professional wrestler, Rhonda Roussey.

When Harewood-Pope isn’t practicing at the YMCA with coach Nieto, she is training with her other coach and father, Blaine, a former nationally ranked UC Berkeley collegiate competitor and first degree black belt.

“My favorite thing about judo is throwing people around,” stated Harewood-Pope during the interview.

Her passion for judo was ignited after learning her father practiced the sport. Soon after, she wanted to follow in his footsteps.

“I’m the kind of parent where I don’t want to make it feel like it is totally forced on her, but given that I have done judo and I have had a successful career back in my college days and still enjoy the sport, I thought, well let’s give it a try and just see what happens,” said Blaine.

Harewood-Pope’s hard work paid off in December of 2018, when she joined the other 800 plus competitors who made it to the winter nationals held at Azusa Pacific University in Azusa, CA.

“It [going to nationals], was really scary because it was my first time and it was a new experience so I didn’t know what it would feel like. I was so nervous the whole day,” said Harewood-Pope.

Despite her nervousness, the athlete was able to push through and take home first place in the 27 kilogram novice division.

“Johana surprised all of us—coaches, parents, and opponents—with the skill she recently displayed on the mat,” said Blaine in a statement.

“If her performance at winter nationals is anything to go by, then Jo has a very promising future in this sport.”

Aside from judo, Harewood-Pope also holds a belt in jujitsu as part of her combined judo and jujitsu program.

When Harewood-Pope isn’t in judo or jujitsu practice, she can be found playing the viola in her music lessons, drawing, and spending time with her family and cat Mimi.

What’s next for the judo champion?  More practice and a trip to Tokyo to see the 2020 Olympics.

“We are planning to see judo in the point of its origin,” said Blaine.

“It turns out by way of context the first tournament Johana ever saw was judo in the 2016 Rio Olympics.”

During the interview, the Sentinel posed a question about the importance of young Black girls and women practicing a self-defense sport.

This provided an opportunity for Blaine to discuss the birth of the #MeToo Movement and how that reinforced him of the usefulness of judo, learning self-defense, and building self-confidence.

“It is particularly good for young girls to know how to defend themselves in a very literal sense but there are other things that are well less measured in martial arts,” he said.

“[For example], there tends to be a heightened sense of situational awareness, and how to study people and read people and their body language before anything jumps off and I think that’s important.”