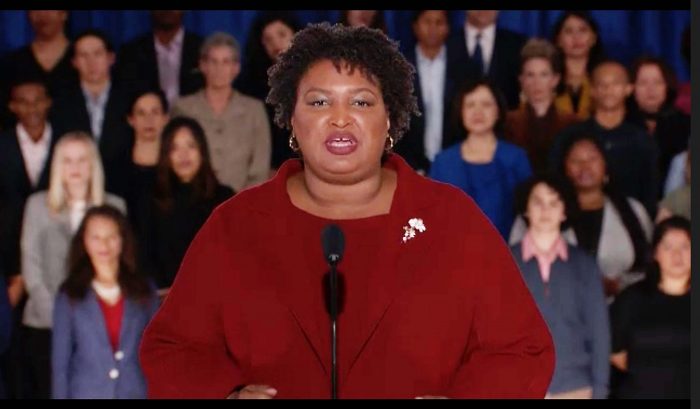 Stacey Abrams may not be the governor of Georgia, but she did make history on Tuesday, Feb. 5.

After patiently waiting in the wings as President Donald Trump used 90 minutes to deliver what was supposed to be a 45-minute State of the Union Address, Abrams provided a scathing Democratic rebuttal to the president’s highly-scripted speech to Congress on Tuesday, Feb. 5.

In doing so, Abrams became the first Black woman for either party to deliver a formal response to the State of the Union.

Speaking firmly and with a fervor that has earned her the national stage, the former Georgia Gubernatorial candidate said the “hopes of American families are being crushed” by Republican political leadership.

“In Georgia and around the country, people are striving for a middle class where a salary truly equals economic security,” Abrams said.

“But instead, families’ hopes are being crushed by Republican leadership that ignores real life or just doesn’t understand it.”

The response is a tradition undertaken by a representative of the president’s opposing party, who gives a speech immediately after the State of the Union to rebut claims made in his address.

According to CBS News, the first rebuttal was delivered by Republican Sen. Everett Dirksen and Rep. Gerald Ford in response to President Lyndon B. Johnson’s 1966 State of the Union. Since 2011, there have been responses in English and one in Spanish given by a separate speaker.

The address has usually been given by a member of Congress or a sitting governor, making Abrams an intriguing choice given she doesn’t currently hold a political office.

Only one other time has an elected official not holding statewide or federal office given their party’s response: Elizabeth Guzman, a Democratic member of the Virginia House of Delegates, delivered the Spanish-language response for Democrats in 2018, CBS reported.

However, since losing her gubernatorial bid, Abrams has said she is open to running for political office again.

Abrams talked about family values – taught by her parents.

In one instance on a cold winter night, her family went looking for her father and when they found him walking along a road, he was shivering and without a coat.

“He had given his coat to a homeless man,” Abrams said. “I knew he would still be alone when I left him, but I knew you were coming for me,” she said, relating her father’s words.

“I hold fast to my father’s credo, we are coming for a better America,” Abrams said.

Abrams noted McConnell’s recent verbal assaults on a House Democratic voting rights and an election bill that he has labeled a Democratic “power grab.”

“Voter suppression is real … we can no longer ignore these threats to Democracy. We cannot accept efforts to undermine our right to vote,” Abrams said.

“This is the next battle for our democracy, one where all eligible citizens can have their say about the vision we want for our country,” she said.

“We must reject the cynicism that says allowing every eligible vote to be cast and counter is a ‘power grab.’”

She blasted Trump and McConnell noting the missed paydays and the struggles of more than 800,000 federal workers who could still face another shutdown in just a couple of weeks because Trump wants to build a $5 billion wall on the southern border.

“Just a few weeks ago, I joined volunteers to distribute meals to furloughed federal workers. They waited in line for a box of food and a sliver of hope since they hadn’t received a paycheck in weeks,” Abrams said.

“Making their livelihoods a pawn for political games is a disgrace,” she said.

“The shutdown was a stunt engineered by the president of the United States, one that defied every tenet of fairness and abandoned not just our people, but our values.”

Trump, who continues to garner headlines over a myriad of alleged misdeeds, misstatements, and the division that’s enveloped the country since he took office, called for bipartisanship in his address.

He claimed outstanding records on jobs and the economy and America’s global standing. He also again took credit for low African American and Latino unemployment, saying more people – 157 million – are working now than anytime in the past in America.

The president also talked about the 300 or so judicial nominees that are in the Senate, ignoring that President Barack Obama’s high court choices were blatantly disregarded by the Republican-controlled Senate.

Abrams, who was once the Democratic Leader in the Georgia House of Representatives, dismissed those claims.

Abrams also firmly rebutted the notion that the Trump administration has the best ideals for the country going forward.

“We may come from different sides of the political aisle, but our joint commitment to the ideals of this nation cannot be negotiable,” she said.

“The Republican tax bill rigged the system against people. Wages struggle to keep pace with the cost of living. We owe more to the folks who keep our country moving.”

“We know bipartisanship can craft a 21stcentury immigration plan, but this administration chooses to cage people. Democrats stand ready to secure our borders, but we must understand America is made stronger by immigrants, not walls.”