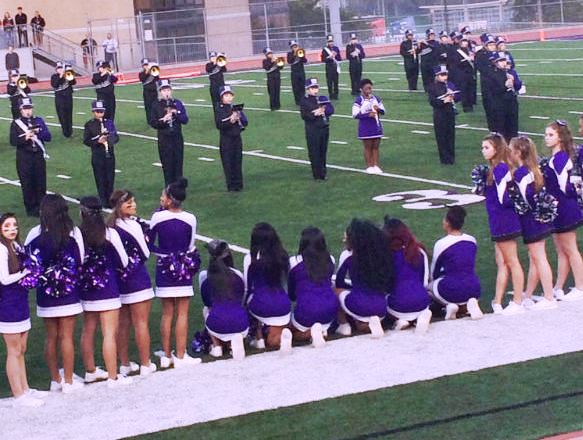 Six Omaha Central High cheerleaders followed in the footsteps of three University of Nebraska football players and other athletes across the country who have silently knelt during the national anthem.

The girls said they took a knee before Friday night’s game against Lincoln High to protest racial injustice and recent police shootings, the Omaha World-Herald reported .

The cheerleaders also said they made the decision to kneel shortly before the game. Football players were not on the field during the anthem.

“We don’t hate America,” said junior Taichelle Butler when asked about the gesture. “We want America to be greater.”

The cheerleaders’ protest follows that of Nebraska football players Michael Rose-Ivey, Mohamed Barry and DaiShon Neal, who each took a knee on the sideline as the anthem was sung at Northwestern last week. Their action sparked statewide debate about whether it was an appropriate setting for their protest. Rose-Ivey is set to meet next week with Gov. Pete Ricketts, who publicly criticized the players’ protest as “disgraceful” and “disrespectful.”

The Omaha Central cheerleaders said they, too, wanted to bring attention to social issues that have been roiling the country, and they plan to kneel at future games and encourage other students and fans to join them.

Foster’s mother, LaShanda Loftin, said she was proud to see her daughter take a stand.

“There’s unjust things going on with African-Americans in the United States, and we feel it as black people,” Loftin said. “She asked me if she should do it, and I told her to do what’s in her heart.”