The weather was a steamy 82 degrees on August 16 around 5 p.m. when men in black t-shirts began gathering in Carroll Park in South West Baltimore. While families hung out at the park’s picnic tables, or strolled along in the grass, the men were getting set to walk 35 miles from Baltimore to the White House in Washington, D.C. They were walking, they said, to raise awareness about Baltimore City’s ever-growing violence problem.

Some of the roughly 40 men, members of the group 300 Men March, rested. Others stretched. A group of women in white t-shirts were also gathered. It would be their role to support the men by seeing them off, bringing them supplies and driving them back to Baltimore when the journey was complete.

Why were they walking? “We have to,” said Munir Bahar, who co-founded the group three years ago with Baltimore City Council Member Brandon Scott. “The current reality and what’s happening implies that much, much more has to be done to stop the murders. We feel that we have to be a symbol of physical commitment.”

Baltimore has had 211 homicides this year while the District has had 97.

Bahar said that the journey was their way of are showing people that it’s time to come from behind their television and computer screens and join them in the fight.

And to skeptics who might not see why the walk can help, Bahar said, “See how you feel when your child gets shot and what you want to do. There are a lot of skeptics but those people sit on the sidelines. We are effective.”

Councilman Scott said the civil rights walks that have come before this would be in the forefront of his mind. “You can’t help but think about history – what folks walked for before for me to be able to have the opportunities that I have,” he said. “For me to not be the best person I can be and take steps forward and put myself out there and work as hard as I can every day…is a direct disrespect to them.”

Just before the group’s 6:30 p.m. departure, Bahar gathered everyone together for a speech. He said that the status quo wasn’t good enough when it comes to saving lives in the city. He said the group had put together a plan that would raise $1.7 million for things like youth services in the most violent parts of Baltimore.

The marchers arrived at the National Mall at 2 p.m. Monday afternoon. Scott said they were able to meet with White House staffers to talk about 300 Men March and ways of reducing violence. He said they used the time to explain who they were and why they were a necessary solution.

When they reached their destination, marchers were greeted by the women who had seen them off on Sunday. 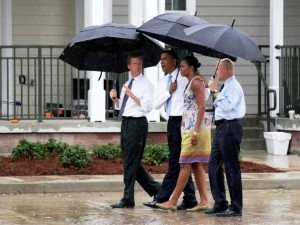 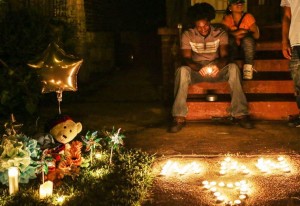