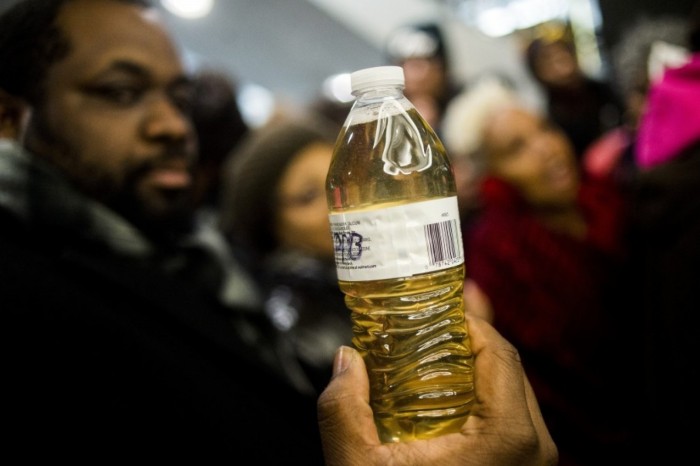 The Rev. David Bullock on Thursday holds a bottle of Flint water outside of the Romney Building, home to Gov. Rick Snyder’s office in Lansing. (Jake May/The Flint Journal-MLive.com/AP)

DETROIT (AP) — Michigan’s attorney general in 2016 promised to investigate “without fear or favor” the scandal over Flint’s lead-tainted drinking water and pledged that state regulators would be locked up for fudging data and misleading the public.

Yet three years later, no one is behind bars. Instead, seven of 15 defendants have pleaded no contest to misdemeanors, some as minor as disrupting a public meeting. Their records eventually will be scrubbed clean.

That has angered some people in Flint who believe key players who could have prevented the lead disaster are getting off easy. Four of five people at the state Department of Environmental Quality who were on the front line of the crisis have struck deals. The remaining cases mostly center on a deadly outbreak of Legionnaires’ disease and early disastrous decisions to use water from the Flint River.

“I’m furious — absolutely furious,” said LeeAnne Walters, a mother of four who is credited with exposing the lead contamination. “It’s a slap in the face to every victim in the city of Flint.”

Walters, 40, said she was repeatedly brushed off by the Department of Environmental Quality, known as DEQ, even as she confronted officials with bottles of brown water. She testified in Congress after then-Gov. Rick Snyder in 2015 finally acknowledged the lead mess, and she later was honored with an international prize for grassroots environmental activism.

“Instead of people being held accountable, they’re getting a free pass,” Walters said. “The fact remains there wouldn’t have been a problem with the lead and the legionella if the water had been treated properly, if MDEQ would have done their job.”

Flint was one of the worst man-made environmental disasters in U.S. history. While waiting for a new pipeline to bring water from Lake Huron, the majority-black city of 100,000 pulled water from a river in 2014-15 without treating it to reduce corrosive effects on old pipes. Lead infected the distribution system in Flint, where 41 percent of residents are classified by the government as living in poverty.

Due to poor finances, Flint was being run by financial managers appointed by the governor. The uproar over water quality reached a peak by fall 2015 when a doctor reported high levels of lead in children, which can cause brain damage. The water no longer comes from the river and has significantly improved, but some residents are so distrusful that they continue to use bottled water.

Liane Shekter Smith, who was fired as head of Michigan’s drinking water office, was charged with misconduct in office and neglect of duty. Special prosecutor Todd Flood later put her on notice that he would pursue an involuntary manslaughter charge, arguing that she could have shut down the Flint water plant and reduced the threat of legionella bacteria, which causes Legionnaires’.

But charges were dropped on Jan. 7 in exchange for a no-contest plea to an obscure misdemeanor that will not result in any jail time: disturbance of a lawful meeting. She had declined to accept a report about water quality from Walters and others. Two other key agency employees, Michael Prysby and Stephen Busch, made deals on Dec. 26. All three will have their records erased if they cooperate with Flood.

State Sen. Jim Ananich of Flint, who runs his water through a filter, said he’s listened to frustrated residents.

The outcome so far is different than the dramatic scene in 2016 when Attorney General Bill Schuette, a Republican who was poised to run for governor, traveled to Flint to announce felony charges against Prysby, a DEQ engineer, and Busch, a DEQ regional supervisor.

Andy Arena, a Flint water investigator and former head of the FBI in Detroit, believes the plea deals are appropriate.

“There are culpable folks out there that we need to get to,” he said. “This is how it works: You cut deals with certain people to move the case up the line. I believe these people have some information that could significantly assist in our ongoing investigation.”

Schuette, who lost the governor’s race and is out of public office, said: “I stand with Andy,” referring to Arena. Flood declined to comment on his strategy.

The new attorney general, Dana Nessel, has asked a Detroit-area prosecutor to review the remaining cases , including involuntary manslaughter charges against Nick Lyon, the former head of the Michigan health department who has been ordered to trial.

Lyon is accused of failing to alert the public in a timely manner about the Legionnaires’ outbreak, which has been linked to foul water and at least 12 deaths. Dr. Eden Wells, who was Michigan’s chief medical executive, also is facing an involuntary manslaughter trial, although both cases are tied up in appeals by aggressive defense teams.

Gerald Ambrose and Darnell Earley, who were state-appointed emergency managers when Flint was using river water, are also charged. They’re accused of being obsessed with saving money instead of protecting residents. All have pleaded not guilty.